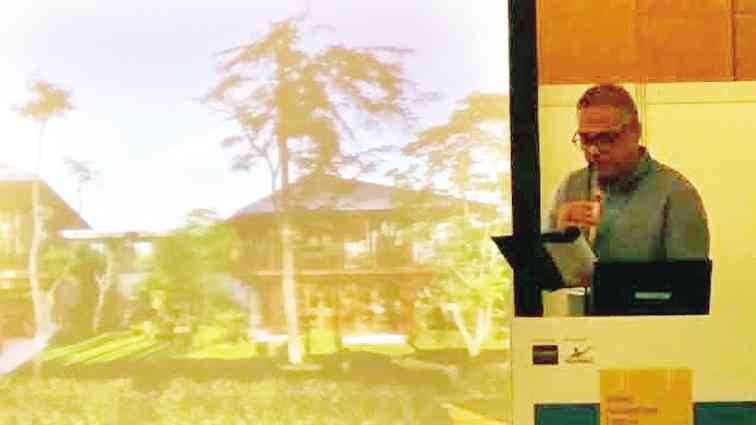 SINGAPORE—For the first time, a Filipino is on the shortlist of this year’s World Architectural Festival (WAF), the world’s largest annual gathering of architects and interior designers.

“I felt very fortunate to be able to share my work with the global architecture and design community,” said Emmanuel “Manny” Miñana after giving a truly laudable presentation of Villa Marina, the Tantoco family’s home in Santa Elena, Laguna.

The suburban home was inspired by the bahay-na-bato (stone house) from the Philippines’ Spanish colonial past.

Miñana, whose work is well-regarded in the country, received a rousing round of applause for his presentation before a packed audience and WAF’s three-member panel of international judges.

His family and some colleagues flew to Singapore to give him moral support, including his team from Emmanuel A. Miñana and Associates (Eama) as well as John Samonte, Jorge Yulo, Christian Guerrero, Anthony Nazareno, Alfred Wieneke, Ariston Tan, Ed Calma, Bong Recio, Meloy Casas, Paolo Alcazaren and Elizabeth Reyes.

“Villa Marina truly celebrates the Filipino design aesthetic as reflected in its architecture, interiors and landscape design, even in its lighting. This project integrated technology with context, climate and cultural diversity, infusing the Filipino vernacular with contemporary vision and global appeal,” Miñana said of his presentation.

Also in the audience was Bienvenido “Rico” Tantoco Jr., Villa Marina’s proud owner who also flew in to support Miñana.

The pride in what was really an astounding example of Filipino-Spanish architecture and modern sustainability was evident, not just in Tantoco’s face but also in the support the Tantoco family lent Miñana in producing his presentation.

“My clients really gave us their full trust and confidence, which resulted in our giving them all our best efforts,” said Miñana.

Client participation was key in the WAF judges’ decision. They asked each architect on the shortlist how one was able to manage the client’s expectations, given the limitations of the land, weather and Mother Nature. All four shortlisted in the villa category came from earthquake-prone regions.

“Each one really had to exhibit one’s architectural ambition while serving the needs of the homeowner,” Miñana said after the event.

“However big or small a project… architects must strive to imbue their work with passion. There must also be a strong vision of the project as a result of a sense of clarity that stems from purposeful problem-solving; and ultimately, there must be an inner drive to be able to come up with a big, bright idea you can really share with the rest of the world,” he explained, reflecting on his takeaways from the global gathering.

Over 200 shortlisted projects from all over the globe, covering all aspects of architecture and interior design, were showcased at WAF, held at the Marina Bay Sands Convention Centre in Singapore.

Over 2,000 architects, interior designers, firms, related suppliers and industry partners bore witness to presentations on some of the most innovative and sustainable construction work in the world today.

This year’s Villa award went to The Dune House, a private residence on the east coast of New Zealand’s North Island, by Fearon Hay Architects, while the event’s most coveted World Building of the Year award went to The Chapel, a community space in Ho Chi Minh, Vietnam, by a21 studio.

The World Interior of the Year award went to Mott32, a bank vault-turned-restaurant, by Joyce Wang Studio in Hong Kong.

There was also an award for Stars of the Future, given to architectural students.

Six teams from universities all over the world participated in this category, including promising future architects from University of San Carlos in Cebu City, who were the previous year’s winners.

When asked whether he would be participating in WAF 2015, also in Singapore, Miñana answered, “I will definitely attend next year. As to presenting our work… one never knows until the WAF sends out its auspicious announcement next June that one’s entry has, in fact, made it to the prestigious shortlist.”

Best wishes, Manny, and see you next year!