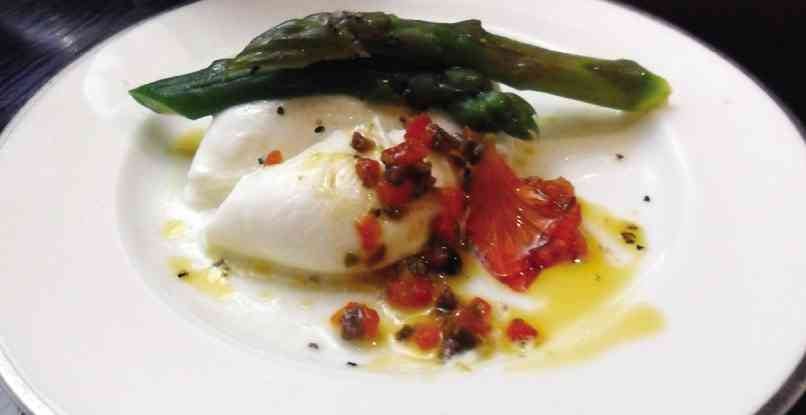 On my return trip to Manila from Singapore, I was asked to “book a cook.” There were nine chefs to choose from the International Culinary Panel of Singapore Airlines, each one with a prestigious reputation, operating highly regarded restaurants.

Not that they would be cooking in the plane’s galley; but I was asked to choose a dish to be served on board the flight.

I wanted something light, so I chose seared black cod fillet ála Niçoise. Asked to explain, I said I liked cod, salad Niçoise was a favorite, and the dish was designed by the only female chef in the panel, Suzanne Goin.

But gender is the least important consideration—Goin has five acclaimed restaurants in Los Angeles, was selected best chef by several organizations, and published cookbooks, with the first one, “Sunday Suppers at Lucques,” voted as best cookbook in 2006 by professionals.

She trained and worked under exceptional mentors such as Alice Waters at Chez Panisse in California, and chefs Didier Oudill, Alain Passard and Christian Pottier in France.

She was with seven other chefs in the International Culinary Panel (but without chef Alfred Portale of Gotham Bar and Grill in New York) presented at the World Gourmet Forum at Grand Hyatt, a rare event sponsored by Singapore Airlines in which new dishes and wines were introduced to the media.

Goin demonstrated the dish I ordered, telling her audience that someone among us chose the dish for the trip back home. I smiled as I tasted her sampling that went well with the Monkey Bay Sauvingnon Blanc.

Wine annotating was by the celebrated authority from the United Kingdom, Oz Clarke, author of several books on wines and host of a TV show on exploring vineyards.

Of Monkey Bay, he noted how the New Zealand family winery has produced one of the best known refreshing light wines in the world. I smelled again that guava aroma I had detected on my first sip years ago.

Clarke also presented the champagne to be served in Business Class, the Taittinger Prelude Grand Crus; one could sense the writer in him as he described the place where the Chardonnay grows as a “mountain of dreams” and the taste as “luminous… lemony.”

Two chefs have been with the International Culinary Panel since 1999, a year after Singapore Airlines set it up—George Blanc of France and Yoshito Murata of Japan.

Both are recognized as the best ambassadors of their country’s cuisine; they also have restaurants highly rated by the Michelin Guide and have authored outstanding cookbooks.

Both know the challenges of creating airline food—preserving the freshness even if the cooking is done way ahead, and seasoning correctly because the palate changes, with food tasting

For Blanc and Murata, sauces do the major work of flavoring and perking up the dish—the former’s Pan-fried Free Range Chicken Supreme, which uses the juice of chicken scented with saffron; and the latter’s Chargrilled Beef with soy sauce, with vegetables simmered with the mirin.

Carlo Cracco from Milan, Italy, was eager to share the merits of Italian cooking. Fresh ingredients are very important, simple, minimal cooking, too, he said.

His dish design was seared veal fillet with a crust of hazelnuts and veal flavoring it.

He cooked a mozzarella appetizer with asparagus spears and a dressing of chopped tomatoes, olive oil and balsamic vinegar.

Because I had to interview the other chefs, I thought I missed the tasting but a lone dish was there for the taking. Perfect first taste.

Three chefs represented Asia and quite predictably, their dishes came with rice.

Sam Leong of Singapore is familiar because he has done cooking demos in Manila thrice. He is known to innovate on Chinese recipes; his restaurant is called Forest. His dish was steamed chicken in Chinese herbs with light sauce, served with mushroom rice, beans and hon shimeji (mushrooms) in XO sauce.

Zhu Jun of China is the chef-proprietor of Jade Garden in Shanghai; his dish was Chinese style cod with black mushrooms and egg fried rice.

Sanjeev Kapoor of India is a TV cooking show host, cookbook author and has franchised his restaurants in India and the Middle East. He designed a lamb shank with tempered Bengal (yellow dal) served with yogurt vegetable pilaf.

As if those tasting sessions were not enough, Grand Hyatt had lunch prepared for guests that took the palate around the world in 10 courses and desserts from its Mezza9 buffet.

It was no wonder that all I wanted to do was sleep at the Silver Kris Lounge of Singapore Airlines, especially at the quiet but expansive Terminal 3. I had to remind myself I was leaving from Terminal 2.

Dinner arrived and the flight attendant said my “book the chef” order would be served. It was a big slice of cod with the touch of Nicoise in the haricots verts (green beans), potatoes and tomatoes. 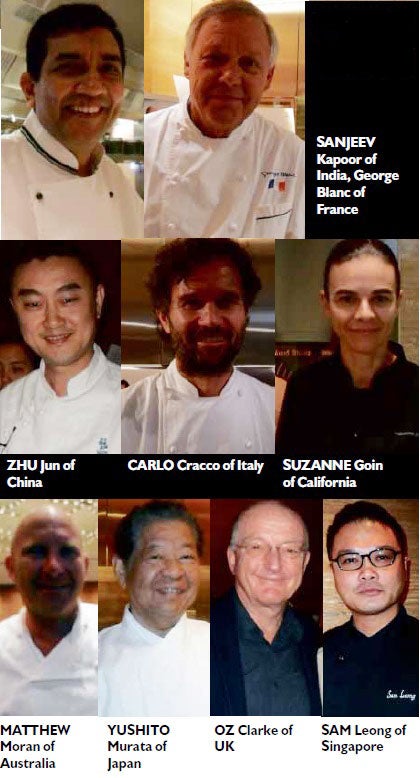