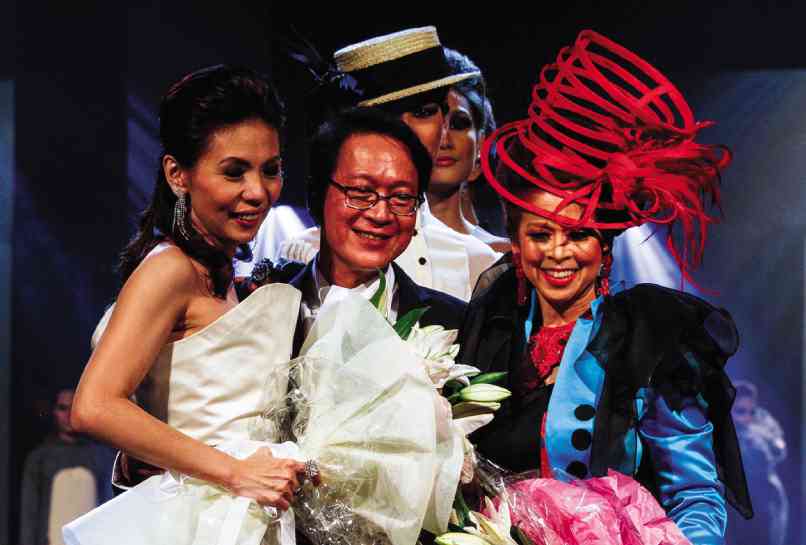 Lloren proves why he’s different from the pack

Guests who were aware of designer Jesus “Jojie” Lloren’s theme tried to guess the Filipino painters he was channeling in his 40-piece collection presented at the Red Cross Charity Gala last Saturday in Makati Shangri-La’s Rizal Ballroom.

But when it became evident that Lloren had made good on his promise not to show a series of line designs and literal interpretations of clothes inspired by paintings, not a few guests simply sat back and enjoyed the seasoned designer’s artistry and amazing range.

One of the few numbers that was obviously inspired by a painting was a brown and scarlet Thai silk dress with a cape and partially beaded skirt that mirrored a city skyline.

“That dress was my take on an Arturo Luz painting,” Lloren confirmed soon after the show.

Known for clean lines, impeccable tailoring and preference for neutral colors, the Paris-trained Lloren capitalized on his strengths while leaving his comfort zone to do soft, fluid and sometimes body-hugging dresses made of chiffon, tulle, lace and jersey.

He also overcame his seeming reluctance to use color and instead played up the most upbeat and unlikely hue combinations. His take on Charlie Co, for instance, inspired him to produce a three-piece suit in brown, purple and turquoise.

He did color blocking, layering and astute juxtaposition of contrasting proportions.

Lloren made his neutral numbers more interesting by giving them pops of color and texture in the form of straps, embroidery, patchwork and appliqué.

In his tribute to Pacita Abad, he seamlessly fused an embroidered and appliquéd panuelo and trumpet sleeves made of piña with Western silhouettes such as tailored jacket with coattails and palazzo pants.

He rendered the ancient Alibata script in beads to adorn a long faux leather dress with see-through panels. The look, he said, was inspired by Brenda Fajardo, one of the prime movers of protest art at the height of martial law in the ’70s.

“I’m so relieved it’s over,” said Lloren, who had stopped taking clients’ orders since June to focus on the show. “This show was a bit smaller than the one I did in 2003 after I returned from Paris. But in my nearly 25 years as a designer, this was the hardest show to pull off.”

Since no two looks were similar, it was like showing the most iconic and defining pieces culled from 40 different collections, he added.

His play on silhouettes—from loose, flouncy and draped to tailored, sculptural and fitted—wasn’t confined to individual pieces. He combined draped and tailored elements in some numbers.

“It would have been limiting had I confined myself to sculpture techniques,” he said. “If my inspiration was a fluid and colorful painting, my work should echo it.”

Many of his pieces were masculine-looking, including his opener, a Victorian-inspired cream top and pants with cummerbund echoing Luna’s “The Parisian Life.”

But he also had long dresses with tulle inserts and judicious cutouts that showed some skin as they celebrated the female anatomy.

His tribute to Nena Saguil, a long, body-hugging pink dress embellished with black circular patches on the bodice and neckline, was easily one of the most applauded numbers.

Another well-received number was Lloren’s take on a Lee Aguinaldo painting—a shapeless and sculptural blue dress with T-shaped red trims running from the neckline and collar down to the bodice and skirt.

To beef up his knowledge of Philippine art, Lloren did research, including visits to the National Museum.

He consulted friends such as academician Boots Herrera of the Cultural Center of the Philippines and art dealer Albert Avellana.

His 40th piece, a white number, had four layers of sleeveless silk columns with strategic cutouts that partly revealed color—brown and turquoise or black.

Lloren was supposed to make it his finale, but changed his mind at the last minute.

“It was the only piece not inspired by a painting,” he said. “It’s how I interpret my entire experience while doing this collection. It has plenty of holes because my eyes, in a way, were opened to so many possibilities.”

Now on its sixth year, the Red Cross fundraiser was reportedly able to generate over P4 million from ticket sales and auctions.

Proceeds will go to the Red Cross Makati and Taguig chapters, and the Assumption High School Batch 1981.

During a Red Charity Gala press conference almost two months ago, Lloren admitted feeling a bit daunted by the prospect of being compared with previous featured designers such as Furne One, Michael Cinco and Cary Santiago.

Known for their penchant for bling, these Filipino designers first became famous abroad catering to the Middle East royalty and elite.

Lloren need not have worried, as he was able to hold his own. His experience, sophisticated taste and unique aesthetics were very evident in the 40 disparate pieces he presented at the Gala.