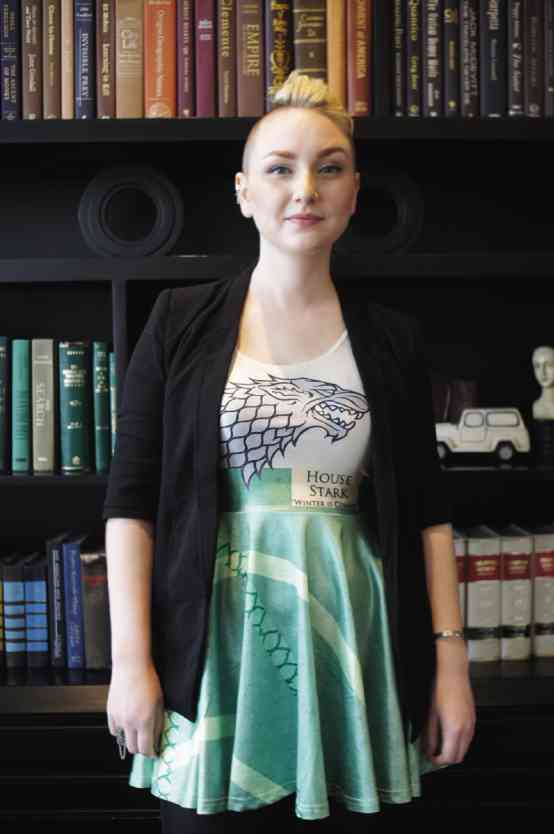 Of all the international authors that National Book Store has flown in, it’s Madeleine Roux whose works are so scary we couldn’t finish reading them.

Meeting the author, we told her we purposely put “Asylum” down for a while after realizing it was already late afternoon when we started. “That’s okay,” she said, laughing. “I get that a lot.”

Inquirer Super chats with Roux (this is her first international book tour), who recounted tasting halo-halo for the first time (served in a to-go cup from Sentro), dressing up for Halloween, why she can’t stand watching horror movies or reading horror novels, and her real-life encounter with a ghost.

We love your cool “Game of Thrones” dress.

I got it from Amazon. I have all the Houses.

Which one is your favorite House?

It’s a toss-up between Targaryen and Martell.

Tell us about eating halo-halo.

I’ve heard so much about it… It’s so good, I completely destroyed mine in minutes.

How did you get hooked up with National Book Store?

They got in touch last year with the people at Harper Collins. Then my publicist asked if I would be interested to go to the Philippines, and I was like, yeah. Obviously! I had no idea there was such a huge fan base in the Philippines or that YA was really exploding here. It was a total surprise and an honor.

The images in your book are very creepy. Where did they come from?

Harper Collins was interested in the found imagery trend and asked how I’d feel about incorporating that. So it was really a collaboration. I would look in whatever archives I could find to give Harper some ideas of what I was thinking of, what I thought matched with things, and then they would either take those or would go look themselves because they have access to archives I could never get into…

What has been the creepiest image so far?

There’s one at the back of “Sanctum” that just gives me the shivers every time I see it: this little boy in a clown costume and he’s swallowing a sword. It’s so spooky. It’s probably innocent, just a kid working at a carnival, but the way it looks, like his eyes are kind of rolling back. It’s gross. That or the chair in “Asylum,” that’s pretty gross, too.

Did you always want to write about scary stuff?

Not really. I kind of stumbled into it. I actually started writing a lot more fantasy, sci-fi, historical things, romances… I was writing a lot of historical stuff and got really tired of having to research everything that was happening, so, on a whim, kind of as a joke, I started a blog where I published chapters of someone surviving a zombie apocalypse.

It was dark humor and adventure, but there was obviously a horror element to it that just developed as it went on. That was actually the first book that got published (“Allison Hewitt is Trapped”). That got me noticed, so okay, I guess I’m doing this now.

I really enjoy it because I live a pretty safe, low-key life, there’s not a lot of danger, so I feel it’s an opportunity to tap into some of that darker stuff that I don’t actually have to deal with much. It’s almost like exploring a totally different side of yourself. I’m kind of a scaredy-cat, so I feel like I’m a good barometer for knowing when it’s too much. It’s weird; I don’t watch a lot of scary movies or read scary books, and if I do, they ruin me for days. Honestly, everyone’s like, “What’s your favorite horror movie or book?” and I’m like, “I’m kind of a baby, you probably won’t think they’re scary.”

What was the last scary movie that ruined you?

I avoid them. I really loved “Cabin in the Woods,” but that almost doesn’t count because it turns into a farce of horror movies.

I remember very vividly watching “The Ring,” and that screwed me up for a few days, like every time a phone rang or when you’d see a VHS tape, because we were still watching VHS tapes at that point.

Also this movie which was not billed horror—that’s why I saw it—I was like, “Oooh, it’s sci-fi.” It’s called “Sunshine,” and it turns into a horror movie. You think it’s just gonna be people in space who have to restart the sun, it’s cool. But no, it gets really scary and that’s like two of my biggest fears: scary stuff and outer space. I find the idea of being in outer space just terrifying, because if something goes wrong, what are you gonna do?

Now that you’ve admitted to being a scaredy-cat, where would you rather be trapped—in an asylum or in a bookshop about to be overrun by zombies?

I feel like so much of the fear of being in a haunted place is your own brain kind of messing with you, and every tiny noise is suddenly a ghost or something coming for you. With zombies coming after you, I feel like you actually might die… If I were to go down, I’d rather go down in a bookstore, because at least I could be surrounded by books (laughs). It’s a fitting place to have my last stand.

You mentioned turning to horror because doing research for historical fiction was getting too tedious. Does that mean you didn’t research how to kill zombies?

I did a little shooting; I needed to know how it would feel, but it’s not something I would want to do again. I grew up in the country, I was in the woods a lot, I know what it feels like to hit a ripe squash with a baseball bat. I’m assuming it’s a very similar feeling when you do that to a zombie’s head (laughs). I was kind of a tomboy growing up, so I chopped wood, built forts and stuff, that I can handle. But I did go shooting.

There’s probably more direct research in “Asylum” because I had to comb through archives and patient files, and delve into the history of mental health. Because so many of the images are real, you can’t escape it. It’s like you’re doing research just by looking at these images. But in the second book, “Sanctum,” somebody gets killed by lobotomy and I had to look at pictures of that, and that was not a good night. It was a very sleepless night. Because they’re real people, and, oh my God, how are there pictures of this? It’s some dark stuff, it takes you to a heavy place when you’re researching for a book like that.

You mentioned that a lot of people are unable to read your books at night.

I get a lot of people saying, “I started it before I went to bed, that was a bad idea.” You hope people are freaked out, that they have a strong reaction, because that’s the point—so much of writing a book like this is about balancing, making people afraid, but also balancing it so they want to keep going. Because if you pile it on too much, they’re just gonna stop and never pick it up again. So you want to have these cliffhangers or moments where they can pause and breathe. I enjoy it when people say they couldn’t sleep or it scared them.

In the spirit of Halloween, what’s the spookiest thing that’s happened to you?

I’ve seen a ghost. I still question it a lot, if it really happened. The house I grew up in was an old farmhouse built in 1899. Families have come and gone and lived there. I would notice as I got older that when I was in the upstairs hallway, I would feel like I was being watched—only at night and only in the hallway, which is weird, but you get used to it. I mean, what are you gonna do, move out of your parents’ house when you’re 4 years old?

A few years later, I had three American Girl dolls in their own little beds. I’m usually a good sleeper but one night, I suddenly woke up and there was a man standing in my room looking at the dolls, leaning over like he was inspecting them.

And it was weird, because as much as I was freaked out, because obviously there was a gray, slightly translucent man standing in my bedroom, what the f**k—but at the same time I was not afraid, in the sense that I knew I was not in danger.

It was like the shock was there, but he looked really sad, mournful, nostalgic almost. He never looked at me, and I had the presence of mind to close my eyes, pull the covers over my head and hope this goes away because I didn’t know what else to do.

I counted to 30 and then he was gone. Maybe I imagined that, maybe it was a dream, but I just remember vividly being awake—you can tell the difference between that or a creepy dream…

This Halloween, what are you planning to dress up as?

Halloween is my favorite holiday. I love to make costumes, but this year I’m gone for two weeks on tour, so I’m going to be smart—I’m going to pay someone to make it so when I get home from the Philippines, it’s just ready. I don’t have to stress out. It’s this character from “The Fifth Element,” the main character. She has orange hair, I’ve always wanted to do that. Last year I did that character from “Pacific Rim,” I was one of the Russian pilots because she had bleached blonde hair. I cosplay a little bit, off and on.