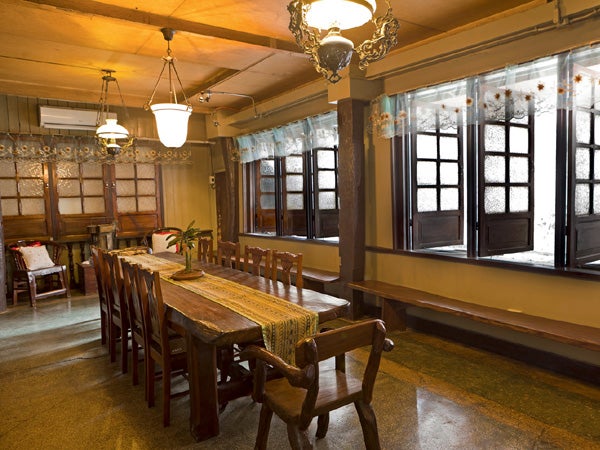 The dining room is recreated in traditional mode, even as times have greatly changed. Photo by Needs and Solutions

THE JESUITS have an early but short-lived association with the founding of the city of Cebu, an association that ended about 1600. But Jesuit presence in the province continued, notably in the town of Mandaue where a Jesuit hacienda operated for a good part of the 18th century.

The Jesuit presence was such that long after it was gone, memories of it persist, like a nagging thought. Case in point is the Jesuit House in modern-day Barangay Parian of Cebu City. The house sits on around 2,000 sq.m. of land, but is barely visible from the street. The high walls were built to protect it from theft as it still is a warehouse for the present owner’s business.

The Jesuit House is actually two houses connected by a bridge. The portion that faces the defunct main entrance on narrow Binakayan Street is a rare affair, as its coralline limestone walls rise two-stories high, similar to those in Vigan, Ilocos Sur. The house to the back—oriented towards Zulueta Street—the current ingress point, is more typical of Fil-Hispano colonial houses in that the ground floor is the one walled with stone while the upper story is of wood.

In prewar years a tower used to surmount the Jesuit House, lording high above the still existing clay-tile roof (a double row of tiles—each row with a tile atop the other—facing down and cupped by a single tile facing up in the kulob-hayang pattern) that echoed the color of the terracotta flooring of the zaguan, the ground-level interior space.

Everything about the house is generous, almost grand, from the three-meter-high ceilings to the big door and window openings. It is also a house made to last generations, typical of its time—thick walls and all.

The innate importance of the Jesuit House is immediately apparent to most visitors, even given the clutter of warehouse items. However, its history remains murky, even contentious.

The accepted narrative is that this house, after having been built and occupied by the Jesuits, finally came into the possession, in 1910, of the Alvarez family (originally from Asturias, Spain) that settled in Cebu via Lawis, Leyte.

Who Don Luis brought it from is still mystery, but it is surmised—based on a lead provided by his granddaughter, Edwina Link-Harris—that it may have been from a Spaniard, Don Cristobal Garcia, a Tabacalera agent of the then municipality of Cebu.

In the 1960s, the house was leased to an Alvarez kinsman, Peping “Jap” Rodriguez, for use as a club. Within the decade it again changed hands—going to the Sy family this time.

Jimmy Sy, who inherited the property from his father, is married to the former Margie Vaño of the Old Guard, related to the Sanson-Velosos, the Coromina-Fortiches, and the Escaños. The union prompted memoirist Concepcion G. Briones, in her book, Life in Old Parian, to note happily that the house has come full circle; back it is somehow to Old Parian hands.

The earliest record, unearthed by Michael Cullinane, an American historian on the Philippines, on the house reveals that it once belonged to the pious Villa family of the Chinese mestizo principalia or local aristocracy. The Villas gave the house to the Jesuits around 1880 on certain conditions, including one on the dedication of specific prayers for living and dead members of the family.

The Jesuits, credited to have introduced masonry construction to the Philippines, proceeded to convert the Villa donation from the original mamposteria affair to the solidity of stone, tile, and hardwood it still is today.

However, the deed has been questioned by Sy and his group. Their contention is that the house was already “Jesuit” even before 1880 as attested by the house’s Jesuit seals and the legend “1730” found in its interior. In this, they have found formidable support in the person of Fr. Rene Javellana, SJ, a Jesuit art historian based at the Ateneo de Manila, who believes that the “Jesuit seals carved in two separate places on the… house is definitely in the 18th-century style, coupled with the date of 1730 (that) is definitely in 18th-century calligraphy.”

The 1880 deed is seen as critical in that the Jesuits were expelled from the Philippines in the late 1760s not to return (to Manila) until 1859. It was also long believed that a Jesuit presence in Cebu was not reestablished until the erection of Our Lady Queen of China, Sacred Heart Parish—in 1952, a belief the deed now debunks.

Cullinane contends that before 1880 the Jesuits were practically out of Cebu, maintaining only a house and college in the city’s Spanish quarters. Of the Jesuit House, Cullinane adds:  “We can still argue (if we wish) that the casa itself dates back to 1730 (which I also doubt, but would love to be proven wrong about).”

But it is clearly this association with the religious order that gave the house its popular name—“The Jesuit House”; the Alvarezes referred to their home simply as “Zulueta,” a place of childhood memories and of a city that felt like a small town.

As it is, the “Zulueta” house of its best remembered occupants, the Alvarezes, is a must-see, if only to give one an idea of how massive the mansions of the truly wealthy were.