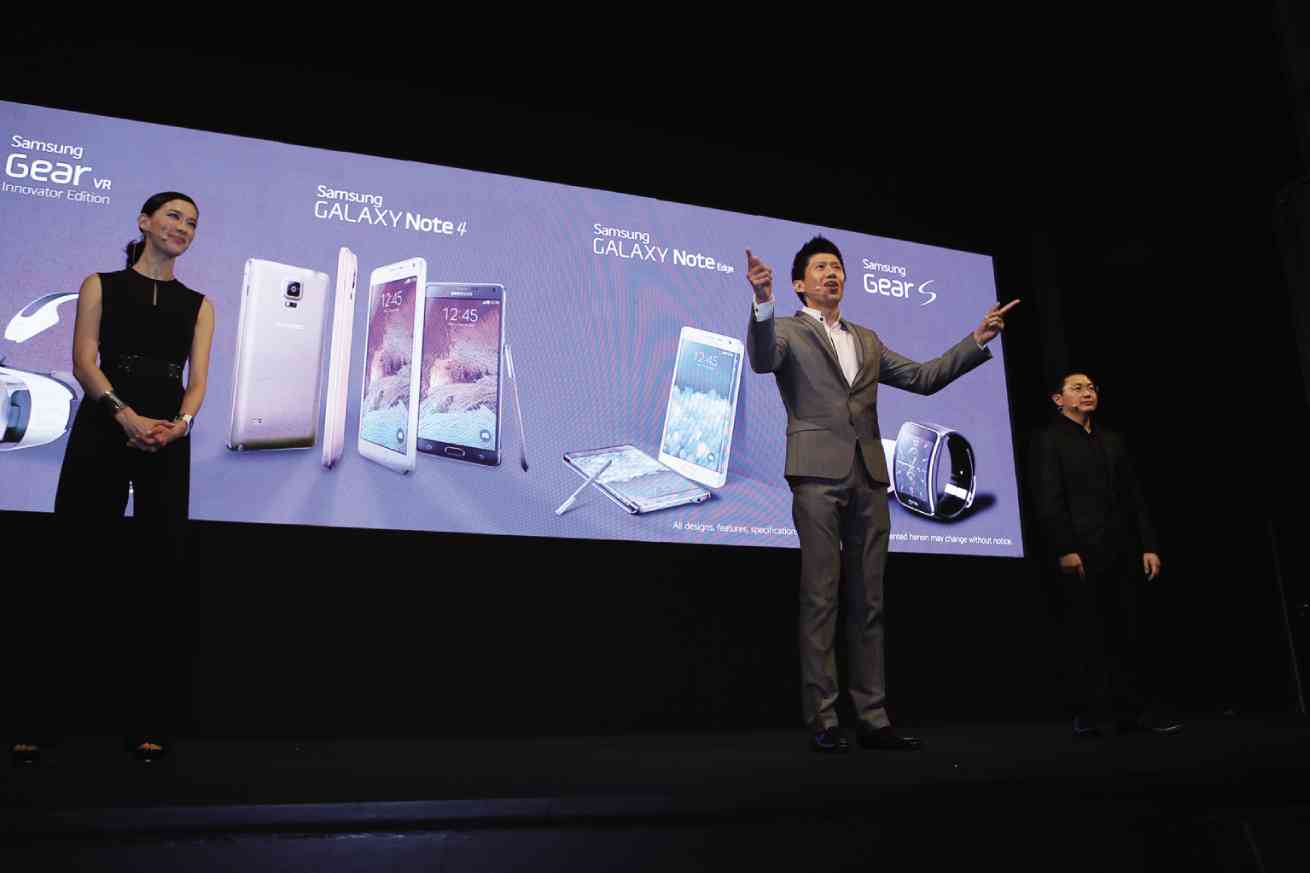 The tide has turned to the other side of the smartphone wars. Until recently, smaller and thinner handsets were prized by technophiles. Now, however, bigger is once again better.

Earlier this month, Samsung Electronics Co. Ltd. launched the Galaxy Note 4 at the Victoria Theatre and Concert Hall in Singapore.

Also introduced at the event were the Samsung Galaxy Note Edge and the Samsung Gear S. Described as the next generation smart wearable device that expands the smartphone experience, the Gear S looks like a curved wristwatch that does more than tell time.

Aside from keeping tabs on missed messages, it can measure the number of steps one makes daily; it can receive and send text messages and make or take calls.

Those who prefer more bling can check out the crystallized cuffs made with Swarovski elements sold separately.

The Note 4 and Samsung Gear S will be sold locally beginning today, Oct. 25.

At the regional launch, Samsung officials repeatedly said that their phones have always had large screens.

“We created the category,” said Harry Lee, managing director of Samsung Electronics at Samsung Asia Pte. Ltd. “The Note 4 has three key attributes; aside from its sizeable screen, it allows for multitasking with the S Pen, a proprietary device.”

JK Shin, CEO and head of IT and mobile communications at Samsung Electronics, said in a statement: “The Galaxy Note series signaled extraordinary innovation within the technology industry. Its larger screen size and iconic S Pen technology launched a new standard in smartphone culture.

“With the introduction of the Galaxy Note series, we brought the age-old culture of the pen and notepad into the digital world. The new Note 4 introduces the most refined Note experience by combining all the latest technology that users expect from the Galaxy series.”

The Note 4 has a 5.7-inch Quad HD (2560×1440) Super AMOLED display that reproduces more vivid images with deep contrast, better viewing angles and response times as fast as a millionth of a second.

Due to its large screen, the refined Multi Window feature maximizes the user’s experience for easier multitasking.

Users can choose how they access their applications with full, split or pop-up screens; they can also easily change the size and positioning of apps on the screen with one intuitive swipe.

The new S Pen has a more natural brush effect that simulates writing on paper with a fountain or calligraphy pen.

Other features include Air Command, Action Memo, Screen Write, Image Clip and Smart Select that allows users to create and collect content with ease. The Note 4 will be available in Charcoal Black, Frost White, Bronze Gold and Blossom Pink.