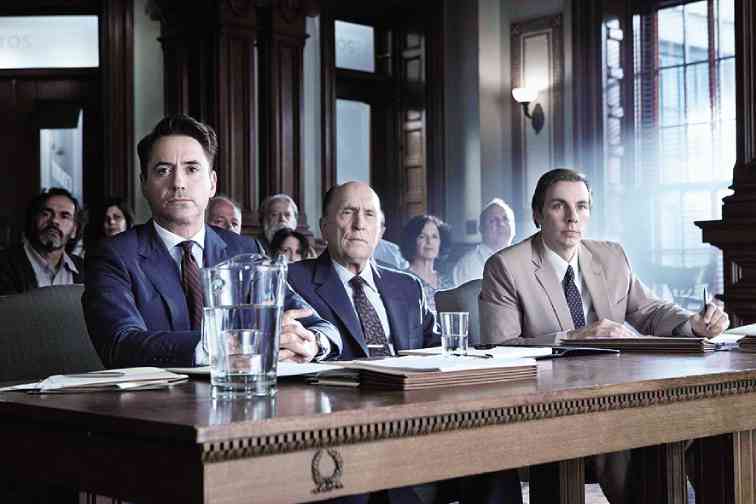 The death of his mother draws big shot city lawyer Hank Palmer (Robert Downey Jr.) back to his childhood hometown he had for the longest time eschewed. But a much bigger event welcomes him home when he is called in to defend his estranged father (Robert Duvall) who has been accused of murder.

This is the premise of the courtroom drama “The Judge,” directed by David Dobkin and written by Nick Schenk and Bill Dubuque.

But the film is more than a courtroom drama, Dubuque was quick to say.

“I knew they wanted a Midwestern sensibility, and they felt that would be right up my alley,” Dubuque said. “It also called for a very dialogue-heavy verbal combat… It is set largely in a courtroom, but it’s not a courtroom drama—it’s a family drama—so it was important to know where these people are coming from.”

In the movie, Palmer is set to pluck his latest white-collar client from the State of Illinois’ prosecutorial clutches when he receives a message that his mother has just passed away. Hank has no contact with his dad, and his mom is the one person in his family—in his entire hometown of Carlinville, Indiana—with whom he had remained in touch for the past 20 or so years.

But before he could return to the city, Hank is called back to defend his own estranged father, the town’s venerable judge of 42 years, who suddenly finds himself on the wrong side of the bench.

“No matter how old we are, within five minutes of walking back into our childhood home, we are exactly who we were when we left there,” said Dobkin, who also produced the film. “We fall back into those routines; we’re subject to the same behavior and communication patterns of our youth, the same unspoken misunderstandings and unresolved issues, however great or small, which wind up driving us for the rest of our lives.”

Pairing acting heavyweights Downey and Duvall for the first time, the film seeks to explore the role reversal we all face, whether through emotion or circumstance, of having to parent our aging parents and come to terms with our own personal history.

Downey, also the executive producer, said that “The Judge” seems to him a 21st-century version of what he considered classic filmmaking. “What I love about this story is the incredible sense of place, of going away from home and having to return to face all the things this guy had been avoiding for years, which all come flooding back at once,” he said. “How failures and successes in life can be perceived so differently by people who are so alike, even if they can’t see it or admit it. And it’s told with a lot of twists and surprises and humor.”

The primary relationship Dobkin wanted to explore was one between a strong patriarchal father and the son who had left home years ago and who, due to an ongoing, seemingly irreparable rift between them, had never returned to face all the skeletons in his boyhood closet.

The story first occurred to Dobkin when, after experiencing a personal loss, he began to think about how adult children relate to their elderly parents in US culture.

“In many parts of the world, multiple generations live in the same house their entire lives. It’s totally natural,” he said. “But for the most part, we Americans don’t live with our parents, so in a way we’re anesthetized from their aging, both physically and emotionally. I started envisioning these three brothers and their father, coming together after the mom passes away, and what that would be like.”

The film is now shown in theaters nationwide.