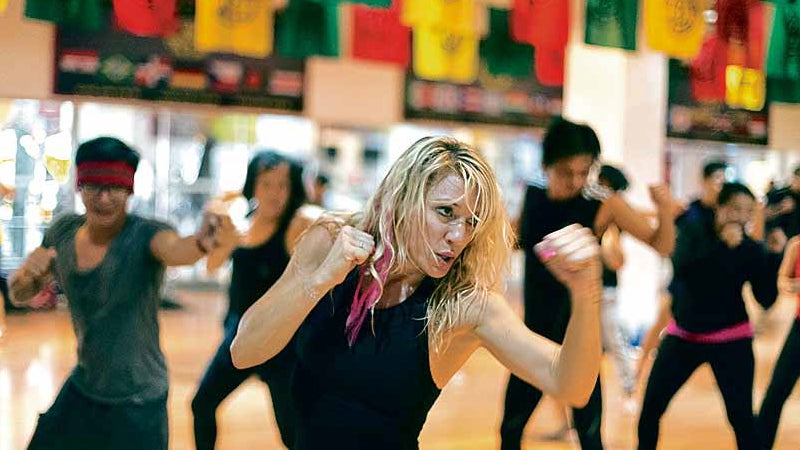 Now anyone can jab like a lady, punch like a man, and burn tons of calories along the way. Piloxing, the workout that has taken Hollywood by storm and empowered women the world over, is finally going mainstream in the Philippines.

An ingenious union of opposing disciplines, boxing and Pilates, Piloxing will be offered at Gold’s Gym branches next month.

Characterized by bursts of high-intensity cardio (boxing) and low-intensity exercise (standing Pilates), with fun breaks of some dance in between, the interval workout is touted as the next big thing after Zumba.

This interval training will burn calories more efficiently—between 400 and 900 calories in one-hour session—depending on age, fitness level, intensity and weight.

In the country last week, upon the invitation of Gold’s Gym, was one of Piloxing’s three co-owners, Cortney Gornall, who is also the president of education at the Piloxing Academy in Los Angeles, California.

Gornall was in Manila to train the Gold’s Gym staff and to groom a master trainer.

The Gold’s Gym-sponsored Piloxing training camp was open to all fitness instructors, regardless of affiliation. Soon Piloxing will be offered in more studios in the country.

“The movement in Piloxing is about engaging the core, the muscles in the center of your body, from knees to shoulders, and engaging them equally at the same time so that you maintain your spine in the alignment that you were born with,” Gornall said.

He added that there’s a particular way the spine is shaped so that there’s equal pressure on the discs in your back. When all the muscles are engaged equally, it can keep you from collapsing and pinching down on the disc, and you won’t wear and tear the discs, bones and nerves.

“Once you maintain that, you protect your body, and you gain power behind your punch because that is your center—you are better balanced, powerful and aligned,” she said.

Core strength and spine alignment are based on Pilates principles. Both help prevent injuries.

That Piloxing steers clear of routines that could cause injury is not surprising. Its founder, Viveca Jensen from Sweden, was a dancer whose career ended prematurely after she tore a knee ligament.

Jensen, said Gornall, not only lost a career, but soon after became a single mom as well. It was precisely this situation that drove Jensen to find an outlet to empower women.

Gornall said Jensen wanted to combine two of her favorite workouts, boxing and Pilates. After seven years of trial and error, Jensen was finally able to launch Piloxing. Gornall was her first student.

“Jensen felt that women have this side to themselves where they are in charge, powerful and in command, but there’s also the other side where they want to be the mother, the girlfriend, the friend, or the daughter. Women also want to stay with that side of themselves. So Piloxing is like a marriage of all that,” Gornall said.

The Piloxing mantra, “sleek, sexy, powerful,” chanted out loud after each session (with matching actions to boot), is designed to make women feel empowered and confident.

“Sleek” is the Pilates part, where the body gets toned; “sexy” is the dance part that’s not raunchy sexy, said Gornall, but one that makes you feel graceful and pretty; and “powerful” is the boxing element, when women learn to throw punches like a man.

And this apparently works, even for first-time Piloxing students. Fitness enthusiast and a very pregnant Madelle Enriquez joined Gornall’s class, and became an instant fan.

“There’s nothing like it. It’s so different from Zumba because it’s going to push you more. I’m suddenly using muscles I haven’t used in a while. And they’re beginning to ache,” Enriquez said, laughing.

Enriquez is preparing to be the country’s Piloxing master trainer. To avoid physical exhaustion, she modified some of the movements in Piloxing. And there’s the beauty of the workout—students can modify it according to their own level. Gornall said students can opt, for example, not to lift the leg as high, or punch a little less.

“It’s intimidating for many people to start working out, but Piloxing isn’t intimidating at all. It’s all about encouraging each other. We make the students interact with each other; we make a ‘woohoo!’ sound. People who start out at the back corner migrate to the front over time,” Gornall said.

Farah Roxas, a fitness buff who joined Gornall’s training camp, was among the few non-trainers in class.

“I got so attracted to it because while it’s very feminine, it really works you out. Boxing, which I’ve done, is so manly. I like the balance here,” she said.

Piloxing encourages barefoot training because the foot is the foundation of the body, Gornall said. If you have a strong foundation, everything will be more aligned and strong.

“If your foot is weak or slightly misaligned, maybe your arch is slightly dropping down. That’s going to pull your foot out of alignment, which in turn will pull your ankle out of alignment. Then your knees, hip, spine and neck have to adjust, and the next thing you know you have a hip pain because your arch was dropping,” Gornall said.

Piloxing is a low- to minimal-impact workout; there’s no jumping, for example, and so choosing to go barefoot is safe.

“Piloxing is excellent for lifting the glutes, giving it a nice shape, and toning the body with lengthened muscles. It is very safe for people with injuries because we are very strict with technique,” Gornall said.