For these 400 women, cutting one’s tresses can be ‘empowering and liberating’ | Lifestyle.INQ ❮ ❯ 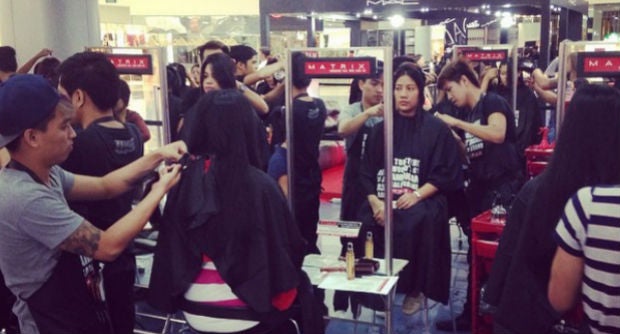 For these 400 women, cutting one’s tresses can be ‘empowering and liberating’

MANILA, Philippines–Every woman considers her tresses a crowning glory. Indeed, it takes a lot of courage to have them cut.

But for Rachel Ramos and Alexa Capina, it was “empowering and liberating” especially since it was for a good cause.

Rachel and Alexa were among the more than 400 women who trooped to SM North Edsa in Quezon City on Oct. 25 for the Matrix 8-Inch Cut for Cancer.

Matrix pooled in 30 hairstylists from David’s Salon to cut eight inches from the hairs of the women who accepted the challenge. The hairs will be used to make a wig for cancer patients.

“It’s feels liberating because it’s the first time that I have gone this short. But this is just hair. It can grow and it’s for a good cause so it’s okay,” Ramos said.

She said there would always be “fear” when cutting a girl’s hair especially if it’s long because it is considered their “security blanket.”

But for Capina, it has boosted her confidence.

“It was really empowering and it feels good to donate,” she said.

She said it was sad to know how cancer patients lost their confidence while struggling with the disease.

“What’s nice about this event is that it makes girls more aware of their beauty and what beauty can contribute to them. Because of what we do, we can contribute and empower these cancer patients,” she said.

Ramos said that even if you don’t donate money, other little ways can help.

“It felt good. I really feel good about it. Your hair can go a long way through the wigs that can be donated to the cancer patients,” she said.

The American Salon brand Matrix brought to the Philippines for the first time its worldwide program the “Chairs of Change.”

To mark the first Chairs of Change project in the country this year, Matrix introduced the 8-Inch Cut for Cancer Challenge.

“The idea of bringing Chairs of Change in the Philippines is there is a global initiative and we want to give back to the community and make a difference here in the Philippines,” said JP Thomassin, professional products division general manager of L’Oreal Philippines

Thomassin said Matrix has started the global initiative, Matrix Chairs of Change, believing that stylists can create change every day.

“Matrix has always believed that the role of a hairdresser is to make a change in the lives of people,” he said.

He said eight inches of hairs are needed to make a wig, which would be donated to cancer patients.

“If you can make people look better and feel better about themselves, that’s one way of giving back,” he said.

“Every action counts and every little step we take makes a difference,” he added.

TV actress Maxene Magalona was tapped by Matrix to be one of their ambassadors for the project.

Magalona is the daughter of rapper and actor Francis Magalona who succumbed to cancer in March 2009.

The actress also took the challenge and cut 10 inches of her hair to support the advocacy.

She said she was “more than thrilled” when she was given the chance to do the challenge.

Matrix has partnered with Kythe Ateneo for the program.

Even back in college, I have volunteered for activities by Kythe Ateneo because I believe in their cause uplifting the spirits of cancer patients,” she said.

Thomassin said Filipino women still have the chance to have their haircut at 30 selected Davis Salon’s nationwide until Dec. 31, 2014.

For details on Chairs of Change and the Matrix 8-Inch Cut for Cancer Challenge, log on to matrixchairsofchangeph.com.