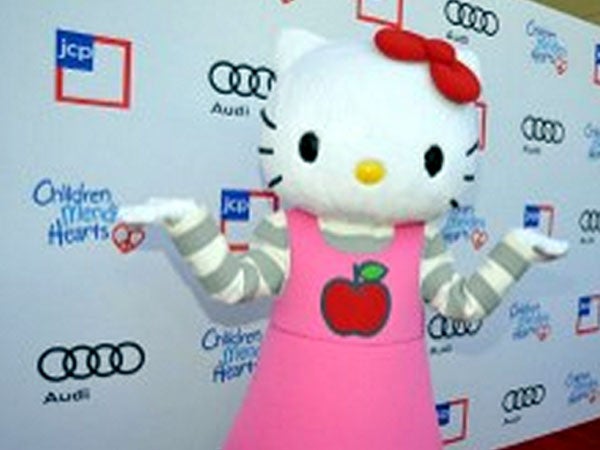 Hello Kitty at 40, giving adults a ‘licence to play’

TOKYO — As a Japanese schoolgirl in the 1970s, Kazumi Kaminaga had never seen something as cute as Hello Kitty when she first laid eyes on the moon-faced, mouthless character in a shop.

“There were hardly any ‘kawaii’ products when I was in elementary school,” said the now 51-year-old mother, using the Japanese word for cute.

“It was such a shock…She was really ‘kawaii’.”

With Kitty set to celebrate her 40th birthday on Saturday, Kaminaga has become a life-long collector of a brand phenomenon that appears on more than 50,000 products — including a dress made for pop diva Lady Gaga — and spawned an estimated multi-billion dollar industry.

The character is licensed to appear on everything from sundries and clothing to electronics and aircraft — sex toys are a myth — in 130 countries and territories.

First released in 1974 and appearing on a coin purse the following year, Kitty is far from just kids stuff these days. Its creator Sanrio says Kittymania is actually driven by adults like Kaminaga, who spoke to AFP as she shopped for a birthday card for her boss — a man.

“There was a trend born in Japan and other Asian countries in the 1990s that it wasn’t childish for adults to have products with these characters’ images,” said Sanrio spokesman Kazuo Tohmatsu.

“It was a major change in values and it also happened in America and Europe in the 2000s.”

Kitty’s enduring legacy is her appeal to all ages, but particularly grown ups, despite her child-like pink bow and a registered height of five apples.

“Hello Kitty gives adults some licence to play, to express a part of themselves that other parts of their lives may not allow,” Christine Yano, a US-based anthropologist specializing in the character told AFP in an e-mail.

Over the years, Kitty has shaken up her look with tinges of punk, while linking with fashionable brands has helped keep up the appeal with some “edginess”, Yano added.

Kitty was also a product of her time, appearing three decades after Japan’s bitter defeat in World War II when the previously devastated country was firmly back on its feet and children had pocket money to spend.

Kitty got a boyfriend, Dear Daniel, when Japanese teen celebrities started openly dating, and a Persian cat named Charmmy Kitty when pets became all the rage among Japanese women.

Despite her years, the timeless character, who insists “you can never have too many friends”, is still exploring new frontiers.

Kitty went on a space mission this year aboard a satellite and Sanrio is launching a line of Kitty products for men next year, possibly before Valentine’s Day.

“That’s a good idea — I must buy them” for my husband and son, said Niroko Hoshino, a 56-year-old office worker whose fingernails are adorned with tiny Kitty faces, although she only became a collector as an adult.

“I have all sorts of Kitty goods — products for the kitchen and washroom, underwear, handbags… I can’t even say how many I have.”

But just like some real adults, Kitty has suffered something of an identity crisis recently following word that she is actually not a cat, but a girl.

The shock revelation in August went viral on the Internet and shocked many Kitty fans who thought she must surely be feline.

The surprise came to light when Yano asked Sanrio to fact-check captions for an October Los Angeles exhibition that she is curating to mark the character’s 40th anniversary.

But Sanrio insists it has been saying all along that she was a cheerful little girl born in a London suburb — despite her whiskers and pointy ears.

“Kitty was making telephone calls and had a goldfish friend from the very beginning,” Sanrio’s Tohmatsu said.

“It is a 100-percent personified character…Barring her cat face, she does exactly what humans do,” he added.

Either way, the girl-cat confusion appears unlikely to dent a seemingly bullet-proof brand.

To mark her 40th year, toymaker Bandai is releasing yet another licensed Kitty product: so-called “smartpants” that slip on the bottom of a smartphone for those who think that their device needs underwear.

And what is the mobile phone garment called? Hello Pantty, of course.

Hello! Hello Kitty not a cat, she’s a Brit