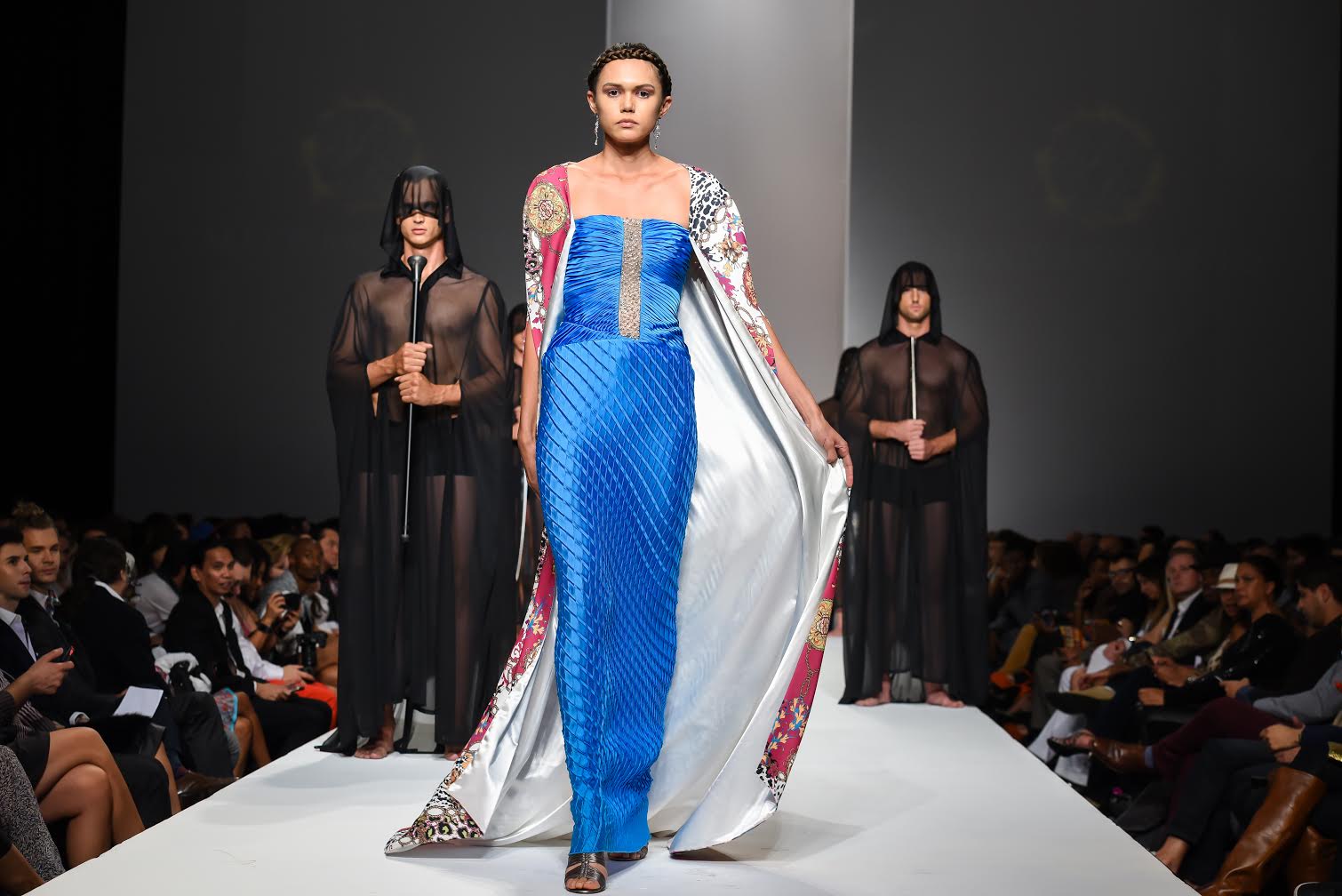 The 8th season of Style Fashion Week, now deemed the Official LA Fashion Week by City Hall, was held on October 15 to 19. “It is the largest, most influential fashion event of the season,” according to Style Fashion week’s website.

“We just completed another successful season showcasing an incredible lineup of International Designers, over 25,000 guests and 327 million media impressions so far! We look forward to seeing you again!” said Fashion Week sponsor and publicist for Bubble Fish Media, Michael Hendricks in a press statement.

Monsanto surprised the audience with not only a runway show, but also a production that included 3D special effects, music, costume along with fashion designs. This year Monsanto had a “Game of Thrones” inspired theme.

His scope of creativity kept the fashion who’s who and Hollywood A-listers like Lenny Kravtiz glued to their seats.

Inquirer.Net interviewed Alexis Monsanto after he received a standing ovation for his production.

“I have a team of sample makers and interns. I like to take out my time and mentor students from Fashion schools in Southern California. It’s a nice feeling! I got to showcase my craft to Hollywood A-listers,” Monsanto said.

“My design concept was finalized in July and then I stopped production while I juggling clients and weddings during the summer,” he explained. “We started producing the pieces by

mid-September after getting back from New York Fashion Week. So it literally took us about five to six weeks (to prepare).

The designer hails the Southern part of the Philippines, in Jimenez, Misamis Occidental. He went to schools in Dumaguete, Manila and Cebu. After college in Cebu City, he had the chance to work as a design assistant at the fashion houses of Leonardo Igloria and Phillip Rodriguez before moving to pursue higher education in fashion here in Los Angeles.

He looks up to the designs of Elie Saab “for its luxury, Valentino for its femininity and Versace for its sexiness.”

But celebrities and other designers look up to him as well.

“His style is amazing, he has a good taste, and his gowns are unforgettable,” said Lika Osipova, founder and producer of “Miss Russian LA Beauty.”

“I remember when I wore his dress at Emmys, before the red carpet I was at the ballroom with all the celebrities and nominees, they stopped me to ask who dressed me for this event, I was so honored to be in Monsanto’s creation,” added Osipova, who has worn Monsanto pieces for the Hollywood New Year Glamour Party, 2014 Emmy’s and 2014 Oscars. “Alexis has a super nice personality. He takes out time to help his clients with not only the dresses but advises the accessories and shoes for each piece.”

“He listens because he cares. He is prompt and even late nights he calls you to make sure he gets to you what you want for his creation,” explained Monsanto client Maria Wicker of Texas. He is the go-to designer of Wicker’s relatives and friends.

“He made me do things which I thought I could never do. I learned new techniques that are used in a process of making a garment. I think for me this is going to lead me to become the next fashion designer of Los Angeles!” said Saima Hasan, who has been interning with Monsanto since June.

“His designs are contemporary yet very classy.  He adds a very feminine look to all of his collections. His designs are wearable are not made only for the ramp,” added Hasan.

Not an easy industry

“This is not an easy industry. You need to have perseverance in the design world. Know the exact market you want to be in and focus on your designs,” Monsanto advised, with future designers in mind.

“You have to be conservative in the numbers when you create and cost the merchandise. You need to learn how balance your craft as an artist and a businessperson to succeed in this industry,” he added.

His involvement with the LGBT community takes up some of his time. He helps raise funds for Aids Project Los Angeles and he’s in the Planning Committee for the GLAAD Media

Awards (Gay & Lesbian Alliance Againts Defamation), which monitors the police and media in their handling of gay issues and depictions of fictional gay characters.

“I also help the Trevor Project December fundraising event annually, which is an American non-profit organization founded in 1998 and the leading national organization focused on suicide prevention efforts among lesbian, gay, bisexual, transgender and questioning youth.”

To top it off, he’s also active in Fil-Am events like Binibining Pilipinas-USA and its charity work and projects of the Apl.de.Ap Foundation.