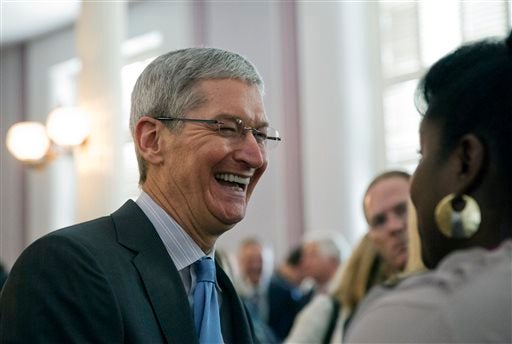 FILE - Apple chief executive and Alabama native Tim Cook laughs with a group before an Alabama Academy of Honor ceremony at the state Capitol in this Oct. 27, 2014 file photo taken in Montgomery, Ala. In an essay written for Bloomberg Businessweek, and published Thursday Oct. 30, 2014 Cook says that while he never denied his sexuality, he never publicly acknowledged it, either. (AP Photo/Brynn Anderson, File)

The public declaration, in an essay written for Bloomberg Businessweek, makes Cook the highest-profile business CEO to come out as gay.

Cook said that while he never denied his sexuality, he never publicly acknowledged it, either. The executive said that for years he’s been open with many people about his sexual orientation and that plenty of his Apple colleagues know he is gay.

Cook wrote in the column, published Thursday, that it wasn’t an easy choice to publicly disclose that he is gay, but that he felt the acknowledgement could help others.

“I’ve come to realize that my desire for personal privacy has been holding me back from doing something more important,” he wrote.

Three days ago, Cook challenged his home state of Alabama to better ensure the rights of the lesbian, gay, bisexual and transgender community.

Alabama is among the states that do not recognize same-sex marriage, and it also doesn’t offer legal protections on the basis of sexual orientation or gender identity. Cook is a native of Robertsdale, Alabama, and attended Auburn University.

“This really sets the stage for ‘It’s OK,'” he said. “Anything CEOs do is very magnified, very complicated, and it affects a lot of people. … There’s no taking away that he has become a role model and will have a positive influence on lots of people that would like to be comfortable being out in the world of business.”

“I consider being gay among the greatest gifts God has given me,” Cook wrote in the essay Thursday.

The executive said that “being gay has given me a deeper understanding of what it means to be in the minority and provided a window into the challenges that people in other minority groups deal with every day.”

Cook said he’s been lucky to work for a company that “loves creativity and innovation and knows it can only flourish when you embrace people’s differences.”

Apple Inc. has been an outspoken champion for diversity since Cook succeeded Jobs as CEO. The company has trumpeted the phrase, “Inclusion inspires innovation,” as a rallying cry. Cook has reinforced that message on his Twitter account with periodic posts supporting gay rights in the workplace.

Cook’s public declaration that he is gay comes a little more than two months after Robert Hanson — the former CEO of American Eagle Outfitters Inc. — wrote a piece for Time in which he talked about being an openly gay man for as long as he’s been in business and running companies.