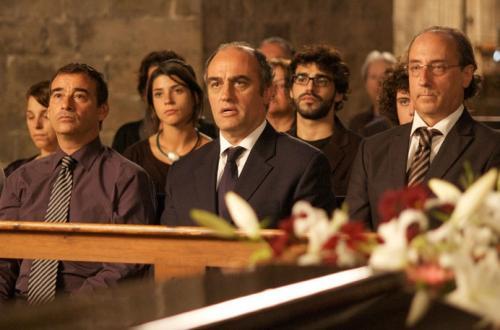 ‘Familia,’ a film cycle on family matters at Instituto Cervantes

MANILA, Philippines—Instituto Cervantes, in cooperation with the Embassy of Spain and the Film Archives of the Spanish Agency for International Development Cooperation (Aecid), presents the film cycle “Familia”, a series of Spanish films to be shown during the Saturdays of November at the Instituto Cervantes theatre.

Since its beginnings, Spanish cinema showed a knack for “family” as subject matter. This film cycle presents several approaches of the Spanish film industry to this institution.

The cycle will kick off on the 8th of November, at 2 pm, with one of the masterpieces of contemporary Spanish cinema –the surrealistic comedy “Familia,” directed by Fernando León de Aranoa in 1996.

It relates the story of a lonely man who organizes a surprise birthday party in his honor with professional actors featuring the members of his own family.

Along with that original masterpiece, the line-up of “Familia” features three films tackling some of the issues of contemporary Spanish society, such as family values, love or marriage.

The well-acted and poignant drama “Solas” (Benito Zambrano, 1999) will be shown on Saturday, November 15, at 2pm.

“Solas” tells the story of María (Ana Fernández) and her mother Rosa (María Galiana). María is one of the four adult children, all of whom moved as far as they could from their parents and the farm where they grew up.

María’s father, a violent, cruel, abusive man, has fallen ill and been brought to a hospital in Seville, where María lives. Rosa has been staying at the hospital with him, but the doctor tells her to leave before she falls ill herself. María takes Rosa to stay with her in the rundown suburban apartment where she lives.

María Galiana’s monumental performance rewarded her several prizes, as Benito Zambrano’s fine directing won him a Goya Award as the Best New Director and Best Screenplay. All in all, Solas received more than 50 international awards and nominations –among them, the Audience Award in the Berlinale Film Festival in 1999 and the Prize to the Best European Film at the Brussels International Film Festival in 2000.

“Un novio para Yasmina,” a film directed by Irene Cardona in 2008, is a romantic comedy about the imbroglio that arises when emotional dilemmas, star-crossed relationships and the unpredictable effects of love bring havoc to a group of friends.

Lola, whose marriage is on the rocks, speculates that her husband Jorge has fallen for Yasmina, a Moroccan immigrant who is in need of a visa to stay in Spain. On the other hand,

Yasmina is in a rush to marry a policeman, Javier, but he is proving to be frustratingly slow at fixing a date.

Meanwhile, Alfredo would be happy to marry… for love or for money. The outcome? Find out in this funny and engaging comedy that deserved the Audience Award in the 2008 Malaga Film Festival. The movie will be shown at Instituto Cervantes’ Salón de Actos on the 22th of November at 2pm.

The movie focuses on Lea, who is compelled to return unexpectedly to Girona as her grandfather has recently passed away. There, she will meet up with her family, whom she hasn’t seen since she left to go abroad. The death of the patriarch of the family is the catalyst to force his descendants to get along.

The three days of the wake, the mass and the funeral are full of nostalgia and grief brought about by death. But it is also the moment to draw a curtain to the show of appearances made by this bourgeoisie in their decline. Lea rebels against this world of hypocrisy, although it clings to her skin like a tailor-made suit.

All films will be shown in their original version in Spanish with English subtitles. The screenings will take place at the Salón de Actos of Instituto Cervantes, 855 T.M. Kalaw, Ermita, Manila. Time: 2pm.

Entrance is free admission on a first-come, first-served basis.