‘Paglaom’: How theater has become an instrument of healing and remembering in post-‘Yolanda’ Visayas | Lifestyle.INQ ❮ ❯ 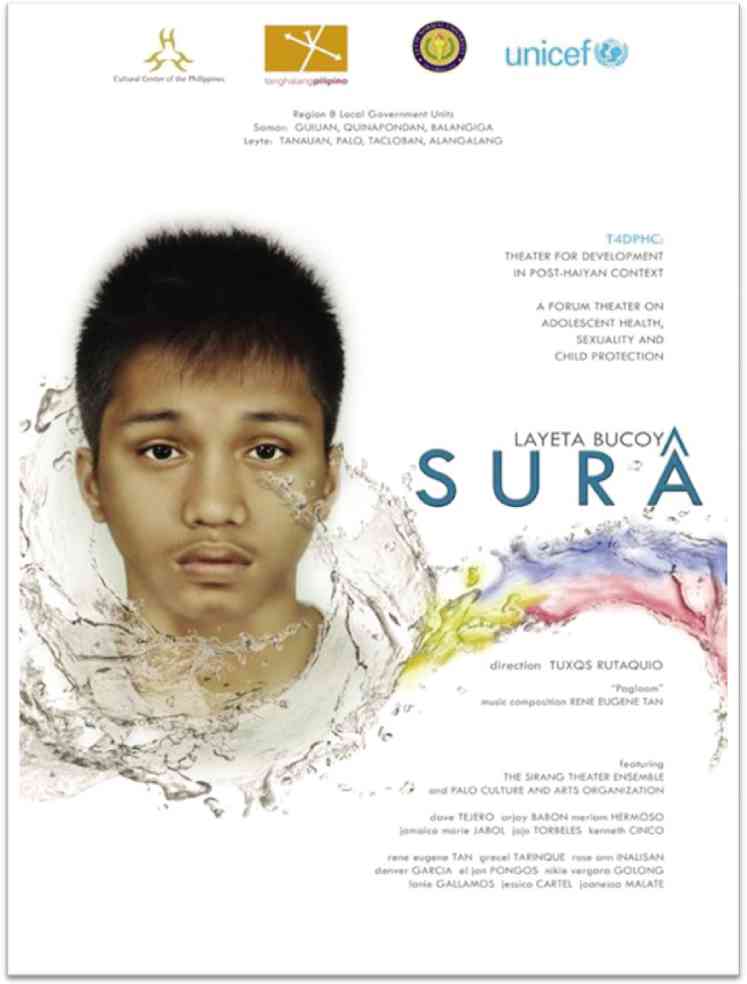 ‘Paglaom’: How theater has become an instrument of healing and remembering in post-‘Yolanda’ Visayas

I was in Tokyo, Japan, last year representing the Philippines at the Asian Performing Arts Festival when Supertyphoon “Yolanda” struck.

By the time I was able to open my Facebook account, the storm had ravaged most of the Visayas region. I watched in horror online as the fury of this storm lashed at my mother’s hometown in Samar.

I feared for my relatives who lived there and in some areas of Leyte. I felt helpless and all the more guilty that I was comfortable in my hotel room elsewhere in the world while others were suffering.

My only Filipino companion then was a dear friend and colleague, Tricia Okada, who resides in Tokyo. She was a volunteer in the aftermath of the great tsunami that destroyed many areas in Japan. We went for coffee and discussed what we could do. We began talking to some organizations in the Philippines about how to give donations since it was difficult to get to Tacloban in the storm’s aftermath.

By the time I got back to the Philippines, I vowed that I would help in any way I could.

A few months later, we received news that Tanghalang Pilipino was collaborating with the United Nations Children’s Fund (Unicef) on a new theater for development project, based on the success of our previous forum theater productions—one on HIV and AIDS Awareness in the communities of Pasay and Caloocan; and another on health and hygiene in the post-“Haiyan” (the international name for “Yolanda”) context with the World Health Organization, which we toured in Eastern Samar.

TP’s Theater for Development in a Post-Haiyan Context (T4D-PHC) led to a new project with Unicef focusing on educating communities about child protection and rights, and adolescent health and sexuality through forum theater. Derived from the Theater of the Oppressed by Augusto Boal, forum theater has actors facilitating a discussion and engaging with the audience about the key messages in the performance. As such, the audience becomes “spect-actors” who engage in a discussion with the actor-facilitator, and with the audience as a collective.

What was most special about this TP-Unicef project was that the actors for the forum theater performance were coming from the region where we would tour the production. The first leg would be in Eastern Visayas, with student-actors from Leyte (Tacloban and Palo) who were also “Yolanda” survivors, and rehearsals and the pilot performance happening at Leyte Normal University (LNU).

The actors for the Eastern Visayas tour trained with TP Actors Company members Jonathan Tadioan and Marco Viana. Fifteen of them came from the Sirang Theater Ensemble under the tutelage of Prof. Jose Llanza of LNU, and two members were from the Palo Culture and Arts Organization.

A major challenge for this T4D production was creating material that not only represented the communities but also showed collectively their experience of Typhoon “Haiyan.” Playwright Layeta Bucoy, a constant collaborator, flew to Tacloban in early September to talk to the actors about their experiences. Their stories became the soul of “Surâ,” the resulting theater work.

“Surâ,” translated into Waray by Voltaire Oyzon, is about a child, Intoy, who is taken away from his family by the typhoon. As he journeys to find his kin, he goes through the process of deciding what to do by directly engaging the audience and asking them questions. When he is reunited with his teenage sister, Sarah, she, too, faces her own conflicts with her boyfriend, Paolo, as they are forced into “playing house” in the cramped evacuation center.

When I first flew to Tacloban in May, I could still see vestiges of the damage inflicted on the region. From the plane’s window, I could see palm trees with lifeless leaves and stooped arches. While it seemed things were back to normal, it remained a deeply scarred place. It was no different when I went back for the long weeks of rehearsals in September for “Surâ.”

While I always give the impression that I am from Manila, Leyteños are surprised that I understand them when they speak Waray, or that I can speak the language, even if not fluently. As Waray is spoken in my home in Manila, my familiarity with the language was something I could use to show that I was no stranger who just came for a visit; that, somehow, I could understand them and their plight.

Everywhere I went, I asked people about their experience of the storm, and there would always be silence at first. I could see in their eyes how horrifying it was and how they wish it didn’t happen—from the old man who drove me to the hotel, to the security guard, the hotel manager, the street vendor. One person even told me he couldn’t understand why it happened to them and wondered aloud if they actually deserved it.

When I started rehearsals for “Surâ,” I told myself not to be too emotional in relating to the script and more so to the young actors who had lived to tell their stories. I wanted to be more objective and to create an atmosphere where we could work toward realizing the vision of this play.

We started by mapping out the possible answers to the questions raised by the script. Through this process, the actors-survivors were able to share their stories, personal experiences and what they heard from other people during and after the typhoon, such as stories of looting, being separated from their loved ones and their time in the evacuation centers. Though objective in their answers, I could feel that it was very difficult for these survivors to recall these events.

At some point during rehearsals, I felt that I was not helping them enough. I could sense that there was a wall standing in the way of the actors and the characters they were portraying. By this time, the finale song “Paglaom” (“Pag-asa”) was near completion, composed by Rene Eugene Tan, also an actor of the play.

I planned on using this song to break that wall. When it was completed, I spent one day rehearsing the song. It was beautifully composed and arranged. But most importantly, it did its part—it broke the wall. The music’s power triggered the emotional heart of the piece.

The next couple of days, we worked on re-experiencing and recreating the events in “Surâ,” while being careful and conscious about how these made the actors feel, given that these events were all too real for them. I felt then— and still do—that our proudest moment was when the actors pulled through with the hardest scene: recreating the storm, with Intoy narrating how he was separated from his family.

Another proud moment was when I saw that these young actors were already getting the hang of improvisation—a key element in successful forum theater. Speaking to audiences of various ages and genders, most of whom were also from Eastern Samar and with their individual experiences of the storm, it was important for the actors to move from interacting with the audience and back to the narrative of Intoy and his family, and back again.

Close to the pilot performance, the whole team, including the TP team from Manila, listened to feedback from adult audience members from the local government units that would be part of the “Surâ” tour. The young actors made me proud again by answering the questions about the play themselves, pointing out how the choices of the characters given to them were the most believable options in the face of a storm that they themselves had survived.

They also spoke of how they thought the audience would learn from the play’s key messages, because while forum theater might speak of options, the characters in fact move the story along with only one clear decision.

After kicking off the “Surâ” Tour in Guian, Eastern Samar, these Leyteño actors then started the Central Visayas part of this project in Cebu with the other half of the TP team. We are doing continuing theater workshops to help young Visayan actors deal with their emotional struggles a year after “Haiyan,” while equipping them with the tools to do forum theater.

We will be giving them the space to tell their stories, so that these might become the soul of a new script and a new play. We will stage a production about how the Visayas survived “Haiyan,” and we will tour this new production in the Central Visayas itself. Parallel to these performances, facilitators coming from the TP’s Actors Company will conduct an art therapy workshop for children.

And then we will do this again. And again—carrying the messages of child rights and protection, and adolescent health and sexuality in the aftermath of the deadliest storm in history to hit our country.

This is but a small drop in the ocean of needs we need to address after “Yolanda.” But I believe that what matters is that we continue to do what we can.

Tuxqs Rutaquio is the associate artistic director of Tanghalang Pilipino.