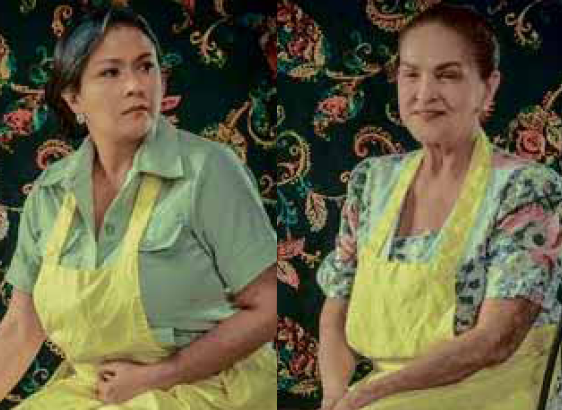 RACQUEL Pareño on alternating with Gina (right): “For as long as I did well and I pleasedmy same role. director and my audience, I didn’t feel I needed to compete with my ownmother.”

Gina and Racquel Pareño: Mother and daughter take to the stage

For several weekends at the CCP’s Bulwagang Huseng Batute, mother and daughter Gina and Racquel Pareño alternated in the part of Linda Loman, the wife of Willy Loman, in “Pahimakas Ng Isang Ahente,” Tanghalang Pilipino’s production of Arthur Miller’s “Death of a Salesman” as translated into Filipino by National Artist for Theater and Literature Rolando Tinio.

In the senior cast, film actress Gina was the hapless wife who must constantly cope with wayward sons and a husband (Nanding Josef) torn between thwarted ambition and the illusions of a good life. In the junior cast, daughter Racquel was the other Linda Loman who tried her best to please and appease an ambition-driven Willy Loman, played with heart and soul and a rare intensity by 29-year-old Jonathan Tadioan.

Gina’s Linda Loman was all-giving, and she made it look like she could survive the marriage if only she accepted everything about her husband and the kind of kids they had raised.

Racquel’s portrayal was on the more subtle side, making her last lines in the finale all the more poignant and devastating.

This is only Gina’s second theater outing; in the first, “American Hwanggap,” she got to work with actor-director Mario O’Hara.

That theater baptism was memorable, she says, because “working with Mario was completely satisfying. He had a way of making you feel at ease. He supported a newcomer like me all the way; indeed, it wasn’t hard to love him as a person. But first and foremost, there was a lot in him you could emulate as a stage actor.”

She remembers a smooth opening night: “I was at ease instantly. I knew I had to do justice to the part as my commitment as an actor. I got into my role the very minute I left the house and drove to the theater.”

The part of Linda Loman, though, was a much tougher one, not least because the play runs for three hours and a half.

“The script was so thick and there was a part where I had to memorize five pages of dialogue; I had to convey different shades of emotions, different nuances,” she says. “I had to constantly pick my brain and test how far and how deep I could get into the part.”

Gina relies on her own technique; she writes down her lines, no matter how long they are, and repeats the process several times until she has committed everything to memory. “I’ve been doing this even in films and teleserye, and it works. Even my film scripts are peppered with notations and red stars opposite the lines I need to work on,” she says.

However, she found it hard to relate to Linda Loman as a martyr wife: “I wouldn’t want to be like her in real life. But since the character demanded of me to be just that kind of emotionally battered wife, I had to work hard to act and sound like her onstage.”

While Gina is 65 and just about the age of Linda Loman, Racquel is only 43 and had a lot more to do to look and sound like her character.

“This was my most difficult role so far,” she admits. “You were always onstage most of the time and you had to be in character from start to finish. Apart from the age gap between me and my character, this play happened in the 1940s, so I had to research a lot on how people moved and led their lives in that era.”

And then there was the matter of alternating with her mother in the same role.

“The tendency, of course, was that you would be pressured to do well, being the daughter of an award-winning actor-mother,” says Racquel. “But I did not succumb to this temptation. I am a totally different person, with totally different ways of expressing myself. The same with my mother; in fact, we could not ask tips from each other on how to attack the role, because we had different ideas about how to portray the part. But, in the end, for as long as I did relatively well and I pleased my director and my audience, I didn’t feel I needed to compete with my own mother.”

Racquel has been in theater for less than two years, but her portrayal of a Jewish wife forced into playing Shylock in Tanghalang Pilipino’s “Der Kaufmann,” an adaptation of Shakespeare’s “The Merchant of Venice,” earned her a 2013 Philstage Gawad Buhay! trophy for Outstanding Female Featured Performance in a Play. She also appeared in TP’s “Sandosenang Sapatos” and “Ibalong.”

“Pahimakas” was only her fifth play.

“I turned to theater when I was already 40 to give my life a new challenge,” she says. “Without telling my mother, I joined the workshop of Tanghalang Pilipino, attended classes and rehearsals religiously, and my efforts paid off. I was accepted in the company. But it wasn’t that easy, because you had to be evaluated as a performer every six months. It was only when I was accepted that I told my mother I wanted to try theater. I basically like the high that goes with acting, especially if your effort is recognized by your director and colleagues. When I won my first award, I told myself I must be going somewhere after all.”

Just what do they have in common?

“In theater, we don’t overprepare. We mark the lines and the scenes, and it’s only when the lights hit us on stage that our adrenaline flows. In that sense, I am like my mother,” says Racquel.

Like her mother, she struggled with the martyr-wife aspect of Linda Loman: “I could relate to her only when she asks her sons to be more understanding of their father, who is going through something difficult. In real life, I don’t like children who disrespect their parents. But since my character calls for me to be the sacrificial lamb in the family, I had to simply internalize the part and do justice to it.”

“But I don’t bring my character at home,” she adds. “Linda Loman leaves me when I leave the theater. At home, I am just an ordinary mother at the beck and call of my children.”

Gina, who has spent four decades in the movies, calls her acting life very satisfying. But theater is something different.

“I like the discipline and the camaraderie. When I see my daughter work on her lines and get into her costume and apply her own makeup before a performance, I feel so happy for her. I know she has discovered a highly rewarding life apart from her being a mother,” says Gina.

To Racquel, the only advice from her mother that counts is: “Love your work, love what you do and give it everything you got.”