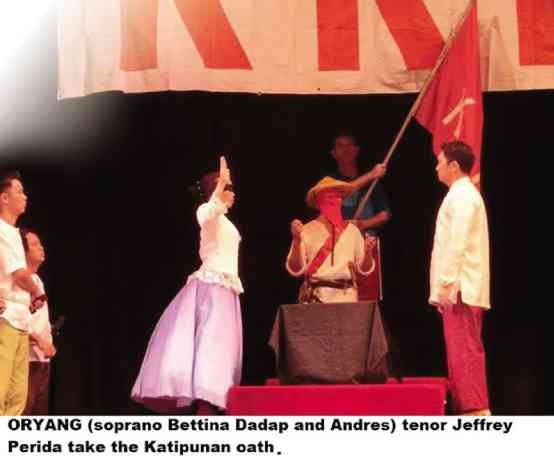 IT HAS never been given the big treatment it deserves. Perhaps the Nov. 30 show at GSIS Theater will redress that oversight.

In my admittedly biased opinion, no other play, whether straight or musical, has effectively captured the passion and death of national hero Andres Bonifacio than “Andres Bonifacio: Ang Dakilang Anak-Pawis,” with music by composer Jerry A. Dadap and libretto by dramatist Dionisio Salazar and poet Rogelio G. Mangahas.

First presented in 1979 at the Cultural Center of the Philippines with a cast of 200, bankrolled by the Puyats, the musical play has since been presented off and on through the decades, but never given the big treatment it deserves.

Last year being the Supremo’s 150th birth anniversary, there was a slew of productions paying tribute to Bonifacio. Dadap’s Andres Bonifacio Concert Choir (ABCC) and the University of the Philippines College of Music came out with their own versions of “Ang Dakilang Anak-Pawis.”

And earlier this year, in commemoration of Bonifacio’s death anniversary on May 10, the National Historical Commission of the Philippines held rituals while the ABCC staged dramatic excerpts of the musical in, appropriately enough, Maragondon Church in Cavite, near the site where the Supremo was hacked to death along with his brothers Ciriaco and Procopio.

Now, on Nov. 30, Bonifacio Day, in the CCP Complex, Pasay City, the musical will be restaged at the GSIS Theater (call 0922-28l5879) in performances (3 p.m. and 6:30 p.m.) sponsored by the National Commission for Culture and the Arts, the Women in Development Foundation, International Visitors Leadership Training Program, Atty. Rod Domingo and Help Foundation Inc.

“I find the libretto very challenging,” declares historian-critic Fe B. Mangahas. “Imagine narrating an unresolved and very controversial historical tragedy such as Bonifacio’s death and still be on the side of the truth. That’s difficult, but the librettists were able to come up with a credible interpretation of what might have happened.”

She adds: “I guess it’s because of their use of Filipino that is contemporary but appropriate to the period, hence effective and powerful.”

The music is among the most beautifully written for a Filipino musical. There are some 30 songs, mostly composed by Dadap along with a few based on traditional sources, including Katipunan songs and Julio Nakpil’s “Marangal na Dalit” (which would have been our national anthem had Bonifacio won) and “La Deportacion,” written by Jose Rizal when he was in Dapitan.

“My music is direct to the point, based on the script,” says Dadap. “I did not do art songs, walang paliguy-guy (no beating around the bush).”

The first part of the play is generally lighthearted. “Awit ng Manggagawa” shows the workers bitching about how hard life is and how you have to work like a dog. “Anuman Gagawin” sounds like a tender ballad, but is really a manual on how to come up with quality products! Andres tells his siblings to create walking canes, slippers and bakya (wooden clogs) with art and finesse.

Heights of lyricism are attained in the love duets between Andres and Oryang, soon to be his wife. Tenors Jeffrey Perida and William Serrano, and sopranos Bettina Dadap and Melody Babula, alternate as Andres and Oryang, respectively.

In the second part, the mood changes and grows darker. The Katipunan is exposed. Revolution breaks out. Bonifacio journeys to Cavite to mediate the deadly internecine rivalry between the Magdiwangs, who are for the Supremo, and the Magdalos, who are Emilio Aguinaldo’s henchmen.

The Magdalo faction, filled with “Cavitismo,” considers the Katipunan a spent force and wants it changed by a movement they feel is more revolutionary. In the tumultuous Tejeros convention, Bonifacio is elected director of the interior, an important post. But his qualifications are questioned; in fact, he is insulted, and he declares the results null and void. This leads to his doom.

Dadap, a history buff, has revised some of the material, including a final aria he composed based on a poem by colibrettist Mangahas. In the ending, we see the fallen Bonifacio surrounded by Katipuneros, and his spirit rises for one final lament and gut-wrenching cry for freedom: “Mithi mong paglaya, bayan!”