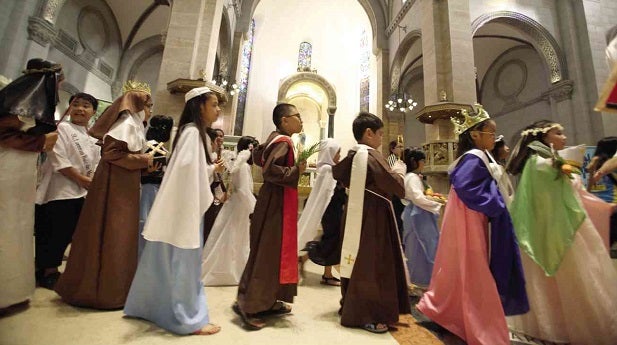 WHEN SAINTS COME MARCHING IN Zombies and phantoms, move over. Children choose to don the garb of holy men and women on the eve of All Saints’ Day during a “march of saints” led by Manila Auxiliary Bishop Bernardino Cortez at Manila Cathedral. Bishops earlier urged children to dress in the manner of saints and not witches on the solemn day of Christian saints, which is today, All Saints’ Day. EDWIN BACASMAS

Practicing yoga and believing in feng shui, horoscopes and lucky charms can make one vulnerable to demonic possession, warned an exorcist of the Archdiocese of Manila.

“When you practice yoga, you are told to ‘empty your mind’ while saying [the mantra] ‘om,’ so you can feel relaxed. But when you empty yourself, you’re opening yourself to possession. You have to be careful because demons might take advantage of (this) empty [vessel of your soul] and possess it,” Msgr. Jay Bandojo said during a recent talk at the Arzobispado de Manila in Intramuros.

‘Spirit of the Glass’

Playing ‘Spirit of the Glass’ (the local version of the Ouija board), even as an observer, can be risky, he added. “The mere fact that you took a peek [means] you’re already contaminated. It means there could be a [demon] attached to you because of your curiosity.”

Instead of asking people to empty their minds, Catholic teaching tells the faithful to “center on Christ, on the angels, on saints and on Mama Mary,” when they “pray, meditate or contemplate,” said Bandojo.

Bad spirits also attach to people who engage or have interest, in hidden knowledge “usually (found) in masonry, illuminati (groups), scientology (and) fraternities … spirits attach to you when you engage in those,” the monsignor said.

People may also be vulnerable to demonic possession through “the sin of omission and sin of commission,” he added.

“You sin because you are doing what is not good, and you sin because you did not do what is good,” he explained. “Every sin has a demon involved. Do not think that it’s just a small sin or (that) nobody knows about it because you already allowed a spirit to enter you, to be attached to you,” Bandojo said.

Cursing and being cursed also open one to demonic possession, this exorcist said.

“So even at the height of your anger, don’t curse other people. Parents, don’t curse your children because the demons will take advantage, they will ride on your curse. And you (would have) put problems in your children’s future,” Bandojo said.

He added that being in a state of shock or trauma also makes one vulnerable to possession.

“Because it’s like your mind is empty and demons will take advantage (of it). That’s why some trauma patients attempt suicide. They hear voices (telling them) ‘kill yourself,’ ‘kill your friend,’ ‘jump off a building,’” Bandojo said, adding that demonic possession can result in the destruction of one’s personality, relationships, health and wealth.

But being possessed by evil can also be avoided, he said.

“All you need to do is live the sacraments… live a good Catholic life, away from (bad) influences,” Bandojo said, adding that apart from basic sacramentals like holy water and exorcised oil and salt usually used by exorcists to ward off demonic possessions, religious items such as rosaries, scapulars, crucifixes and prayer books can also protect us from evil.

“But don’t use them like amulets,” Bandojo cautioned. “If you are influenced, if you are open [to influences], these things become ineffective. They only become effective if you are in (a state of) sanctifying grace.”

Do amulets, charms and ‘anting-anting’ work?