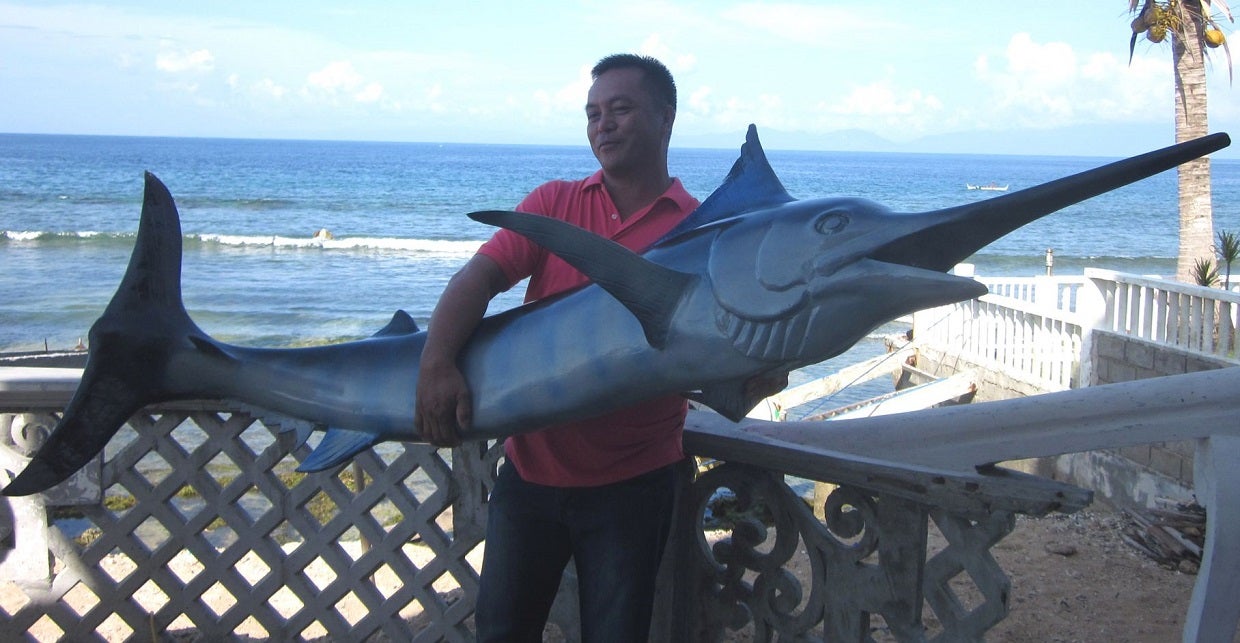 It would be easy enough to conclude that having grown up in Biri, an island in Northern Samar known for its towering rock formations, he might have been inspired to lay mortal hands on wood, loam and stone by the natural monuments sometimes described as having been sculpted by the gods.

But Antonio “Dodoy” delos Reyes Jr. is taken aback even by the mere suggestion, as though such analogy were the height of presumption bordering on the sacrilegious.

“Could I say I was inspired by the rock formations?” he echoes the question, shaking his head more in sheepish self-effacement than outright denial. “Those rocks were carved by nature, by God…,” he drifts off.

But almost in the same breath, he recalls being out on the rock formations one day with a foreign guest, a globe-trotter who had seen many other natural wonders. “He climbed over the rocks, lay on the ground with his arms outstretched as if to embrace the rocks and said, ‘Dodoy, this is God’s work, and this is the closest I’ve ever been to heaven. Thank you for giving me this experience.”

It was Dodoy’s way to explaining why he would never presume to compare his work with the Biri rock formations—never mind if one of his more popular works is itself a landmark monument towering over the waters through which all who travel to Biri must pass and lay eyes on.

The 18-foot Nuestra Señora de Salvacion image that guides bancas setting out from Lavezares town on the mainland is Dodoy’s most prominent sculpture, an image fondly called Santa by the locals who swear that it has tamed the constantly turbulent waters along San Bernardino Strait. Commissioned by lawyer Ramon Cuyco of Lavezares in 2005 upon the suggestion of a former parish priest of the town, Santa is believed to have reduced the number and ferocity of typhoons that used to pummel this typhoon-prone province. Since then, goes the local lore, there has hardly been any sea mishap along this route.

“I built the shrine in 19 days,” recalls Dodoy, who discovered his talent for carving and sculpting at the age of 10, while still a pupil at the Biri Central School. On the road to school was the home of the island woodcarver, a favorite stop for him as he liked watching the old man at work.

One day he found a tree branch in their backyard that, using a small penknife, he chiseled into a crucifix.Wondering if he had it in him to be like the old woodcarver everyone called Baba Edel, the boy showed the crucifix to the village priest who became his first critic and patron. He would later ask the boy, now in high school, to sculpt the image of the town patron, San Vicente Ferrer.

The crucifix project set him off on an impassioned course that, though it did not initially yield much in terms of income because he gave most of his artworks away or for a song, gained him a reputation as the island’s best local artist. His carved wooden doors, furniture and home decor are proudly showcased in the homes of many foreigners who have decided to settle on the island. Meanwhile, his sculpted angels and saints, heroes and characters tower over Samar towns on pedestals set up in church courtyards and plazas.

But what surprises people even more about this self-taught sculptor is the other role he plays with as much gusto: Dodoy is also a first-term town mayor, who has a degree in Sociology from the University of Eastern Philippines in Catarman.

If it were all up to him, Dodoy would have been happy enough spending long hours in his art workshop, or perched on a scaffolding giving form to his latest concrete creation. But the twists and turns of local politics thrust him into public glare, and the Biri sculptor was elected municipal mayor in 2013. It was not his first brush with politics though since he had served as chairman of the Sangguniang Kabataan of Biri when he was 17, and sat as town councilor for two terms, having topped the list of winners in the 2001 and 2004 Elections.

Even as a councilor, Dodoy never lost his passion for working with his hands. His hands bear many scars from years of experience. He opened a furniture shop at his seaside residence and custom-made orders from buyers, mostly resort owners or foreigners married to Birinon, have never stopped coming in.

“As soon as a session in the municipal hall was over, I would rush back home to my workshop, get out of my barong, and take out my carving or sculpting tools,” he says of his politics-art routine when he was a councilor.

But now that he’s mayor, he admits he can no longer follow the same routine. Getting behind a power tool or crouching over a block of wood once office hours are over would seem unconscionable with hundreds of his constituents demanding his undivided attention daily.

Still, he relishes whatever time he can pour on his art, this being the product of actual experience instead of book learning. Except for a few units in Architecture, Dodoy had no formal art education. Until some patrons of his craft gifted him with books on the art of the masters and he discovered the wonders of Google, he worked only on the basis of logic when doing dimensions and proportions.

When sculpting a monument in stone and concrete­—whether of god, saint or mortal—this island artist first works on the head. Using the tools of his trade, he carves out the face and expression, mostly from observation, experience and intuition. On a base frame of steel and wood, he then applies, molds and chisels on fresh concrete, working best at night when the medium is slow to dry.

Then he works on the pedestal or base, building up from the feet to the neck, before attaching the head. The last step, he says, is running his hands over the face. “The proportions may seem visually right, but I need to feel the contours of the head with my palms. That is when I get to know and feel whether the work is done because it is perfect to my touch.”

Among his most challenging pieces are the shrine to Our Lady of Salvation on the San Bernardino Strait, the 20-foot image of the Risen Christ in Brgy. Villa in Lavezares, also commissioned by Cuyco, which looks out to the sea from a mountainside, and an image of God the Father reaching out to a penitent man, a commissioned work by a resort owner in Leyte. This last image, he had just learned, will be transferred to Tacloban City in time for the anniversary of the “Yolanda” supertyphoon calamity.

Although he is more known for his monumental saints and religious figures, Dodoy’s favorite subject is the eagle. He has always been fascinated by the bird’s magnificent bearing and look and knows every detail of the magnificent bird of prey, even the exact number of feathers at the edge of its wings. But, he adds, the inspiration is also drawn from a free-flying eagle that seems to have made a regular stopover of his island home.

The mayor lives with his wife Amelita and 10-year-old daughter in a modest three-storey, sawali-roofed house overlooking scenic San Bernardino Strait, with Mount Bulusan in Bicol at the horizon. It’s a short five to 10 minutes habal-habal (motorcycle) ride to the world-famous Biri Rock Formations, where he spun many childhood dreams.

Relatives, friends, and patrons know that for now Dodoy the Artist would have to temporarily take a backseat to give way to Dodoy the Mayor. At the moment he’s not into building any more colossal monuments of heroes and religious icons—though he admits he would be hard put saying no to a commissioned work of St. Michael the Archangel.

“Being mayor is a job; it’s my profession for now,” he says. “Being a sculptor and artist is a vocation, it’s my life,” he adds. “If I fail to get a second term, so be it; I’ll take it as a sign that I should devote more time to my true love and calling.” •