The return of the pompadour | Inquirer Lifestyle ❮ ❯ 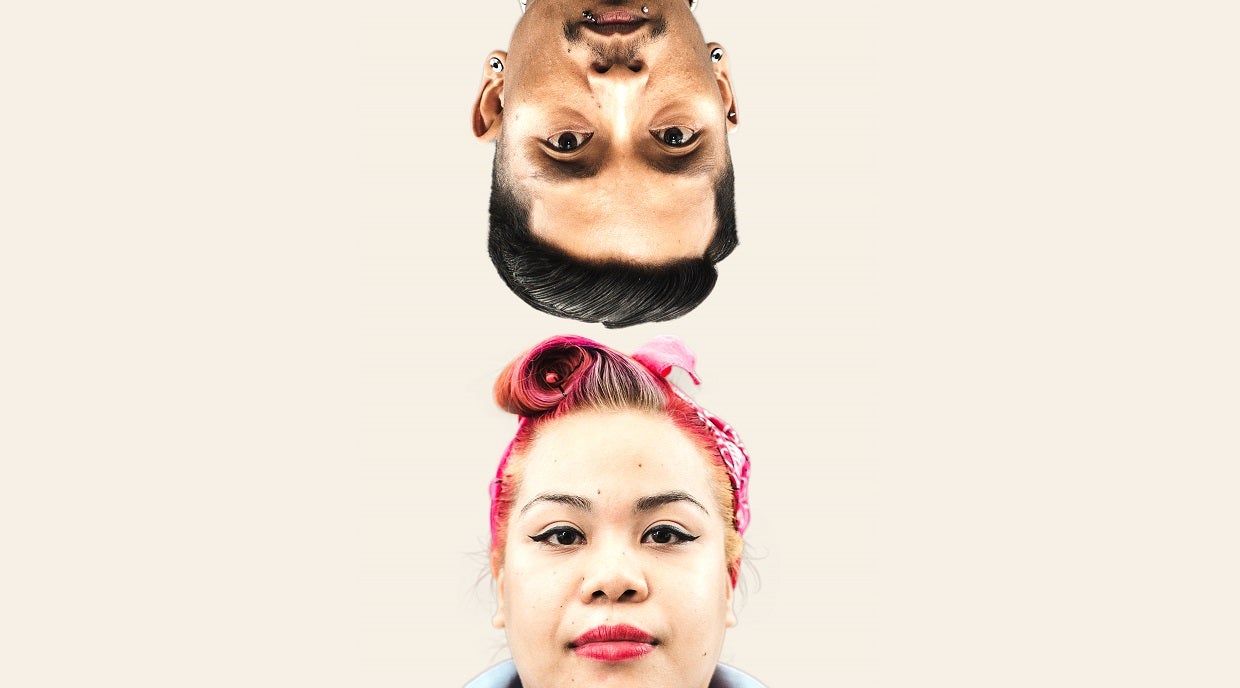 The return of the pompadour 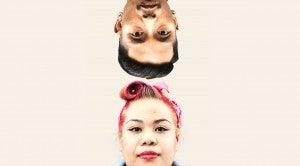 Grease is the word.

No, not the musical, but the actual stuff it was named after, the oleaginous medicated goo your lolo used to plaster his hair down with until it shone like Kenkoy’s mirror-finish dome.

I’m talking about pomade, the hair dressing that—until recently—dared not speak its name.

Yuck, who still uses this stuff? Apart from Erap, I mean.

Guys still lube their locks like they always have, but the products they put on their heads now go by various marketing euphemisms: “mousse,” “hard wax,” “hair clay,” “putty,” “cream”—and for those with a particularly strong masculine self-image, “crème.” Any name, in fact, that didn’t imply slick, oily, shiny or petroleum-based.

It’s Saturday night at Red Trend, a small hip clothing boutique nestled in a Mendiola side street, and guys are lining up outside, even though the floodwaters from typhoon Luis have barely subsided in this part of town.

The atmosphere is not unlike that of a rock club just before the band plays the first set of the evening. There’s the same air of anticipation.

Only, the guys are lining up not to rock out, but to get their hair cut.

It’s the monthly Slick Barbers Session, cheekily billed as Gupit Bintana, and with only 20 slots open for the night, and only three Slick Barbers to go around, a lot of the clients—mostly casually-dressed twentysomethings—have been waiting for hours for their turn at the chair, at P150 a cut.

The Slick Barbers crew—Mak Azores, EZ Abinal and Christian “Indio” Bendaña—specialize in the new old-school “fade” cuts: razor tapered at the sides and sculpted at the top into a slicked-back pompadour or “pomp” of varying height, with a part so sharp it could cut glass. It’s a more cutting-edge, post-modern variant of what used to be called “gupit binata.”

The new old hairstyles hark back to a bygone era of serious male grooming, before Beatles moptops and long hippie hair made regular haircuts at the barbershop “square” and old-fashioned.

The look is neat, aggressively styled and decidedly masculine.

The names of the various styles alone take you back to a time when men were men and looked like it: the Executive Contour, the High and Tight, the Flat-top Boogie and—my favorite—the Scumbag Boogie.

“We weren’t professional hair stylists,” recalls Azores, a business management graduate from FEU. “We just saw the beauty of the pompadour, but existing barbershops couldn’t duplicate the styles we wanted. All they knew was the usual barber’s cut.”

Besides, adds Abinal, for the P30 to P50 that neighborhood barbershops typically charge, the elaborate procedure for obtaining a pompadour cut, requiring an electric razor and precise scissoring, was too time-consuming and labor-intensive.

Unable to find barbers who could duplicate the styles they wanted, and fueled by a passion for the pomp, the trio decided to do it themselves in true D.I.Y. fashion.

“I bought an electric razor and started cutting my own hair, after watching a few YouTube videos on how to do it,” says Bendaña, a B.S. Psychology major.

Friends who saw their new look wanted the same cuts, so they started cutting hair informally. Word of mouth spread, demand grew, and after a few months of guerrilla street barbering, the trio started the Slick Barbers Sessions last June. As the name implies, rather than have a brick-and-mortar salon, the trio cut hair at Abinal’s place in Makati on the first Saturday of each month. Every third Saturday, they do a session at Red Trend. Other sessions can be set up through their Facebook page.

In the beginning, the trio used whatever hair products were readily available for sculpting their pomps—Bench or Gatsby hard wax or clay or whatever. But for that authentic old-school sheen, what a pompadour really calls for is pomade.

Most clients, however, balked at using the few products that could still be found.   Tancho, Morgan’s and Elizabeth Joy hair pomades were just a little too old-school. In particular the scent, redolent of musty aparadors and flores para muertos took some getting used to.

Luckily, elsewhere in Luzon, things were falling into place.

At around the same time the Slick Barbers were starting up, Hubert Lumbania from Pasig and Dennis “Dencio” Veloso from Sta. Rosa, Laguna were, unbeknownst to each other, developing their own pomade formulations.

Not coincidentally, both are musicians, Lumbania with ska outfit Hopskatch, and Veloso with Laguna hardcore bands Mihara and Divided We Fall—both musical subcultures that put a premium on hair style.

“I could see that a trend was forming,” recalls Lumbania. “It started with guys getting fade haircuts having to use gel or wax on their hair.”

That just felt wrong, but the only true pomades still available in the market were the aforementioned Tancho, Morgan’s and Elizabeth Joy. Lumbania initially thought of importing some of the pomades that were becoming popular in the US, new-school formulations with cool-sounding names like Suavecito, Cock Grease and Uppercut.

But a friend told him, why import when you can roll your own?

How hard could it be? All the information for making pomade turned out to be easily available on the Internet.

A lot of the new pomades were water-based, i.e., not real grease. Turning water into something that looked and felt like grease required a lot of chemical substances.

“Some of the imported pomades weren’t made for Philippine weather. They would melt in the heat and turn into oil, or wash off in the rain.”

After a period of trial and error in which he experimented on himself and his friends, Lumbania arrived at the formula for Grasa.Ph, his own pomade brand.

Another concern was the scent. In place of the “amoy ataol” (coffin smell) fragrances of old, he experimented with new school flavors like vanilla and coffee mint, which younger users could accept.

Grasa.Ph is a one-man operation, run from his home, mostly through social networks like Facebook. Although he has one or two resellers, Lumbania still cooks up his batches, packages and delivers them to the customer himself.

Meanwhile, back in Laguna, Veloso was doing his own R & D for what would eventually become Slicktight Hair Pomade, in between working at his day job as graphic designer for a pharmaceutical company, and playing with various bands in the burgeoning Laguna indie rock scene.

Like Lumbania, he had arrived at the idea of creating his own pomade after observing the various music subcultures in Laguna experimenting with various hair styles.

“I’ve always used pomade, but it was expensive to order from abroad. I would experiment by mixing various commercial brands.”

Eventually, he discovered his own formulation after doing some initial research and exchanging notes with a friend from Cebu who had moved to Texas, formulated his own pomade under the brand name Pomps Not Dead, and started a Facebook page devoted entirely to pompadour hairstyles and pomades.

Like Lumbania, he started his own family-run operation from his kitchen, marketing his product online and at events.

Running in the same narrow hipster circles, it was inevitable that Veloso, Lumbania and the Slick Barbers crew would meet, sparking a synergy that has begun to make waves even though their movement—if it can be called that—is literally just months old. Just recently, another player entered the market with yet another brand of pomade, this time called Urban Sailor.

Something more is clearly going on here.

“We want to bring back the culture of barbering, where the barbershop is a kind of man-cave where guys can hang out,” says Azores, who is clearly too young to have experienced such a man-cave first hand.

My old neighborhood barbershop was such a man cave in those golden years before martial law: a hangout for beat cops slacking off by getting their nails done, jueteng bookies taking bets, local bigshots treating themselves to a ritual trim, shave, massage and hot towel, and the neighborhood idlers just wasting the afternoon away. Barbers then studied racing forms or read Tiktik magazine while waiting for customers. The chalkboard advertised long-forgotten services: hell if I know what an Iper or a Boncilla was. Some kind of hair cut or treatment? The walls were papered with pinups and centerfolds from girlie magazines. The place reeked of bay rum, talcum powder and, of course, pomade.

Back then, a jar of Three Flowers pomade was part of every barber’s dresser kit, along with a bottle of vivid green hair tonic, a can of talc and brush. A haircut concluded with the barber spooning a big dollop of grease with his forefinger, spreading it around on his palms, and massaging it into the client’s scalp, after which he would comb and sculpt the hair into the desired shape, paying close attention to the part and its placement, how high on the head, left or right, etc.

The classic pompadour style—best exemplified by the likes of Joseph Estrada and Eddie Gutierrez—called for extra attention to how the crest of the top was contoured, like the swell of a wave, and the way the back was combed together into the classic D.A. (short for duck’s ass) shape.

But even then, pompadours and pomade were already being seen as old fashioned.

Blame it on the Beatles. Pre-fame, the Beatles wore their hair greased back in classic Elvis “quiffs.” During their stint in Hamburg in the early 1960s, they adopted the now-familiar greaseless, brushed-forward moptops (a style favored by the Euro-beatniks they encountered on the continent, which in turn was based on the classic Caesar cut).

With Beatlemania, greased hair became passé overnight. (Ironically, Beatles Pomade was one of the most popular local brands of hair dressing: it was even sold in single-use sachets at your local sari-sari store.)

The advent of the “freak flag” and the hippie era sounded the death knell for barbershops as far as young people were concerned. By the time young men went back to styling their hair in the ’70s, it was to unisex hair salons and not barbershops they flocked, and the disco mullets they favored called for copious amounts of gel and hair spray, products heretofore aimed at female users.

A couple of years back, however, trend-spotters started announcing the return of the pompadour, after celebs such as Brad Pitt and Justin Timberlake started conspicuously rocking pomps.

Closer to home, Richard Gutierrez has begun to slick his hair back in a pompadour like his old man, proving that it takes grease to be a Gutierrez.

More than just another retro fad, however, the style also heralds a return to old-school ideas of masculinity, in part fueled by the popularity of such shows as television’s “Mad Men” and Baz Luhrmann’s version of “The Great Gatsby.”

Locally, according to Mak Azores of the Slick Barbers, it’s a return to the idea of a gentleman’s hairstyle, and older attitudes about grooming and how a man should look, dress, and act.

Back in the day, a guy who dressed sharp and looked sharp, with his hair just so, was said to be “isputing.”