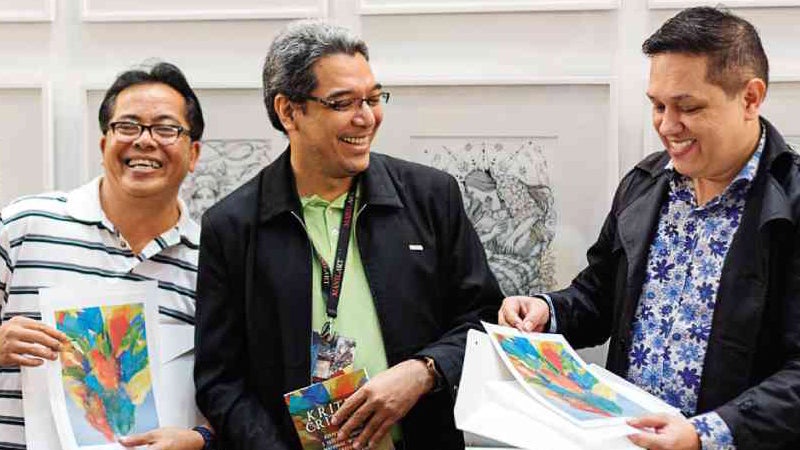 It is through painter and graphic designer Wilfredo Offemaria Jr. that “Kritik/Critique: Essays from the J. Elizalde Navarro National Workshop in the Criticism of the Arts and Humanities, 2009-2012” and “From the Major Arcana,” two of the University of Santo Tomas Publishing House’s newest titles, have gained remarkable artful identities. Colorful collisions of the visual and the literary, both books were recently launched at the concluded ManilArt 2014.

“From the Major Arcana” is an “intersemiotic interpretation” of 22 Tarot cards accompanied by Offemaria’s pen and ink illustrations.

“Poetry and painting, although different in their presentation and methods, find common ground in one essential concept, and that is metaphor,” said UST Publishing House director John Jack Wigley.

In the suite of poems by Ralph Semino Galan, the author translates Tarot imagery into poetry.

“My endeavor began in 2004, when I wrote my first Tarot card-inspired poem,” Galan explained, as he recalled a life-altering experience that jumpstarted the poetry collection.

Buttressing Galan’s written metaphors are Offemaria’s recreations of existing Tarot card characters and symbols, as the artist presents his version of mystical. Veering away from his distinct kaleidoscopic abstract, Offemaria shows Filipino renditions of Tarot images through intricate details and precise technique.

Offemaria’s “The Fool,” for example, is inspired by the character Juan Tamad. It shows a boy in salakot carelessly running about, his trusty aspin or asong Pinoy by his side. His “Magician” appears to be a faith healer, or an herbolario in the middle of casting some spell and his female characters, all clothed in varying Filipiniana garb.

“Kritik/Critique” boasts of Offemaria’s “Ode to J. Elizalde Navarro” on the cover, a large abstract work with splashes of brights set against a pastel background, reminiscent of the national artist’s penchant for vibrant color.

“Kritik/Critique” is a collection of essays authored by fellows of the J. Elizalde Navarro (JEN) National Workshop in the Criticism of the Arts and Humanities from 2009 to 2012 organized and sponsored by the Varsitarian, the official school organ of the University of Santo Tomas.

The workshop is a criticism workshop held in honor of National Artist for the Visual Arts J. Elizalde Navarro, himself an art critic and teacher when he was alive. Navarro, as it turned out, was art editor of the Varsitarian when he was a student at UST.

The book is edited by esteemed professor Oscar Campomanes, director of the JEN Workshop, and features 19 papers that are in-depth and extensive discourses on the arts and humanities.

“With the JEN Workshop and this anthology, we seek to continue contributing to the grand project of making critique a way of life and established habit of mind—not something as the mere and exclusive preserve of a privileged few—in our culture, believing that, as I emphasize in my own editorial essay, critique is essential to the transformation and development of our society and its cultural or artistic institutions or practices,” said Campomanes, who was referring to his foreword-essay, “Kritika Critique.”

Articles included in “Kritik/Critique” are “Lyric Poetry in Pixel: Toward a Postcolonial and Postmodern Poetics of Digital Texts” by Ma. Ailil B. Alvarez; “Defamiliarizing Perceptions of Shakespeare’s ‘Hamlet’” by Walter Ang‘,’ “How Do We Read Jose Dalisay’s ‘Soledad’s Sister’?” by Hammed Bolotaolo; “Noli On TV: Adaptation Criticism as Metacriticism” by Patrick F. Campos; “The Politics of Silence: AIDS Writing in France as Minority Discourse” by Richard Karl Deang; “The Beauty Myth in Three Short Stories by Contemporary Filipino Women Writers” by John Andrew M. Del Prado; “Maximal: On the Limits of Prose” by Gino Dizon; “Justice, Excellence, Nationalism and Integrity as the Maestro’s Legacy: J. Elizalde Navarro’s ‘Is This Philippine Justice?’” by Dennis I. Elizalde; “Paradoxico-Suprarealism and the Heteronomy of the Real” by Anne C. Ensomo; “Reading the Works of Cyril Wong and Lawrence Ypil as City Poems” by Miguel Lizada; “Tacky, Kitschy, Campy: Architectural-Aesthetic Fusions in and around Intramuros” by Gregg S. Lloren; “At Home in the World: The Ideological Construction of ‘Home’ in Selected Poems of Eric Gamalinda’s ‘Zero Gravity’” by Katrina Macapagal; “The Women of Nick Joaquin: A Critique” by Maricris D. Martin; “Individualism in V.G. Groyon’s ‘The Sky Over Dimas’: A Post-Jungian Reading” by Maxsim Moosavinasaab; “The Pain and Pleasure of Bodies in Contact” by Timothy Ong; “Myself I Must Remake: Can/How can Violence be a Form of Agency for the Subaltern Woman and the Diasporic Subject According to Bharati Mukherjee’s ‘Jasmine’?” by Joanna Parungao; “Amorsolo and Presidential Proclamation No. 1001: A Case Study in the Aesthetics of Law” by Jaime Oscar M. Salazar; “An Examination of Selves and/as Monsters in ‘Autobiography of Red’” by Francis Sollano; and “Refracting Anina: Problematizing National Identity and ‘Re-Presentation’ in a Philippine Young Adult Novel on Indigene” by Christian Tablazon.

The “Kritik/Critique” and “From the Major Arcana” book launches were sponsored by the National Commission for Culture and the Arts, Bago, The ManilArt Foundation, Artery Manila, Bombay Sapphire, Asti Martini, Coconuts Manila, King Sue and Spectagraphics.

“Kritik/Critique” and “From the Major Arcana” are available at the UST Publishing House (tel. 7323522), Solidaridad (tel. 2541068), and major bookstores nationwide.