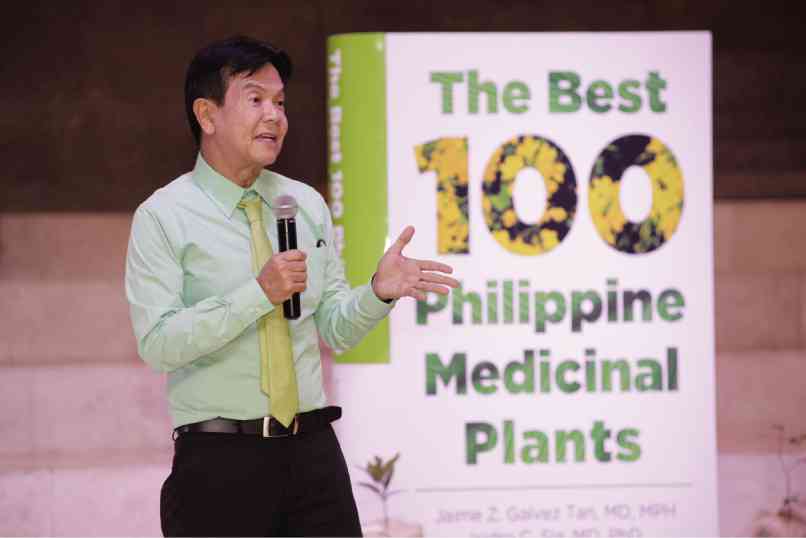 In the olden days, lanzones seeds were used to treat infections caused by parasitic worms, also to reduce fever and fight microbes. The compounds from its bark addressed stomach problems, flatulence and E. coli.

The leaf was found most effective in repelling the larvae of the deadly Aedes aegypti mosquito, which carries dengue. For beauty, the lanzones extract boosts skin moisture and lightens dark spots after a month.

Herbal medicine was once considered quackery, though it’s been used for centuries. The World Health Organization (WHO) approximates that eight out of 10 people across the globe use herbal medicine because it’s cheaper and more available than pharmaceutical drugs.

The Philippines has over 1,500 indigenous medicinal plants that have been identified by experts. Dr. Jaime Galvez Tan, proponent of traditional and natural medicine, and Dr. Isidro Sia, a pharmacology expert, have written a book, “The Best 100 Philippine Medicinal Plants”—which shows how plants can be cost-effective remedies, especially in rural areas where modern medicine is not accessible.

The entries explain the habitat of the plants, their scientific description, and studies on the effects of their chemical activities on humans and animals.

The book aims to show that these plants can also be used as prime ingredients for modern medication. Backed with research, the fruit and foliage entries reveal many possibilities for improving our well-being.

Guyabano (soursop), normally eaten as a fresh fruit or made into ice cream and beverages, has properties that cure scurvy and dysentery. Its tree provides insecticidal properties, while the oil from the seeds can destroy lice and bedbugs. Traditionally its leaves treat boils, abscesses, skin diseases, coughs, colds, nervous disorders and digestive problems, and are used for their tranquilizing effect.

Modern studies reveal that guyabano leaves have anti-diabetic properties as well. As an antioxidant, it prevents cell damage and generate cell renewal.

The bark and roots of the kalatsutsi (frangipani) have been concocted to stimulate bowel movements, menstruation and even abortion; treat gonorrhea; and cure abscesses. The buds, eaten with betel leaves, soothe fever.

The book quotes the WHO as saying that the flowers can heal   cough, dysentery, bleeding disorders and acute abdominal pain, while the bark is brewed into a mouthwash to treat serious gum infections.

The pulp of the kalabasa (squash) has been traditionally used as a poultice for boils, while the seeds can heal gonorrhea and urinary disease. The squash is rich with phytochemicals, compounds in plants that have hormone-like and antioxidant properties. Its seed oil is found to address hypertension, protect the heart and lower cholesterol.

The oil can also manage benign enlargement of the prostate by reducing testosterone activity. Another study on menopausal women who took the seed oil showed increase in the density of good cholesterol and better management of post-menopause symptoms.

Sesame seed (linga) oil is swabbed into the nostrils of children to prevent respiratory infections and diaper rash. Extracts from the roots of the sesame plant are concocted into hair washes while the leaves can be used to treat cholera, dysentery and catarrh. Mashing and boiling the seeds to make a decoction can cure hemorrhoids and improve bowel movement.

Years ago, crushed sampaguita flowers were mixed with camphor to make a decongestant. Patients with fever drank the boiled leaves. The decoction of the leaves was also a soothing eye balm and treatment for venereal disease.

Mothers in the provinces used the flowers as a poultice on their breasts to control the secretion of milk. The essential oil from the flower contains properties that inhibit the growth of bacteria and fungi.

For aromatherapy, the oil provides an uplifting effect which can combat depression.

The back of the book lists down common ailments and the corresponding fruits, seeds and vegetables that could assuage them. For instance, insomnia can be treated with dapdap, sesame seed, serpentina and onion.

Insanity can be managed with sampaguita and serpentina. For gout, try ampalaya, bitaog, ilang-ilang, malunggay, mustasa, pansit-pansitan, sambong and chilli. Vertigo can be allayed with pepper. Urinary tract infection can be addressed with kogon and kulitis. To prevent tumors, take kakawate.

Dr. Galvez Tan hopes that the plants we often take for granted will play bigger roles in our lives, used either as complementary therapeutic agents or included in our meals.