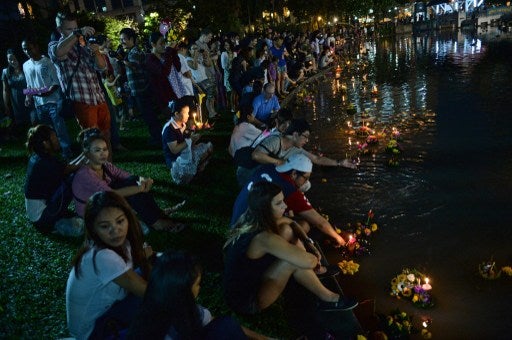 This picture taken on November 17, 2013 shows Thais and foreigners gathering at a park on the occasion of the Loy Krathong festival. AFP FILE PHOTO

BANGKOK — Revelers in northern Thailand have been asked not to launch sky lanterns near airports to avoid airborne accidents during a popular festival later this week.

Chiang Mai’s Air Traffic Control Center said Tuesday that it has declared a 5-kilometer (3-mile) restricted zone around the airport where lanterns are banned from Wednesday to Friday, when the festival takes place.

During the festival known as Loy Krathong, Thais float small rafts into rivers to ask for forgiveness from the goddess of water.

Residents in northern Thailand believe that flying the floating lanterns also will rid them of bad fortune, but it has posed aviation risks in recent years.

Several airlines, including Thai Airways, have adjusted their flight schedules to give way to the lantern floating, which takes place mainly after dark.