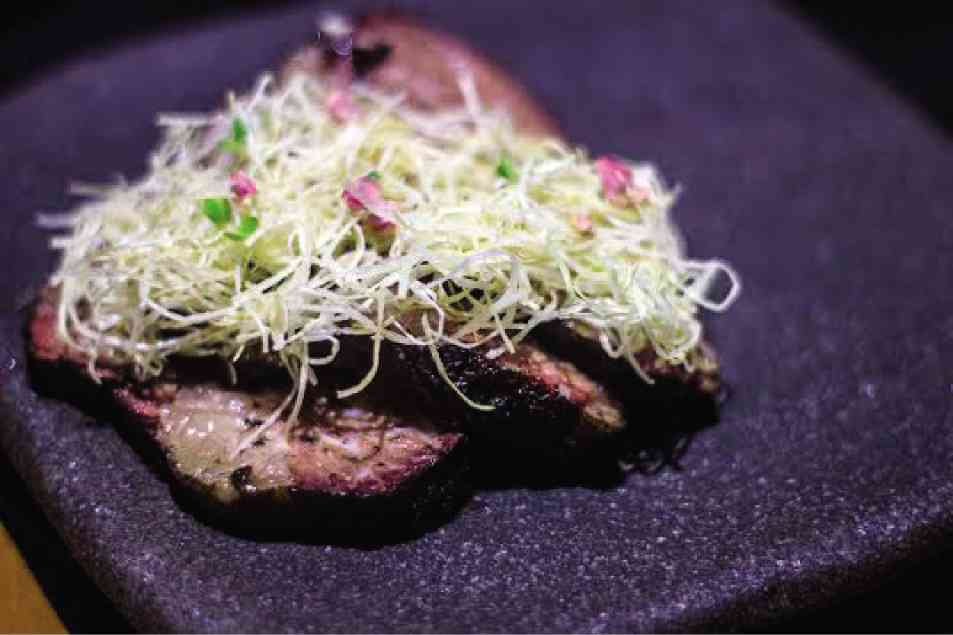 Since opening in the Penthouse on W Fifth Avenue in November 2013, Black Sheep has risen above the flock of trendy eateries in Bonifacio Global City by offering unparalleled city views and imaginative food that deftly straddles the line between fine dining and fun dining.

From the theatrical open kitchen, chef Jordy Navarra and his brigade produced an original menu featuring such highlights as foie gras Ferrero Rocher, a bonbon of duck liver purée rolled in white chocolate and can-died nuts, and an unusual savory ice cream infused with smoked longganisa that captivated diners.

A year later, the restaurant has unveiled a new repertoire demonstrating a more refined focus of its original vision of playfully innovative food. Simplified to two prix fixe menus pivoting around locally sourced traditional ingredients, the new dishes draw their inspiration from five environs of Philippine food culture—the streets, sea and river, garden, and farm, plus sweets—with the aim of evoking nostalgia through taste.

The comprehensive seven-course set kicks off with a duo of amuse bouche, beginning with a creamy tartare of Bukidnon lamb on squid ink flatbread and topped with cashews, grated tuna roe from General Santos and kabayawa (a citrus akin to dayap) zest.

A pork blood meringue follows with a cascade of distinct flavors from preserved tomatoes, coconut milk, green mango, pork, squid ink and kabayawa that eventually merges into the familiar taste of Bicol Express.

Next, a bottle of Kwatro Kantos—a pleasantly salty libation of gin and preserved calamansi—is served as palate cleanser and a tambay-style companion to pulutan of kwek-kwek-inspired smoked quail egg, cooked sous-vide so that it dissolves on the tongue-like velvet smoke, and a chicken meatball served in a shell with a Mandarin orange foam and salmon roe.

From Philippine waters come grilled grouper, its skin flash-fried to delicate crispness, resting on an islet of wakame seaweed in a clear broth of kamias and guava, while creamy goto is reinterpreted with finely diced cauliflower providing the texture of rice in a rich coconut cream, and fatty crab roe sauce surrounding crabmeat enhanced with shaved black truffle.

Back on terra firma, the bounty of the native garden is recreated in Bahay Kubo, a dish that incorporates all 18 vegetables mentioned in the classic folk song. In chef Navarra’s version,

Further afield on the farm comes Kitayama smoked beef brisket lightly soured with batuan and accompanied by a shank of bone marrow smoked over a bowl of palay, black rice and charcoal. Rich without being unctuous, the marrow is scraped onto heirloom Cordilleras rice and mixed into the grains like a smooth sauce.

To herald the meal’s end, a tart green mango sorbet is served with cool cucumber over a gravel bed of nitrogen-frozen wood sorrel that dissipates into perfumed vapor on the taste buds. The sweet finale arrives as a napoleones of scrumptious mango, white chocolate and cream ganache piped between homemade sheets of filo pastry, and nestled over spiced mango compote with sweet honeycomb candy and a mango film.

At once familiar and strange, these dishes are the creations of chef Navarra, whose culinary approach reflects the influence of an unconventional pair of Michelin-starred role models. His interest in professional cooking was sparked by a show starring acclaimed English chef Heston Blumenthal of The Fat Duck Restaurant in Bray, England.

“It was almost like chemistry, a different approach to food I didn’t think was possible,” he recalled.

Little did he know that after graduating from culinary school, he would find himself in the UK under the tutelage of the alchemist-chef himself. From there, Navarra parlayed a memorable meal at Hong Kong’s Bo Innovation into a spot in the kitchen cooking, alongside the wickedly inventive and self-described “demon chef” Alvin Leung and his brand of “X-Treme Chinese” cuisine.

“It was a bit like what Heston was doing, but with Asian flavors and Chinese ingredients. That was eye-opening for me—the fun part of food made with what you find [locally],” he marveled.

With such stellar training, he returned to the Philippines to head Black Sheep, where guests can watch from the Chef’s Table that runs along the front of the specially designed open kitchen.

Rather than feel pressured by having an audience, Navarra is drawn to the theatricality: “I love that part—it’s an interactive, tableside experience. There’s more to it than just sitting down to have a meal.”

And fun, above all, is the main objective of his menu for Black Sheep. Like Blumenthal and Leung, Navarra revels in playing with food and with diners’ expectations.

“I want to surprise, but I don’t want to challenge. It shouldn’t taste too weird,” explained the pony-tailed chef. “The best way to go about it is to capture everything and not alienate anyone. Just make it fun.”

As new concepts for dishes continue to flow, the fare at Black Sheep remains in a state of evolution. Staying constant, however, are myriad thoughtful details, from the specially made pottery ware by artists Ugu Bigyan, Mia Casal and Joey de Castro, to guests’ names printed on eco-friendly vegetable paper, that have become part of the restaurant’s hallmark.

With such details both small and large, gilding a menu focused on local ingredients and familiar flavors transform into haute cuisine, Black Sheep continues to shepherd a lofty level of dining experience in Manila.