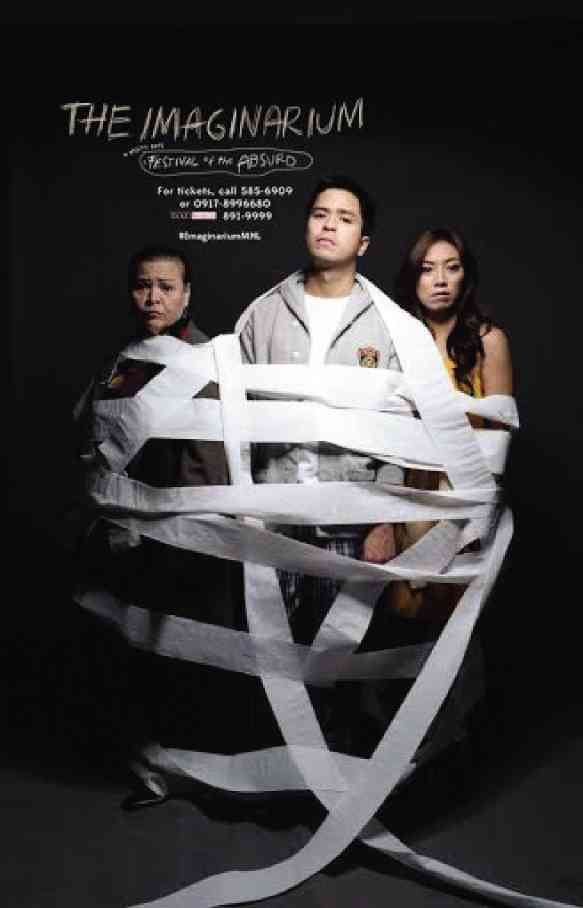 Sheila Francisco, Topper Fabregas and Caisa Borromeo in “The Boy in the Bathroom”

Toff de Venecia’s blackbox of surprises at ‘The Imaginarium’

The Sandbox Collective’s recently concluded “festival of the absurd,” dubbed “The Imaginarium,” proved to be the ultimate devotional exercise for theatergoers.

From Oct. 28-31, 13 productions curated by artistic director Toff de Venecia were laid out buffet-style across the Peta Theater Center’s three venues in a dizzying timetable that began at 1 p.m. and sometimes lasted past midnight.

Eleven of the shows played at the Blackbox Theater, and we’ve managed appraisals of the four that we caught.

True to their venue’s experimental nature, these shows weren’t polished to perfection but they showed promise, daring and innovation—three qualities that attracted audiences, resulting in packed houses and, in one case, even sending the ushers scrambling to add chairs.

“The play is memory. It is dimly lighted, it is sentimental, it is not realistic.”

So begins this Tennessee Williams classic, as narrated by the character of Tom Wingfield.

In the production directed by De Venecia, those opening words seemed to have been taken dangerously too close to heart.

It was dimly lighted, sure. Within the confines of a large gilded frame, the cast, garbed in all black, painted their melancholy portrait of the dysfunctional Wingfields: the single mother Amanda; and her grown children—Tom, the default pillar of the family, and the crippled Laura.

It was also sentimental, but the play’s inherent lyricism was almost extinguished by a more sinister life force. De Venecia’s “The Glass Menagerie” was an elegy of the Transylvanian kind, a nightmarish recollection of great unhappiness, a memory you’d rather blur and forget—and that’s not necessarily a bad thing.

Alas, this production was also not realistic. For the great irony of “Menagerie” is that only by becoming most real and vivid can it ever acquire that wispy, dreamlike quality. Only when its characters feel most corporeal can we ever buy them as ghosts from an earlier time.

The role of Tom, for instance, requires gravitas, a certain authority to hold the play together—which Nelsito Gomez lacked.

Instead, he was just this brooding young man perpetually longing for escape, like a fresh college graduate hungry for greener pastures.

Thus, without a commanding enough narrator, this “Menagerie” was left inchoate.

An even greater misfire was Jay Glorioso as Amanda. As the matriarch of “Menagerie,” Amanda is supposed to be a faded Southern belle, once the most coveted dame in town, now reduced to selling magazine subscriptions on the phone and dwelling on the scraps of her glorious past.

Glorioso could sure do “faded,” but her Amanda was too refined, too regal, too tamed; in her flowing black dress, she hardly came across as desperate and frustrated. Was that you, Morticia Addams?

Still, the overwhelming darkness did serve a fine purpose: It allowed for the second act, about the ephemeral romance between Laura and Tom’s friend Jim, to spark into the one shining sequence of this production.

The actors were Justine Peña, whose Laura was this terribly meek, shy and ultimately pitiful blossom of a girl; and JC Santos, who impressively transformed the character of Jim, the thinnest of the four roles, into an earthbound, kinetically charged and, therefore, the most realistic presence in this production.

It was truly their chemistry and fully realized interpretations that gave life to this bleak and fuzzy “Menagerie.”

‘The Boy in the Bathroom’

Michael Lluberes and Joe Maloney’s one-act musical gives us a man, David, with obsessive-compulsive disorder (OCD) who has been living in his bathroom for a year.

What he obviously needs is psychiatric intervention, but his mother Pam would rather feed him hand-flattened pancakes slipped under the door than call the shrink.

The third character is the total opposite of David, and to ignite some rom-com sparks, is a girl—Julie.

There was reason to applaud what became of the prosaic material in the hands of De Venecia as director. Sidestepping the cutesy and commonplace, this staged reading was the epitome of authentic charm, eliciting smiles at every corner without sacrificing what little inherent dramatic heft the musical had.

Topper Fabregas balanced the funny and the serious in David, and Sheila Francisco shaded the doting-mother routine with traces of the frighteningly overprotective (exactly why she could make a great Mama Rose in “Gypsy”).

But this show belonged to Caisa Borromeo, one of the most underrated actresses of the industry. (Her last big leading role was as a smashing Jo March in Repertory Philippines’ “Little Women” in 2010.)

She and Fabregas had a scene where their characters dare each other to undress. The confidence and nuance that Borromeo showcased here could only come from a genuine leading lady. Which is to say, give this woman her next big role, please!

Reviewing Ateneo Blue Repertory’s “Toilet: The Musical” this year, we wrote: “With last year’s ‘Sa Wakas,’ and now, ‘Toilet,’ Ejay Yatco is fast proving himself to be one of, if not the most exciting, young musical director and composer of the contemporary local theater scene.”

This time, Yatco was represented in “The Imaginarium” via his song cycle “Real-Life Fairytales,” featuring his original compositions sung by a crew of mostly fellow Ateneans.

Yatco’s lyrics have the most interesting imagery and wordplay, making it a real treat to listen to his songs.

And his music displays a keen eye for evoking tone and atmosphere.

“Fairytales” had some of the best singing of the festival. Borromeo, Abi Sulit and the ever-reliable Hans Dimayuga were standouts, each beautifully melding expressiveness with topnotch vocals.

Just a quibble, then: Could this song cycle have gotten any more depressing? That’s not a diss against theme or message. Everybody got it—real life and hard truths should not be sanitized. It’s just that, why did this hour-long show feel bereft of variation?

Yatco’s songs are individually outstanding, but clumped together, they sure made for a downward emotional spiral toward the culminating number, aptly titled “The Darkness That I Find.”

It’s absurd to think that a staged reading of a play could be the year’s most entrancing piece of theater, yet here was this one-night-only performance of Martin McDonagh’s “The Pillowman”—so terrifically acted and sharply staged that it was easily the towering highlight of “The Imaginarium.”

On Broadway, this play prompted all manners of reactions from the crowd, frightful fidgeting and walkouts included. None of the latter during this reading, but the roller-coaster of emotions emanating from the audience that night was almost tangible.

Set in a police interrogation room of an unspecified totalitarian regime, “The Pillowman” is about the inquisition of a writer named Katurian and his mentally challenged brother Michal by the good cop-bad cop tandem of Tupolski and Ariel.

Katurian, one soon finds out, is the author of a compilation of some 400 stories, almost all concerning a child dying in a most terrible way. (One ingests apples stuffed with razor blades; another, in a tale called “The Little Jesus”—you know how it goes.)

But it’s not the writer’s wildly morbid imagination that’s in question here. It’s that his stories have become reality, as bodies of children dying in suspiciously similar fashion have popped up in town, and he is the main suspect. (Not a giveaway: He’s not the killer.)

The beauty of this play lies in the storytelling, and the stories its protagonist tells. And as staged by director Ed Lacson Jr., “The Pillowman” was an immensely powerful back-to-basics experience in narrating a horror story.

The primal act of listening became the audience’s undoing, as Katurian’s gory tales took all-too-vivid life through the actors’ deliveries and inflections.

The cast was nothing short of sensational. Audie Gemora was an anguished Katurian whose eyes mirrored stories of their own. Robie Zialcita infused his Michal with equal measures of child-like innocence and murderous cunning. Niccolo Manahan was an appropriately explosive Ariel.

And Richard Cunanan gave what could be the comedy performance of the year, landing zinger after zinger like an Olympian archer, employing his burly physicality, his pitch-perfect line readings, gestures and expressions to utmost hilarious effect.

All things considered, this “Pillowman” could not have been a better Halloween treat. A fully staged production can be the only logical follow-up.