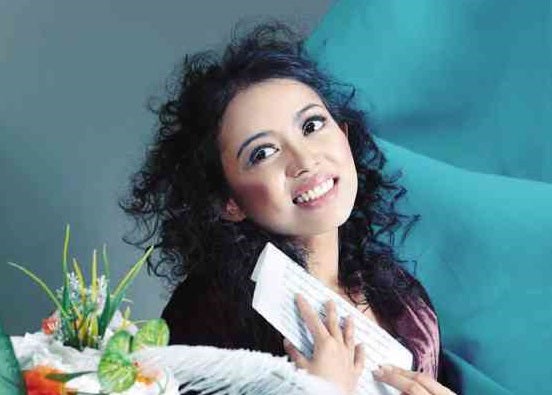 MARTHA Comia: “Sir Tony [Mabesa] is very strict, but he also likes to make us laugh! One time I forgot one of his instructions and he said to me, ‘Ano ba yan? You used to be bright, di ba? What happened?’”

Period sex farce ‘The Country Wife’ up next from Dulaang UP

Who will get pinched when a womanizer who pretends to be impotent (in order to get the married women, of course), meets an “innocent” and newly married woman who hails from the province? Expect a sex farce and comedy of manners to ensue from that premise.

The challenge in this production for Comia, as well as the entire cast, is that they all have to memorize two scripts. All actors cast in the production will do both English and Filipino versions. George de Jesus and Tarek El Tayech alternate as the husband, while Jay Gonzaga and Neil Sese alternate as Horner, the womanizer.

Born and raised in Marikina, Comia started dabbling in theater in grade school up until her stay in Miriam College.

“After college, I had a corporate job but I wasn’t happy,” she says. “Seeing my mentor, Tuxqs Rutaquio, and my high school best friend, Kathlyn Castillo, in professional theater as a director-actor-set designer and as an actress, respectively, pushed me to resign and try my luck in the industry. I auditioned for Tanghalang Pilipino’s ‘EJ: Ang Pinagdaanang Buhay in Evelio Javier at Edgar Jopson.’”

“That was my first play with a professional theater company,” she says. She went on to act in several productions for TP (“Mulan,” “Bombita,” “Pinocchio”) and the Philippine Educational Theater Association (“Noli at Fili 2000,” “Ismail at Isabel”). She was also able to join TP’s Actor’s Company, its resident pool of actors.

This is not Comia’s first foray into DUP territory. She was cast in its recent production of “The Duchess of Malfi/Ang Dukesa ng Malfi” and had previously acted in DUP’s Dulaang Laboratoryo series (where students’ thesis productions are staged).

This is, however, her first title role. “I am thankful, but also excited and frightened. My primary concern is how to flesh the character out, and how to play her well with all the other characters. In plays, the actors playing as an ensemble is more important than any one role. The title role is just icing on the cake.”

Given that this play satirizes hypocrisy, Comia hopes that audiences, especially the younger ones, leave the theater with a few thoughts to ponder.

“Even if this play was written centuries ago, they’ll see that this is how our society is today! It can be an eye-opener for them,” she says.

In the meantime, she’s having a good time preparing for her role. “Rehearsals are fun and stressful at the same time, but it’s a good kind of stress!” she says.

“Sir Tony is very strict, very precise. You need to be quick with your thinking and instincts as an actor. But he is also very witty, and he likes to make us laugh a lot during rehearsals. One time I forgot one of his instructions and he said to me, ‘Ano ba yan? You used to be bright, di ba? What happened?’” she says, laughing.

“If you’re absent at one rehearsal, when you return, he’d call on you during company call and ask what food you brought for the entire company as your apology. So all of our rehearsals are like fiestas!”