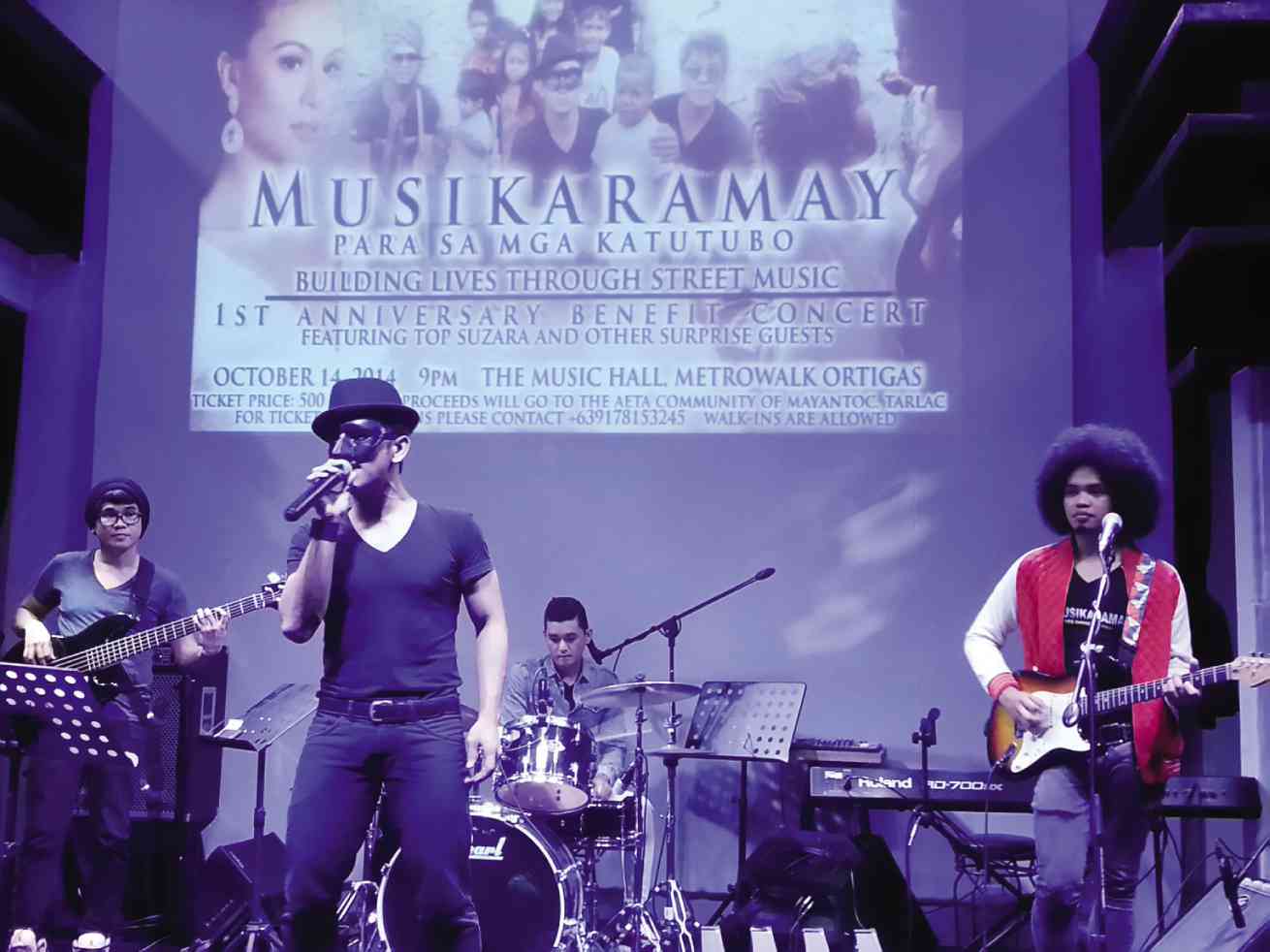 Excitement filled the air one rainy night recently at Music Hall in Metrowalk, where a benefit gig called “MusiKaramay” was in progress. “There she is,” our companion told us, pointing to a corner in the club, “si Valerie Weigmann, Miss World Philippines.”

Weigmann was lending her support to the band Climax, whose members are her friends and the proponents of the fundraiser.

Turned out that the band was celebrating the first anniversary of “MusiKaramay,” which Climax drummer Stanley Seludo said began at the MRT’s Boni Avenue Station last year.

“We asked the blind musicians playing there if we can perform on their behalf and we would give them all the money that we raise,” Seludo recalled, adding that he and his bandmates genuinely felt a sense of pakikiramay through music.

Thus the project MusiKaramay as street music for a cause, which Climax conceived with TV5 reporter and DJ Laila Chikadora.

Quite a number of artists were on the bill at the Music Hall gig, whose proceeds were donated to indigenous tribes; all the artists played for free, including Top Suzara; Kettle Mata who shared the stage with Janby Teodoro, Joven Palencia, Abby Clutario and Haro Echter; the band Filipinas, fronted by four energetic female singers; and vocal group Voices of 5.

We missed the early performance of Climax, but Seludo was game enough to ask his bandmates to go back onstage for a few more numbers. The band has apparently gotten better since we last saw it play a few years ago. Its cover of Michael Jackson’s “Love Never Felt So Good” sounded as great as the original—vocalist Max Guerrero holding court in his Green Hornet mask as Seludo, guitarist Kem Alia and bassist Norman Peradilla elevated the music to blissful heights.

Weigmann obviously had a good time, leaving the club at past 1 a.m. A few weeks later she told us through e-mail that she likes listening to neo-soul and the songs of John Legend, Maxwell, Jill Scott, D’Angelo and Lauryn Hill.

She said she’s polishing her catwalk skills for the top model and beach beauty segments of the Miss World pageant on Dec. 14 in London. She is also undergoing rigorous fitness training at Gold’s Gym for the sports challenge. Her rehearsals for the talent and dances of the world segments are on the last stretch as well.

The country’s jazz queen Annie Brazil has lost none of her trademark squeaks while singing at a recent club gig at Murphy’s in Makati—which has become part of her annual birthday homecoming routine.

She seemed to be gasping for air after a few songs in her Murphy’s gig, which Merk pointed out as asthma. Nonetheless she sailed through the rest of her set, backed by bassist Colby de la Calzada, drummer Jun Viray and pianist Romy Posadas, bringing back to life such standards as “’S Wonderful,” “All the Things You Are,” “The Very Thought of You,” “I’ll Remember April,” “Alfie,” “It Might As Well Be Spring” and a tune that never fails to brighten up our mood, “Satin Doll.”

Joining our table was Inquirer food columnist Margaux Salcedo, who moonlights as jazz singer. Merk lost no time in ribbing her with his endless jokes.

City of Dreams Manila’s vice president of public relations Charisse Chuidian was on the phone a few nights ago, sounding very upbeat as she briefed us on the coming attractions of the soon-to-open integrated hotel-casino-resort.

She said that there will be a promotional tour of two SM malls for a sneak preview of City of Dreams’ facilities: Nov. 14-16, Mall of Asia; and Nov. 21-23, SM Southmall.

To showcase its three luxury hotels—Nobu, Crown Towers and Hyatt— bartenders will show off their juggling and bottle-throwing skills; and DJs will spin the latest dance music for a sample of clubbing experience at City of Dreams.

Chuidian added that the hotel’s Pangaea and Chaos clubs would “whet our appetite” for the nightlife.

At the SM tour, mall-goers will get a chance to win instant prizes by signing up for exclusive Dream Rewards Membership. Members can use their cards when City of Dreams opens.

Early in his career, the 73-year-old Mendes played with his mentor Antonio Carlos Jobim—gaining fame as a proponent of bossa nova, the jazz-inflected version of samba, via a cover of what would become his signature song, “Mas Que Nada.”

Through the years Mendes has crossed over to pop; we’re sure his Filipino fans would love to hear again his dozens of hits including “The Trouble with Hello Is Goodbye,” “Waiting for Love,” “Pretty World,” and of course all the bossa nova classics they could dig in one night, plus “Real in Rio” from the 2012 animated film “Rio.”