Anilao town in Iloilo reinvents itself through Festival of Lights

Originally called Hinugyaw Festival, this year’s event was the first to have a dance-drama competition showcasing the town’s culture, heritage and history from the precolonial period to the present.

Unesco Philippines Commissioner and University of Santo Tomas Graduate School associate professor Eric Zerrudo said it was the first time a competition of that sort was held on Panay island.

Zerrudo, whose late father hailed from the town, helped in conceptualizing this year’s event in conjunction with Anilao’s 75th founding anniversary. 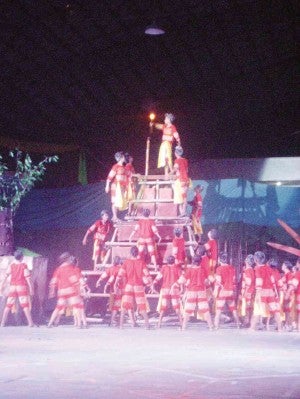 “It has broken away from the traditional concept of street dancing. Nagkaroon ng new phase, ng new concept (A new phase, a new concept was born) in staging history and heritage,” he said.

Labad, also the artistic director of the world-famous Loboc Children’s Choir, said the festival veered away from the usual street-dancing routines “na gumaganda lang dahil sa (that only look appealing because of) gimmicks and surprise production-design elements.”

“The concept of staging history in its different phases as it unfolded from the viewpoint of the people of Anilao is something very unique and very pioneering,” Labad said.

Labad said the contest challenged the dancers and performers because they were forced to do “communal research” and integrate their findings in a “clear dramatic structure.”

“I find this very refreshing, and I think this experiment must be made known to other festivals,” he said.

Other judges were Zerrudo; Nonoy Froilan of the Cultural Center of the Philippines; Sonny Cristobal of the National Commission for Culture and the Arts; scenographer and television production designer Rolando de Leon.

Banaag Festival took its inspiration from a Spanish-era baluarte (bulwark) with a watchtower made of bamboo in what is now Sitio Moros in Barangay Punongan.

Anilao Mayor Ma. Teresa Debuque said the sentinels atop the watchtower during the Spanish era would light a torch upon the sighting of incoming pirates, signaling residents to flee and hide.

“For us, the torch is the symbol of our unity, our oneness as a people,” she said, adding that the light signified their “sense of protecting one another, the sense of uniting and coming together” for the success of the town.

Debuque also said the light would guide their journey as a people, reinventing their sleepy image and their town’s tainted image due to the notorious peace-and-order problem in the 1960s and ’70s.

“Some said before that when they would go home to northern Iloilo, as soon as they passed by Anilao, they would duck because they would say, ‘Anilao na, Anilao na, habuyon kita’ (we might get stoned),” said the mayor.

“When we speak of Anilao, parang kinakatakutan (it used to be feared),” said Debuque, who explained family feuds, political rivalries and criminal activities gave the town a black eye in the past. 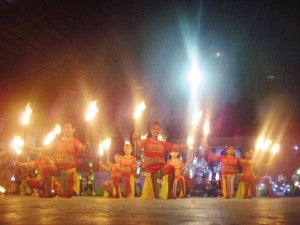 Today, the mayor said, the mindset of the people of Anilao has changed. Their cooperation, sense of volunteerism, ingenuity and skills have been unleashed because of the festival, she said.

Of the eight competing “tribes,” Tribu Karab-Karab was announced the winner. They dramatized the American colonial period until World War II.

Labad said the group won because of its passion and commitment, as well as its well-researched and highly dramatic performance.

A bonus during the event was the “mini concert” of Augustinian Fr. Jonas Mijares, rector of Santo Niño Basilica in Cebu— his way of thanking the Ilonggos for the help they extended to Cebu and Bohol in the aftermath of last year’s strong earthquake.