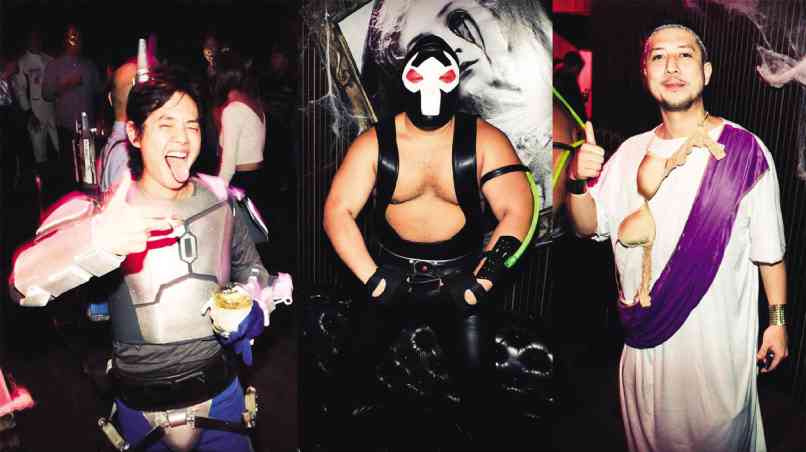 How we spent Hallow’s Eve in town

There was more life to the party scene in Quezon City recently, dahlings, as the refurbished Sulo Riviera hotel held a “Boo-tiful Night” last Halloween.

Dos Lunas offers choices where people can mellow out to chill music, jam with a live band, groove to its in-house DJs’ dance mixes, or sing their hearts out to “Rockaoke” nights.

Guests can also relax in lounge beds while smoking from an authentic Persian shisha (or hookah) with your choice of exotic tobacco flavors, said Tina Cuevas, who was responsible for hotel’s new look.

The photos, palangga, will tell you more on how this night of skeletons and other ghostly creatures played out at Sulo Riviera. We saw a lot witches and, if I may add, “bitches,” which made the party more exciting, dahlings.

From the north we drove down south in Makati, at The Fort Strip in Bonifacio Global City, where Aracama celebrated another Hallow’s Eve with a Zombie outbreak.

The restaurant’s greenery accents served as perfect setting for the “zombie attack.” The staff, who played the role of the walking dead, roamed while serving Johnnie Walker Black cocktails to the guests, who were dressed either as their favorite superheroes or the Wolfpacks from “The Hangover” movie series.

The party went on till dawn with dance music mixes by Karl Ty, Deuce Manila and Emil Angeles.

A few steps away was Prive, which was transformed into a haunted castle as the club hosted its annual Halloween Ball.

More superheroes, zombies and all sorts of characters mingled as the venue was packed to the brim by 12 midnight.

Meanwhile, 71 Gramercy was made to resemble a Tower of Terror where guests projected the vile and vicious look, a number of them living out their wildest fantasies.

Here, the music of DJs Mars Miranda, Euric and Toons Canoy kept everyone on their feet.

We spotted a guest as The Hulk on a break from saving the world and Solenn Heussaff as a hippie spreading love and peace—both of whom won as best in costume.

‘Guardians of the Universe’

And finally, Universe at Resorts World Manila welcomed more superheroes as well as dark angels, monsters, Gamora and Groot, among others, for its own Halloween bash.

Completing the gastrolounge and nightclub’s “Guardians of the Universe” theme were Infinity Gems, Loki’s Scepter, Infinity Gauntlet and the Tesseract.

Meanwhile, in the nightclub, guests came in space costumes to cheer Chino Roque, who won the lone slot for the Philippines after a series of grueling physical and mental challenges at the Axe Apollo Space Academy (AASA), a global contest that promised to send 22 winners to the edge of space and back aboard the private spaceship.

The revelers had fun dancing to the beats by DJs Ace Ramos, Mars Miranda, Martin Pulgar and Marc Naval.

If Dracula was in one of those Halloween bashes, he probably didn’t wince at the first rays of sunrise—when most of the party people were just staggering back to their homes. But that’s what Halloween is all about, ’di bala, palangga?

“Guardians of the Universe” was presented by Axe, Greenwich, Johnnie Walker Black and Redbull.