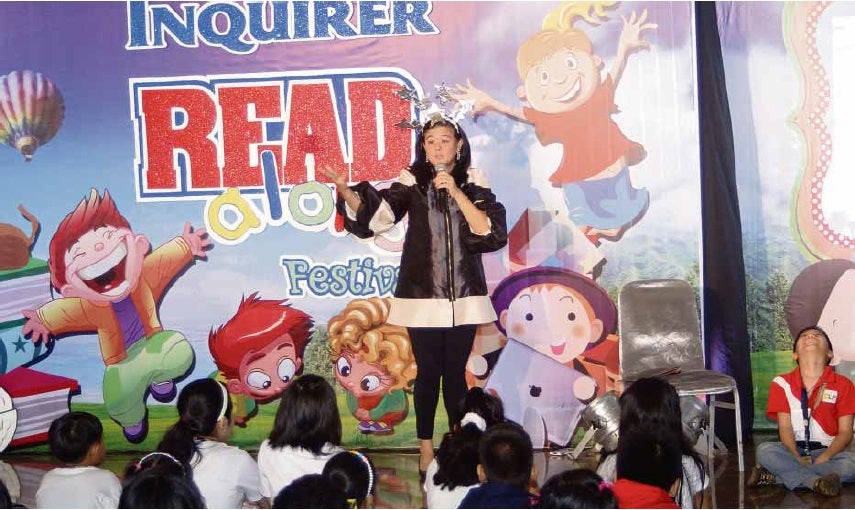 STORYTELLER INQUIRER president and CEO Alexandra Prieto-Romualdez at the opening session of the 4th INQUIRER Read-Along Festival at the Cultural Center of the Philippines. ROMY HOMILLADA

MANILA, Philippines–Hundreds of children from all over Metro Manila trooped to the first day of the fourth Inquirer Read-Along Festival held on Wednesday at the Cultural Center of the Philippines (CCP).

The first day of the festival also featured the Inquirer dancing mascot and crowd-favorite Guyito, a surprise flash mob led by Inquirer Zumba dancers and surprise raffle prizes, which included one-year subscriptions of Inquirer Plus and books from Adarna House, Vibal Publishing and Anvil Publishing.

“This year, we tried to make reading appear more fun for the children and we’re doing more to enhance the experience,” said Romualdez, who read “Umaga na Tala” by Russell Molina wearing a star-shaped headgear she made herself.

“We hope to encourage love for reading in whatever form. We wish to express our deepest gratitude to the volunteers, partners and different schools who continue to support the Read-Along program,” she added.

Copresented with CCP, this year’s festival is being held in cooperation with Dunkin Donuts, McDonalds, Adbokasiya on Air and Bayani Brew.

“I think the love for reading is very much alive,” Romualdez said.

“Reading teaches us ‘TLC’—how to learn and be creative,” said Bryan Prieto, who led the opening ceremony of the festival.

“I enjoyed the sessions and I was able to interact with other children as well,” said Danica, a Grade 5 student from H. J. Atienza Elementary School in Baseco Compound, Manila.

“For me it is still best to develop reading habits through books despite the presence of technology,” she said.

“I am thankful to have had the opportunity to read ‘Different but Same-same,’” said Vital, who coauthored the book with her husband, Jonard Vital.

“I think the story is timely because it is set after [Supertyphoon] “Yolanda,” and we just marked its anniversary,” she added.

The story tells of two pairs of friends from different countries who learned the importance of taking care of the Earth despite being of different nationalities.

“It was a beautiful experience. It was a pleasure to be here. The children in your country are very clever,” said Buranska, who is representing her country in the upcoming Miss Earth pageant.

“I hope in my country I can also organize something like this,” she added.

Returning readers Aguas and Ilacad read “Si Pagong at Si Matsing” by Virgilio Almario. “We really enjoyed reading to the kids,” Aguas said. “It really feels good to see the children listening attentively to you.”

“It’s really more fun to read books than watch TV, because reading exercises the mind, unlike watching TV, where everything is just spoon-fed,” Aguas added.

“Reading makes you think and doesn’t make you lazy,” Ilacad said. “I really had fun reading to the kids today, and I hope the kids had as much fun as we did.”

“This is my third time to read for the Read-Along and I feel more confident now reading to the kids,” said Curtis, who read “Ang Unang Baboy sa Langit” by Rene Villanueva.

“As I learned how to love reading books, I think my imagination and creativity have improved, along with my emotional intelligence and coping abilities,” she added.

“When I first heard that I was invited to the read-along, I was really excited to read to the kids. But when I saw my material, I was really intimidated,” said Neumann, who read “Si Isem sa Bayang Bawal Tumawa” by Eugene Evasco.

“I studied my book for a few days. I’m just happy I was able to make the kids smile,” he said.

“I think children who read when they are young can communicate better,” he added.

A storyteller herself, 11-year-old Louise Abegail from Pasig Elementary School said she learned a lot of styles on how to tell a story to kids her age even younger ones.

Louise Abegail Vergara is part of the Storytellers’ Club in her school which goes around the campus and shares stories to pupils of various grade levels.

“I am assigned to tell stories to kindergarten pupils and this read-along experience has challenged me to develop my skills as a storyteller,” Vergara, who attended the first session, told the Inquirer.

She said that her favorite story during the morning session was “May Lakad Kami ni Tatay” because of the creativity of the readers. “I had fun listening to the story because it was told in an energetic manner,” the Grade 6 pupil added.

Her teacher companion and librarian, Carolina Ocampo, said the school conducted storytelling activities to revive the interest of children in reading.

“We also join activities like this read-along session to expose our pupils to different storytelling styles and meet other children who love to read,” Ocampo said.

The much-awaited finals of the Festival Storytelling Competition will also be held during the last afternoon session. Guyito the dancing mascot will also be at the event.–With reports from Kate Pedroso, Marielle Medina and Rafael Antonio, Inquire Research; and Maricar Brizuela, Inquirer Metro