Imagination is escape in ‘The Maids’ and ‘Dani Girl’ | Lifestyle.INQ ❮ ❯ 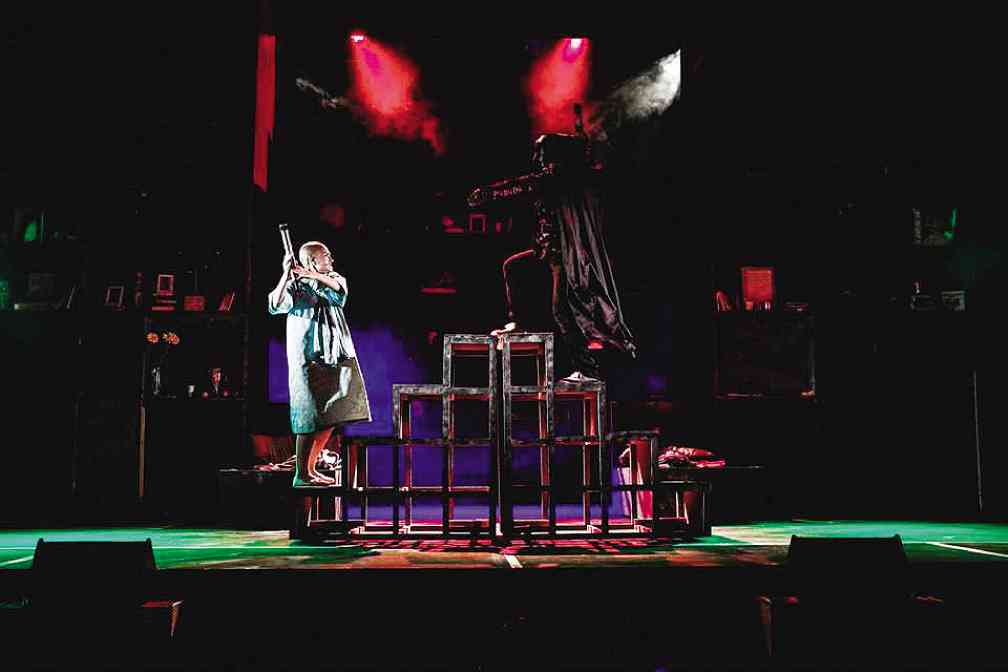 Imagination is escape in ‘The Maids’ and ‘Dani Girl’

Sisters gone cuckoo and a pair of cancer-stricken kids were the unlikely stars of the two stage productions that played the Peta Theater Center’s Main Theater, during The Sandbox Collective’s multi-arts festival “The Imaginarium,” which ran Oct. 28-31.

For these two shows—the returning “The Maids” (by MusicArtes Inc.) and a revamped “Dani Girl” (by Sandbox)—it’s not “all the world’s a stage,” but the stage as a portal to worlds far wilder and more volatile than the ones their protagonists live in.

That stage, by the way, housed Faust Peneyra’s library of a set, with shelf upon shelf of memorabilia from the different productions that took part in the festival. (It all made for a rather fun preshow ritual to spot the items, from a toy giraffe to a unicorn to a parasol.)

The physical and earthly hardly mattered for “The Maids” and “Dani Girl,” though. What these shows set out to illustrate—and each did quite splendidly—was that imagination is a far greater tool than any other within human reach, especially in the face of an immutable end.

In French playwright Jean Genet’s “The Maids,” the titular sisters Claire and Solange spend their days fancifully scheming to kill their employer, the unnamed Madam. When their boss is away, they engage in an elaborate role-playing game, where one of them pretends to be Madam while the other is the lowly housemaid.

We’re not just talking dress-up, though that expectedly transpired on a set littered with seven flower vases, a kimono and a wedding gown. These sisters apparently take their pretend-play very seriously; there’s slapping, spitting, beating, even asphyxiation.

But the fun hurtles to a halt one night when Madam’s husband—whom Claire had secretly framed for some crime and thus sent to prison—is released on bail, sending the sisters in a panic spree as they think of ways to tie up loose ends, like poisoning the boss’ tea, for example.

For this MusicArtes production, Topper Fabregas and Anton Juan (also the director) reprised their roles as Claire and Solange, respectively, while Madam was played by Peter Serrano as the love child of Norma Desmond and Helen Sinclair of Woody Allen’s “Bullets Over Broadway”—essentially the biggest, most demented diva there is (with a turban and feathered boa, no less).

The gender bending was in accordance with Genet’s original vision for the play, and oh, what an utter delight it was to watch these men sink their teeth into such meaty, flashy parts.

Fabregas and Juan were nothing short of sublime as they feasted on their roles with rabid intensity, more than rising to the two-tiered challenge of male actors playing women pretending to be other women as they seamlessly maneuvered the shifts in voice, tone, delivery and nuance.

With Serrano, this fabulous three-person cast turned Genet’s play into a full-fledged black comedy, the dark humor and sadomasochistic elements fully fleshed out, the scenes unfurling in a manner that made it difficult for the audience to choose between laughing out loud and feeling frightened.

In their hands, “The Maids” startled and shocked, becoming itself a game of unpredictability, and thus firmly holding the audience’s attention as they waited for the next nasty thing to happen or the next dirty line to be spat out.

Towards the end, Claire says, “We’re playing idiotic games.” We’d known that from the start, of course, but why bother with the idiocy when everyone’s having such crazy fun?

Originally staged at the Carlos P. Romulo Auditorium in RCBC Plaza, Makati City, this pioneering Sandbox production featured a vastly simplified landscape of two rollout beds, some foldable chairs and a pair of wheeled staircases. Which worked out terrifically well in its favor, as the success of this production was basically dependent on the willingness of the audience to open up to its make-believe elements—and to leave their tear ducts freely flowing for the duration of two hours.

“Dani Girl” is about a child with cancer. The crisp writing and exquisite music by the duo of Michael Kooman and Christopher Dimond do not waste a moment sugarcoating that hard fact.

It does its best to make the audience weep, laugh a little, then weep some more. After all, how does one “appropriately” respond to a 9-year-old leukemia patient’s optimistic declaration that, “I’m not dying. I’m going to get my hair back, and everything will be back to normal?”

The titular girl’s imagination conjures spaceships, monsters and visions of heaven in her quest to answer the question, “Why is cancer?” And the tears fall doubly hard, knowing that behind the surface escapism are cold and merciless truths—death and suffering, for example.

What is beautiful and ultimately touching about “Dani Girl” is that it is probably one of the sincerest things ever created about the disease. For this Sandbox production, the stouthearted cast withheld not a shred of honesty as they plumbed the depths of the musical’s ocean of pathos.

The two alternating Danis, Rebecca Coates and Mitzie Lao, were just the most wondrous actresses—and what immaculate voices!—as they effortlessly disappeared beneath the skin of a dying girl. Coates’ Dani was a tad more mature, seemingly more aware of the consequences and more in sync with reality, while Lao perfectly captured the lightness and innocence of the beguiling child.

Luigi Quesada, just a high school student, displayed skill, promise and confidence far beyond his years as Dani’s roommate and eventual friend Marty. Sheila Valderrama-Martinez, as Dani’s mother, turned her few scenes into moments of palpable heartbreak most adults and parents would have fully understood.

But the best part of this “Dani Girl” had to be Reb Atadero, in a shape-shifting performance that’s probably without equal in this or any other year. As Dani’s guardian angel Raph, Atadero had to be everything this girl could possibly imagine—and so he was father and friend, nerdy, lisping student and game show host, cancer personified and even God himself, through the most seamless and effective of transformations.

It just has to be put into writing: His impression of a Latino drug dealer was one for the books. Not everyone can stop a show cold by rapping the names of narcotics.