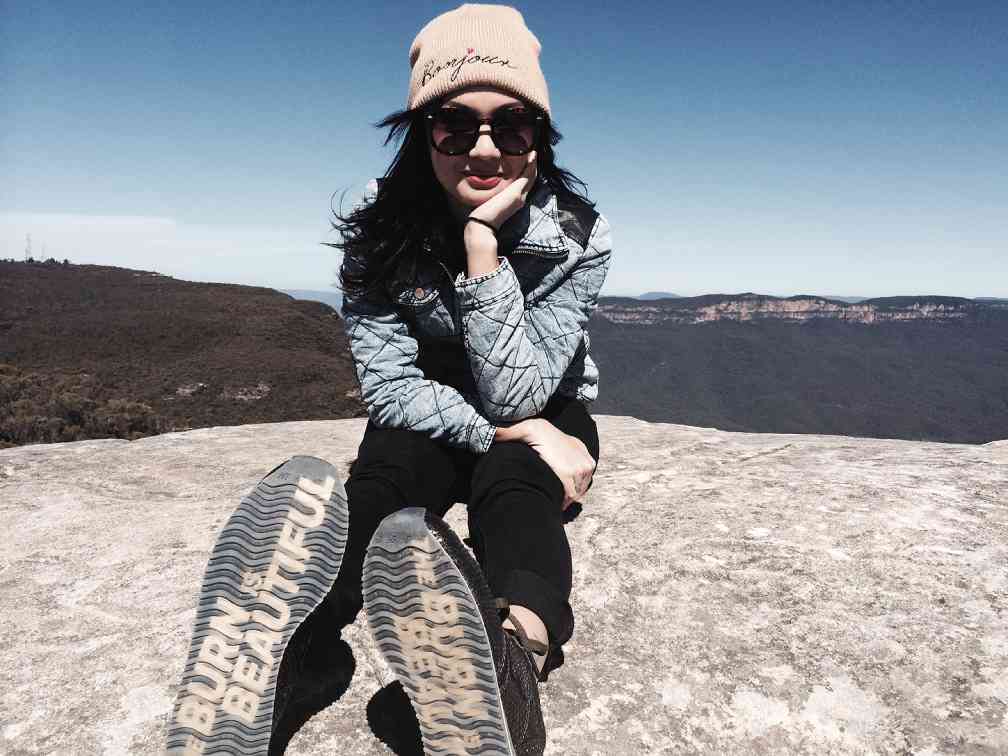 ENJOYING the outdoors at King’s Tableland in the Blue Mountains

My personal treats–or why I love coming home to Sydney

Having lived in Sydney briefly, with half my family still based there, I consider Australia my second home.

I always associate it with family and familiarity, and I go as often as I possibly can.

Going from being a permanent resident to tourist has made it a bit harder to get up and go as I please, because aside from the expensive airfare (almost the same price as going to the United States!), I have to spend time and money on visas as well.

When Cebu Pacific announced its flights to Sydney, I was ecstatic, and even more so when I was invited to join its maiden flight. I was curious to see if a low-cost airline could provide a decent-enough trip on a long-haul flight.

First thing I noticed when I boarded was that there were no divisions. There was no First, Business and Coach class. How refreshing to feel like we were all on the same level.

Second, unlike most airlines, there was Wi-Fi. Those who can’t live without Internet, even for a few hours, will be happy to know they can post airplane selfies from thousands of feet up in the air—for a small fee.

Meals are prepaid and should be preordered, but snacks can be bought on the flight. Seats are a bit tighter than most but fine for eight-hour travel.

There are no free toiletries, but blankets and neck pillows can be purchased in-flight.

Take advantage of flights now that they aren’t too full. Going to Sydney and coming home, I was able to move to an empty row and got to sleep comfortably.

I could barely contain my excitement when we set off on what was, for most of the people  on this trip, the first glance of Sydney. And what better place in the city to fall in love at first sight  with than Darling Harbour?

It is indeed a great tourist attraction, but it also offers a lot of things to do for both tourists and locals.

First stop was Sea Life Sydney Aquarium, a world-class display of over 700 species of aquatic life. The aquarium pumps millions of liters of water from Darling Harbour to use for the aquatic displays.

I had been here several times, but this time around, I was able to get a backstage pass to the inner workings of the aquarium. We were able to experience its rendition of the Great Barrier Reef through a glass bottom boat, and take a not-open-to-the-public tour of its other tanks and get a little face time with other animals.

It’s a great few hours to spend with your kids, but adults enjoy it just as much.

Just a few minutes’ walk down is Madame Tussauds, the famed wax museum that is present in most major cities around the world, and also a good way to spend part of your day. Who doesn’t want a picture with a realistic-looking Brad and Angelina, or Johnny Depp? 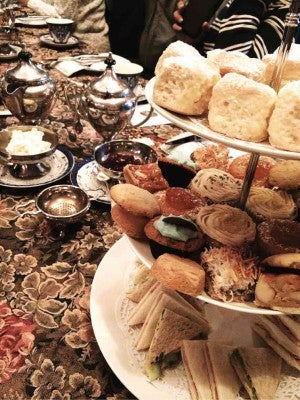 Sydney’s food scene is for everyone; whether you want a fancy restaurant or a hole-in-the-wall type, you’ll find something to suit your taste and budget.

For a nice seafood dinner, go to Nick’s Grill on King Street Wharf and fill yourself with fresh oysters, crispy fish and chips, prawns, and other dishes while enjoying a glass or two of wine. It’s a pretty romantic spot as your view is Darling Harbour.

For a 360-degree view of the city, you can try Sydney Tower Restaurant. It also offers an extensive buffet that includes our very own adobo.

While Sydney can be an expensive city, all it takes is a little research to find cheap eats that will satisfy your palate.

One of my favorite places is Gumshara Ramen, hidden in the very back of this Chinatown food court called Eating World. It serves the best ramen broth ever, using double the amount of pork bones and collagen to thicken its soup.

A few blocks away, on Sussex Street, is the Home Thai Restaurant, a crowded and busy authentic Thai restaurant with good food and reasonable prices. Be prepared to line up if you don’t get there early as it doesn’t take reservations.

Lastly, if you are willing to venture outside of the city and take the train, about 25 minutes away, there is El Jannah, the legendary Lebanese charcoal chicken served with chips and house-made toum, an addicting garlic sauce you will want to spread all over everything you eat.

For a few happy-hour drinks, you can head over to Opera Bar, right below the Sydney Opera House. You can’t go wrong with a view of both the Opera House and the Harbour Bridge while enjoying a glass of Chardonnay.

For a fun night out with hip-hop-inspired décor and cocktails, and a DJ on weekends, head over to Hustle & Flow in Redfern, just a stone’s throw away from the city, and experience rubbing elbows with the locals.

Aussies are known to love the outdoors. Except on Thursdays, shops close at 5 p.m. to give people an opportunity for work-life balance.

Also, I have seen more than a few cars with surfboards attached to them heading over to the beaches on a Friday afternoon after work. It’s no wonder that two of the most famous landmarks, Darling Harbour and Circular Quay, are outdoors as well.

Within the city, you can explore The Rocks, where you can discover more about Australia’s history, and grab a few trinkets and souvenirs if you head over on a Sunday.

You can also get to know Aussie wildlife on a trip to Taronga Zoo, which you can get to in 40 minutes by car or 20 minutes on the ferry from Circular Quay. If you can, try to get a behind-the-scenes tour and actually pet echidnas, kangaroos and an adorable quokka named Autumn.

Trivia: It’s been said that Taronga Zoo is prime real estate, and the animals there, giraffes in particular, actually get the best view in the whole city of the annual New Year’s Eve (NYE) fireworks display. Lucky them!

If you like to see a little bit of what they see, you can book to be at Taronga for NYE, but do it quickly because all the good spots go really fast.

Another one for those who  want to do something extreme is a tour on the Sydney Tall Ships, for a lunch cruise.

The crew sails about two hours and serves lunch buffet-style, as well as pass-around appetizers and an optional open bar. Sounds standard enough until it offers you the chance to climb the mast.

It is definitely an experience to climb a ship’s mast while it is running and swaying from side to side.

The first few steps up are very scary, and then you just learn not to keep looking down. Don’t forget to stand up when you reach the top and enjoy the view.

If you want to venture a little further out, a day or overnight trip to the Blue Mountains is in order.

Here you can visit Scenic World, which shows great views of the most popular sites in the Blue Mountains, one being the Three Sisters, and Australia’s coal mining history.

You can walk through the rainforest where miners used to work and live, and learn more about the country’s flora and fauna.

Ride the cable way to see the Three Sisters, Orphan Rock, Katoomba Falls and Mt. Solitary.
If you’re a little peckish after, head over to the Carrington Hotel for lunch or dinner. This grand-looking hotel has been around since the 1800s and is a favorite of international VIPs, including Queen Elizabeth during her younger years.

Don’t miss out on the post-meal Hot Chocolate, said to be the best in town.

The Blue Mountains is a quaint artist town, and you will feel immediately how different it is from the bustling life in Sydney.

In the main town of Katoomba, you will see streets lined with cute little cafés and boutiques, a lot of which are manned by the owners themselves. It’s a refreshing change from big malls and chain stores, and one can spend a whole day exploring and checking out one-of-a-kind pieces and unique knickknacks.

One must not miss Bygone Beautys, a teapot museum and store-cum-café in Leura, which houses the largest collection of teapots in the world. We had the chance to have afternoon tea there, with house-made scones, pastries and tea sandwiches.

The owner, Maurice Cooper, also known as The Teapot Man, joined us, happily talking about his insatiable habit of collecting tea sets.

Also visit Josophan’s, a chocolatier in Leura that has won so many awards in the annual Royal Easter Show that now it can only exhibit and no longer needs to join the  contest.

It makes chocolate with natural ingredients and has unique flavors such as its best-selling lime and basil. Its cappuccino is actually shaped like a coffee cup with foam.

My favorites are the peanut butter cup, its take on the popular Reese’s, and the dairy-free chocolate with praline.

Australia is known for its beautiful and accessible beaches, so a first-timer should not miss heading over to the world famous Bondi beach.

But why stop there? Get your walking shoes on and do the three-hour-long Bondi-Coogee coastal walk, and see a few other lesser-known but equally lovely beaches along the way.

My sister and I love stopping at Jenny’s Café in Bronte for a snack and a quick swim before moving along from this halfway point.

Another option is to take the ferry from Circular Quay to Manly, for not just a fantastic beach, but also a nice boardwalk with shops and cafés.