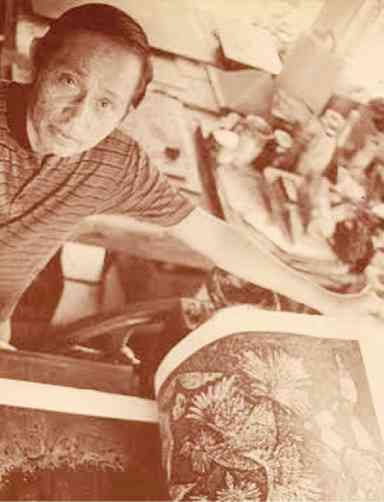 MANUEL Rodriguez Sr. in his printmaking studio in the 1950s

Philippine art was a lively force that swept through Manila in the 1950s. With isolated studios like the hidden gems of a city, it was a time of discovery, excitement and self-expression.

One of the intriguing places I used to visit was a secluded little studio across from the San Andres market. It was home and workshop to Manuel Rodriguez Sr., a lean, self-effacing printmaker who smiled even as he spoke.
He always wore a large katcha apron dripping with black ink, making it look like a fake Jackson Pollock. Yet it was such a part of his attire that I never quite imagined him without it.

Once on a cool November morning, he spoke to me of his passion for printmaking, how he reflected on it by night and worked on it by day, never ceasing, never thinking beyond the grandeur of his imagination.

Then in a swift movement of eagerness, he lifted a sheet of Manila paper and uncovered the most lyrical Christmas cards I had ever seen. Finely engraved on the smoothest paper, each was a signed original. I was in awe.

The concept was novel and daring, for until then, our Christmas cards depicted Santa Claus, fireplaces, fir trees and snow. Rodriguez featured Filipino scenes in varying tones of sepia—a church plaza during Misa de Gallo, carolers in native costumes, stalls with puto bumbong, faroles hanging from nipa huts and kalesas under a sky of lanterns. Enchanting works of art.

But Mang Maning was stumped. Who would buy his cards? He had no idea about marketing them, or how to approach Philippine Education Co.—the only major bookstore then—or anyone for that matter.

“I’ll do it!” I said, surprised by my own reaction. At 16, I had no idea either. Yet when his eyes lit up, I felt the wind of hope and knew that it could be done.

“How will you show them?” he asked.

“Maybe we should make a scrapbook,” I said.

Swept by enthusiasm, he quickly rummaged through piles of textured paper and created a little book. Then he pasted each sample with astonishing precision, making sure the edges were neat and straight. When he finished, he smiled with an easy serenity. The cards looked exceptional.

Next we had to decide on the price.

“What about 20 centavos each, which is the cost of two Coca Colas?” I suggested.

“Okay lang,” he agreed. “And you can have two centavos per card.”

This was unexpected. But it was my first business venture, and I was thrilled.

When my mother saw the scrapbook, she embraced it with delight and became our buena mano. I talked to people I knew and to anyone who would listen.
With the excitement of a dare, I went to see I.P. Soliongco, a strident nationalist and columnist, and an editorial writer of The Manila Chronicle. He saw the radical context right away, and gave it prominence in the Sunday edition of his paper.

Everyone was in high spirits knowing that here was something important. In a rush of national pride, Manuel Rodriguez was news!

By the time we sold the impressive number of  100 cards, Mang Maning was so overcome that tears rolled down his cheeks. He was incredulous that his work was being received so splendidly.

“Nagustuhan nila ano,” he said in quiet disbelief. I nodded silently. I recognized the strength of the trend he had started, and was deeply moved to be part of it.

In the fruitful years that followed, Rodriguez became the leading figure in the art of printmaking. He taught a generation of printmakers and opened the Contemporary Arts Gallery to exhibit their works.
The first Filipino artist to show his prints in an international biennial exhibition, he obtained a scholarship from the Rockefeller Foundation and received prestigious government awards, including the Patnubay ng Sining at Kalinangan from the City of Manila.

Today, Filipino Christmas cards are all over the world. Rodriguez himself left the country in 1970 to revel in that larger world, designing with the same sense of wonder as the days of his youth. He lived for four prolific decades in New York, and recently retired in the Bahamas.

Honored as the Father of Contemporary Philippine Printmaking, he spoke on the occasion of his hundredth birthday on January 1, 2012: “I have to fulfill something, but I still don’t know what it is. I think I will just continue working, and I will know when it is time to go.”