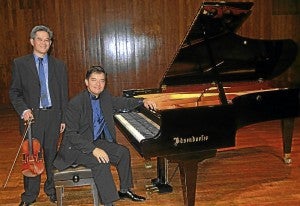 Believe it or not, Los Baños   is just an hour  (and 63 km) away from the Makati  superhighway exit. With its still lush vegetation, this university town  is a most welcome respite from the pollution of Metro Manila.

This is where the fabled Mt. Makiling is, with its 2,000 species of flora and fauna.  This mountain is the home of the Philippine High School for the Arts, where cellist Victor Michael Coo, pianists Rowena Arrieta (first Filipino prizewinner at Moscow’s Tchaikovsky Competition), Albert Tiu, Oliver Salonga, Victor Asuncion and Jonathan Coo took their secondary schooling.

Dame Margot Fontaine and pianist Van Cliburn  once visited this school during its inauguration where pianist Cecile Licad and violinist Carmencita Lozada played a Caesar Franck sonata in the late ’70s.

On my last two visits by bus,  I rediscovered the Umali Hall on the UP Los Baños campus. It seats over 500 people, has two grand pianos, and the acoustics is not bad. I don’t know if this is the same theater where  Arrieta had a well-received recital in the mid-’80s.

There is a little-known theater within the Trace College identified with  Mayor  Anthony Genuino. Its Teatro Genuino is comparable to the CCP Little Theater and Philamlife Theater, and it has what looks like a brand-new Kawai baby grand piano.

Hotel suites are within the compound, which makes it perfect for visiting international artists.

Classical music in Los Baños  is not a regular treat. “We have  more  theater events than music,” says Thea Torralba, who studies at UPLB.

This year, Dalcielo (“heaven-sent”) Restaurant and Bakeshop along Lopez Avenue decided to  observe its first anniversary by giving the town a special music treat by way of a concert at the UP Los Baños Umali Hall, featuring violinist Joseph Esmilla and pianist Rudolf Golez, on Saturday, Oct. 15.

The owner, Marissa de Jesus in the company of  Rey Araos and Pinky Halos, watched the concert of  tenor Lemuel de la Cruz at Kiss the Cook Gourmet in Quezon City early this year, and the cheering dining crowd gave them an idea that they will observe their first year in Los Baños with a concert.

With jazz chanteuse Jacqui Magno, writer Babeth Lolarga, PDI columnist Mandy Navasero, I sampled Dalcielo’s cuisine and realized it had nothing to fear from the most discriminating food critic.

Its SpinArt Dip with garlic bread is the kind you’d love while listening to Debussy’s “Claire de Lune.” Its Pako (fern) Salad is worthy of  Eric Satie, and its Callos a la Madrileña and Lengua con Setas could entice Placido Domingo and José Carreras to relocate  in Los Baños.

Soprano Anna Netrevko  would throw dietary caution to the wind if she samples Dalcielo’s desserts, namely the  Strawberry Cheesecake, the Ube Banana Cream Pie, and the Tiramiso.

When  Dalcielo presents Esmilla and Golez at Umali Hall on Oct. 15, you will discover Los Baños is not just where you  will enjoy the hot springs and the roadside buko pie: It is also an alternative place to enjoy the music of  Liszt, Kreisler and Strauss.

After their Oct. 15 Los Baños concert, Esmilla and Golez will be heard at the Balay Kalinaw in UP Diliman campus on Friday, Oct.  21.