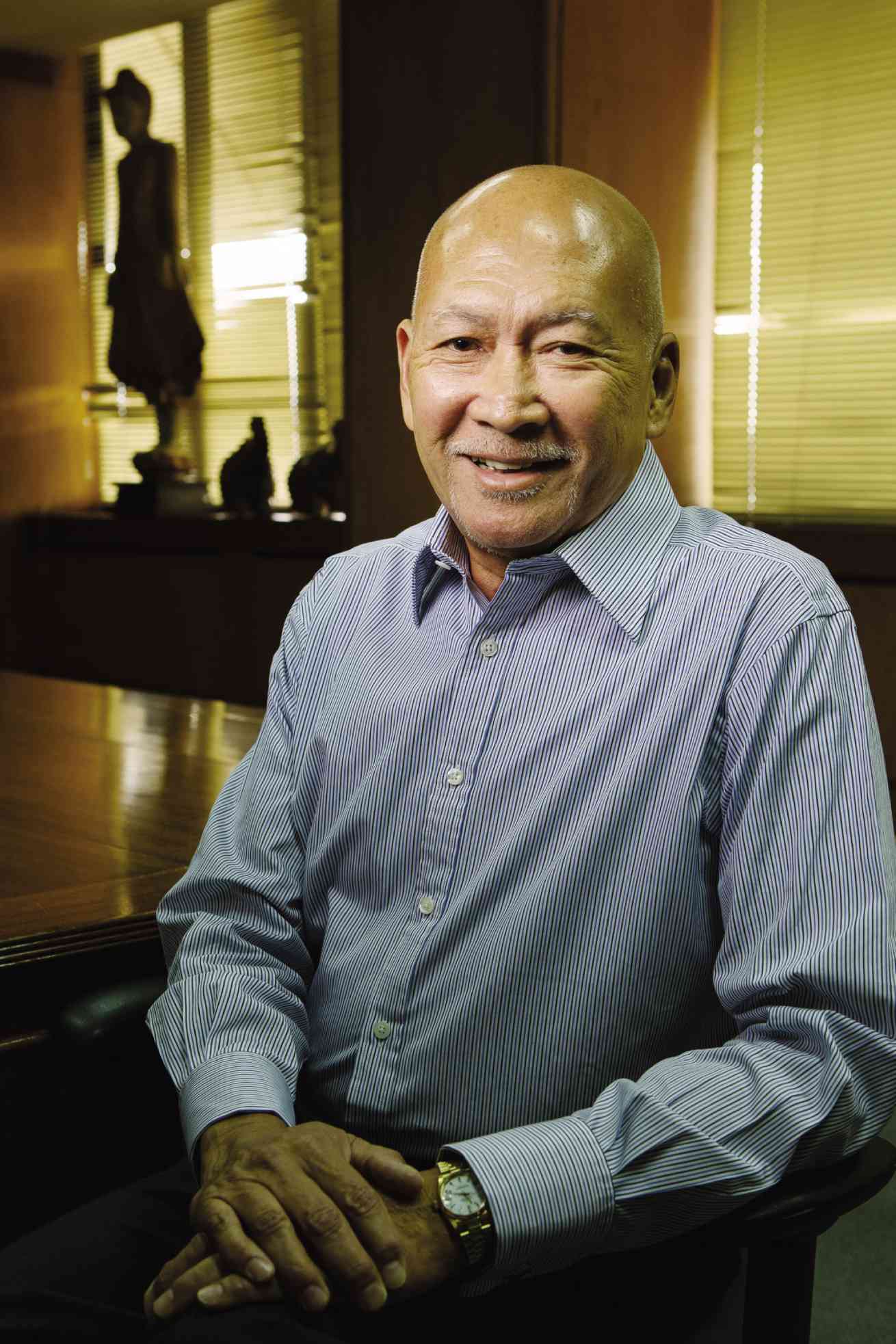 ESCALER walks the talk of the Ateneo motto, “To be aman for others

The edifice is massive, yet the floors seem like floating volumes that welcome the sunlight and cool air, the seeming trademarks of his friend, the National Artist for Architecture, the late Leandro Locsin.

Asked if the building was designed by the late architecture icon, Escaler says yes, “Doesn’t it remind you of the CCP?”

He is referring to Locsin’s obra, the Cultural Center of the Philippines, which shows the architect’s mastery of scale and proportion.

When he’s not in Rome, his “home away from home,” the 64-year-old businessman holds office at Escaler and Co., the holding firm of the Philippine Interactive Audiotext Services, Inc, (PIASI) and Gourmet Farms.  For more than two decades now, Escaler’s businesses have maintained community engagement, particularly with the arts and religious circles.

In appreciation for his generosity of spirit and recognition of his enterprise, the President of Italy has conferred on Escaler the Order of the Star of Italy (Ufficiale nell’Ordine Della Stella d’Italia), given to expatriates and foreigners who have contributed to Italy’s development.

The first Filipino to get this award is self-effacing. “I play golf, and I’ve managed sports teams. The victory  from preparing for a championship is different. To get an award you didn’t even aspire for is very humbling,” he says.

Escaler was one of the country’s pioneers in business process outsourcing (BPO)  in 1994.

“We stopped the queues on Roxas Boulevard when we started with the US Embassy,” says Escaler. The embassy clients’ list initially included Canada and Australia.

Eventually, these countries have turned to global outsourcing. PIASI provides a host of services to the embassies of  Japan, New Zealand, Schengen,  Belgium, France, United Arab Emirates and Italy.

His father, industrialist Ernesto Sr., founded Phinma Group and Bacnotan Consolidated Industries and taught law at Ateneo and Assumption. His mother Luisa de Leon comes from one of Pampanga’s most affluent families, whose fortunes were derived from  real estate, insurance and banking.

Escaler’s economics degree from Ateneo and  MBA from the International Management Institute in Lausanne, Switzerland, enabled him to get a job as a commodities trader in New York.

Then he was asked to come home to establish Bancom Commodities Services under the Bancom Group. When the company folded up, he went on his own with his management consultancy, Escaler and Co.

Escaler also inherited positions from his father’s businesses such as Wayfair Tours Inc, which was  originally formed by his father, tycoons Enrique Zobel and Consuelo Madrigal Collantes and Rene del Rosario. The tour operator introduced Alitalia, Italy’s flag carrier, to the Philippines.

He began with coffee trading in 1975, when he represented an American company. Escaler then introduced Philippine coffee, Gourmet Coffee, to the global market in 1978.

Escaler acquired a huge tract of land in Silang, Cavite, in 1982 which started out as an orchid farm. Escaler was inspired by California cuisine, and in 1986, ventured into organic farming.

The Gourmet Farms (GF) was one of the first to advocate a holistic system of food production that was attuned to the environment.

Back then, GF’s new varieties of lettuces seemed esoteric to Filipinos. “I was forced to put up a restaurant, the Gourmet Café, so that people would have a venue to try the organically grown produce and coffee,” he recalls.

Gourmet Café started out as a quaint log cabin which served as a stop for travelers to or from Batangas. The two-hectare farm has since expanded to 11.5 hectares, to include coffee roasting facilities, a store,  restaurant and accommodations.

Escaler dreams of franchising his brand.  The Gourmet Farms stall at the Globe Telecom office  is said to be the highest-grossing outlet there.

“We offer salads, wraps and other healthy alternatives to fast-foods. That’s my passion,” he says.

At the heart of Gourmet Farms is The Sanctuary, which was built with retreat facilities and spaces for silence.

“This is my payback project. It allows people to hopefully communicate with their Creator on a personal level,” says Escaler.

His technology-driven business, PIASI, is equally impressive. PIASI installed the optic cables and closed circuit television in MRT stations, and provides software programs for data base management for the Department of Environment and Natural Resources and the Philippine Coast Guard, to name a few.

His leadership is based on delegation. “Why do I hire key people? I hand over responsibilities to the people who work for me.”

Has he ever been deceived in business?     “Yes, but on the balance, I’m way ahead. I believe in karma. Recently we had a major mutiny in our IT department.  People got very ambitious. They thought they could do things on their own. They didn’t realize that PIASI has a tradition and a track record. This business is not something you can start right away.

“When there’s a P10-million consultancy contract on software from a government agency, the client wants to see the track record. After a few months, we found replacements, and we are getting new contracts because of our reputation,” he explains.

A movie buff—he has over 4,000 movies in his library—Escaler turned his   love of  film into a business with an independent film company, Ten17P Productions Inc, run by filmmaker Paul Soriano.

Not all his ventures succeed, though. “If it fails, do something else. I’ve gone into so many things that have flopped.  You just forget about them and move forward.”

Escaler swears that he will never invest in a Broadway show again.

In 2001,  the executive director of the Los Angeles Music Center invited him to watch “The Flower Drum Song” at the Mark Taper Forum.  Lea Salonga led the cast, most of whom were Filipinos.

Its critical and commercial success drove the producers to bring it to Broadway.  Escaler was invited to be a backer, and he  asked friends put in  money.

The  musical revival opened in October 2002 to a near-capacity audience.

But with the negative reviews and the severe winter,  audience attendance  plunged. “The rule in Broadway is to maintain 65 to 75 percent audience share. When you fall in that week, you are automatically put on notice, the next show is booked. There was a week  we failed to meet that quota. People couldn’t come because of the weather,” recounts Escaler.

“Flower Drum Song” closed in March 2003 after 169 shows. All the investors lost their outlay.

Escaler recalls that before  Ten17P, there were other film productions that never saw the light of day. “You try to help. But once they get on their feet, they run away. That’s life,” he waxes philosophically.

His support for the arts  is unconditional. For 28 years now, Escaler has been on the board of Ballet Philippines.  Locsin,  a founding member of  BP board of trustees, invited Escaler to replace Jaime Ongpin, who had left to join Corazon Aquino’s Cabinet.

Aside from helping with the fundraising, Escaler would host foreign guest artists such as Cynthia Harvey and Julio Bocca in his residence.

“I appreciate what these dancers go through. They need help. After all, we have something this country can be proud of. We are our own worst enemies. All you read in the news is graft and corruption. It’s all negativity. We speak badly about ourselves. What’s a better way to promote the country than through the arts?” says Escaler.

He is also the founding chairman of the Asian Cultural Council, a non-profit organization that provides grants to Asian artists on exchange programs in the United States.

Escaler admits that organizations do get donor fatigue. “As much as possible, we just try to do things on our own and stop asking from other people.

“That is why I’m more driven. History is reflected in the arts, yet not so many people are into it. Even after 1986, people consider Imelda Marcos the No. 1 patroness of the arts despite corruption charges and  People Power. Nobody has equalled her,” says Escaler.

“The arts are important. They reflect the nation, and where it’s going. It nourishes the life of a country.”

As if all this weren’t enough, he and some Ateneo alumni established the St. Aloysius  Gonzaga Foundation, which supports seminarians.  It was a birthday wish of former Ateneo high school principal Fr. Luis Candelaria when he turned 80.

Escaler believes in keeping his palm open. “It comes back so I can help more people.”