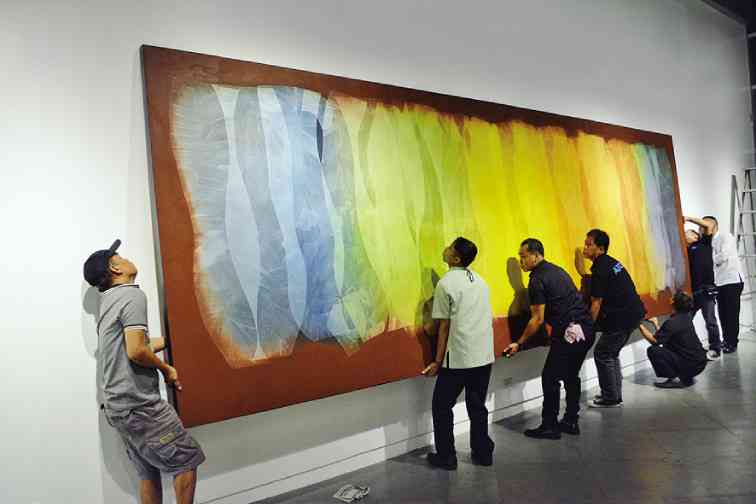 THE PAINTING being installed in ArtistSpace, Ayala Museum

Echoing a sense of personal history, Olazo’s latest panoramic painting continues the large-scale format the artist has worked on from the early and seminal stages of his artistic career, notably a silkscreen mural in 1981 which spanned 50 feet, occupying the Museum Hallway of the Cultural Center of the Philippines; and then a pair of gigantic murals commissioned for the Pacific Star Building in Makati in 1989.

In these projects, Olazo recognized the potential of the spaces given. The same is true with the current exhibition.

For Olazo, it is an intuitive response to the gallery’s physical space and context that coaxed the mural, a project initiated and organized by Paseo Gallery.

Critic Cid Reyes writes of the monumental work: “While it deploys all the trademarks of past ‘Diaphanous’ works, the thrust of the shape of imagery this time is tantalizingly humanistic. What registers in the eye is the undulation of sinuous shapes, wiggling as they emerge through a sweeping gradation of tones across the canvas surface. The softened curvilinear forms, with their concave and convex alternation, offer irresistibly rich analogues to visages, breasts, torsos, arms, and extremities.”

Given to the numeric system of titling and cataloging his work, “Diaphanous B-CCXXXV” comes in as the latest of Olazo’s works, a much-awaited output, as it is the artist’s 80th birth year.

Capping a festive season which saw the launching of Olazo’s comprehensive book as one of the highlights, it is the largest work the artist has produced. It features stylistic flourishes that only an artist’s senior season can muster: that which features something collected and optimistic, mature and calm in its simplicity and yet seizing complexity. It is Olazo in one of his best and finest.