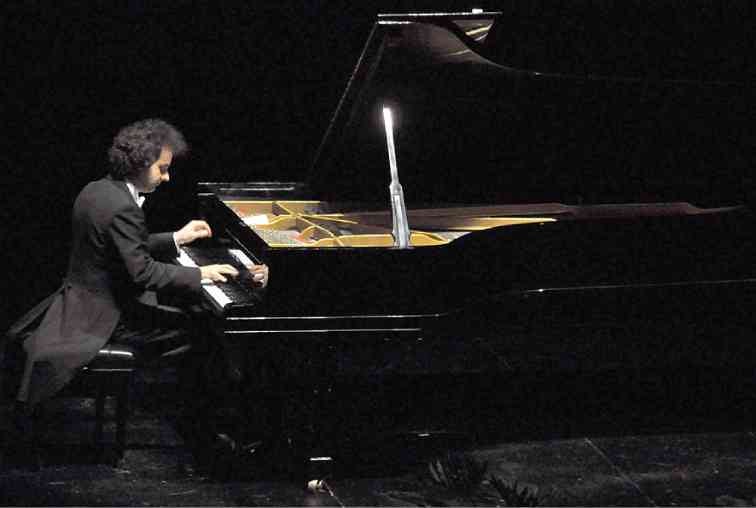 Italian pianist Christian Leotta made an auspicious Philippine debut in an evening of Bach, Schubert, Rossini and Beethoven last Nov. 11 at the Little Theater of the Cultural Center of the Philippines.

For the first time (at least, for this concertgoer), one saw an image of the pianist being magnified on the screen behind him. For this reason, there was no need to buy good seats for the recital. One could see the pianist’s hands on the screen anywhere one was seated.

Leotta is the kind of pianist who lets the music speak for itself.

A sense of fascinating detachment characterized his opening number, Bach’s “Capriccio on the Departure of his Beloved Brother BWV 992.” One could sense instinctive control; the lines were clearly drawn and it wasn’t difficult to see why it was a challenging recital piece. Leotta had the same focus and execution in Schubert’s Piano Sonata in A Minor, clearly drawing the aural contrasts.

Leotta endowed the Bach and Schubert pieces with sublime and distilled longing.

Rossini, who’s known more for his opera, figured in two short piano pieces, “Memento Homo” and “Une Caresse a ma Femme.” The well-carved interpretation was much appreciated, but it also showed that the composer belonged to opera than to piano literature.

Drama and urgency figured prominently in Beethoven’s Piano Sonata No. 23 in F Minor, Op. 57 (“Appassionata”). There was an onrush of pianistic power in the finale and the once detached stance of the pianist gave way to his virtuosic side.

The pianist noted that the program charted the evolution of compositions written for the piano from Bach to Schubert to Beethoven to Rossini. For him, their pieces were intertwined.

“Beethoven developed by studying Bach as his foremost model of musical counterpoint,” said Leotta. “Schubert considered Beethoven the greatest composer of all times; the same esteem was shared by Rossini, a testimony of shared ideals held by great icons of music history. They gave so much to mankind through their works.”

A day before the recital, the pianist gave an interview with this writer at the Rustan’s board room in Makati.

Asked how he could wield magic over his audiences by interpreting Beethoven sonatas, he said there were no special formulas except to focus on three things: practice, practice and more practice.

“A pianist is a product of the many things that shaped him—his teacher, his talent, and his ability to absorb the styles of the composers according to their intent,” he said.

Leotta is now recognized for being the youngest pianist since Daniel Barenboim to perform and record all 32 Beethoven piano sonatas.

Asked how he got to be known as a distinguished Beethoven interpreter, Leotta surmised it could be the influence of his teachers, one of whom was Karl Ulrich Schnabel, son of legendary pianist Artur Schnabel, an acknowledged Beethoven specialist.

It is common knowledge among piano pedagogues that the young Schnabel’s passion for teaching led him to theorize extensively about how to achieve the correct relationship between piano technique and musical expression—the former “was always to remain in the service of the spirit of the music.”

Leotta added he also studied with another piano legend, Leon Fleisher, who he said had connections with Beethoven.

“Mr. Fleisher was the youngest student ever of the great Artur Schnabel, who studied with keyboard giant and pedagogue Theodor Leschetizky, a pupil of Carl Czerny, who in turn studied with Ludwig van Beethoven, he said.

“How they play Beethoven is also my idea of how this famous composer should be interpreted. I can’t define it, but interpreting Beethoven needs a special attention to the way you should produce the sound and how to sustain it and make something magical out of it. You discover that special something by constant practice.”

A Luxemburg critic hailed Leotta as “one of the major Beethoven soloists of our time.”

In Canada, another critic noted “his prodigious technique used to better express the poetry of Beethoven’s music.”

After Leotta’s recital of 32 Beethoven sonatas in Montreal, a critic wrote he was “a pianist of the highest order: technician, musician and interpreter all at once.”

Leotta said he was lucky to study with the son Artur Schnabel, whose performances of Beethoven compositions had been hailed as models of interpretative penetration. Schnabel’s best-known recordings are the Beethoven piano sonatas.

The Italian pianist said he was not too fond of films based on composers’ lives. “I like ‘Amadeus’ but I find ‘Immortal Beloved’ based on Beethoven’s life quite silly.”

Leotta’s Manila recital was made possible by the Italian Embassy through Ambassador Massimo Roscigno and the Philippine-Italian Association headed by Nedy R. Tantoco.

CCP president Raul Sunico gave the audience an overview of the cultural ties between the Philippines and Italy during his welcome remarks.