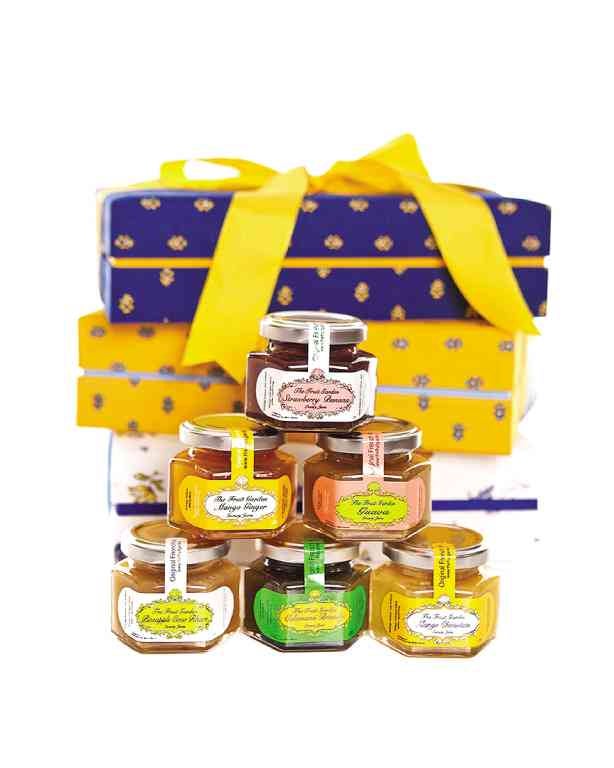 Recently we were virtually transported to Provence, a southeastern region in France, with the introduction of a new line of The Fruit Garden Luxury Jam.

I first interviewed the company’s proprietors, Pierre and Ria Marmonier, in 2009; back then I had been amazed that their jams, which were available at a local deli and whose packaging looked imported, were actually made in the Philippines.

Since then, the couple had come up with new product lines. The recent ones were most impressive.

At the launch of these products, Pierre’s mention of Provence as his hometown conjured romantic images of sunny, pastel-colored vistas—a place I had known about only in books by Peter Mayle, and in films such as “My Father’s Glory” and “My Mother’s Castle,” both directed by Yves Robert.

For the jams, Pierre used Provençal fruits and herbs—apricots, peaches and thyme. The combinations include apricot lavender and peach thyme. But he also added the sweet-smelling perfume line of Strawberry Rose as a tribute to Grasse, a town known as the world’s capital of perfume.

Yet the Marmonier couple wanted guests to know more than just about their jams. So they included a bit about Provence’s fabrics, which they used in the gift boxes, and about the tradition of carving little saints called santon.

Indiennes was the name of the printed fabric imported from India when these were first shipped into France in the 17th century. Ria said there was a ban on both the importation and production of the fabric because it contributed to the death of the silk and wool industry of France at the time, but the ban was lifted soon after.

When the fabrics reached Provence, the locals adapted those designs to their preferred colors and patterns—purple lavender, green olives and yellow sunflowers or lemons. Up to now there is a manufacturer in Provence who does the fabric in the style of the indiennes.

The santon was displayed at the launch, little carvings that when put together form a crèche, a Nativity scene much like our belen. Another artisan product of Provence, the sculptures sometimes also depict Provençal life. This traditional art form started in the 17th century, but during the French Revolution in the 18th century, churches were closed and santon makers were prohibited from producing their “little saints” (which is what santon means).

When santon-making was allowed again, one man from Marseilles decided to make molds of the santon and sold the figures at a cheaper price. Today, there are santon fairs all over Provence.

Helping us absorb all that information was the food served at Chef Marc Aubry’s Champetre at The Fort. Aubry made sure his cocktail offerings used the jams, both the new ones and those the Marmoniers started with.

The standard jams included mango ginger in the prawn tartlets, the orange marmalade that accompanied the patés and rillettes, and the calamansi jam mixed into the vinaigrette for the salad of calamares and clam.

The new line includes Fairy Blush, a mix of berries and spices, which was made as a dip for the baked glazed ham served on toast. Coconut macaroons were filled with Sunshine Medley, the apricot-lavender jam. Homemade ice cream was topped with either peach thyme, strawberry rose or Sunshine Medley.

In keeping with the Provence atmosphere, a rosé (Côte de Provence 2011, Lou Romanin) was served, keeping the conversation lively that evening. And as the cocktail evening stretched on, it was a red that made the rounds (Côte du Vivarais 2011, Vignerons Ardechois).

That festive mood is what the new line and packaging of The Fruit Garden convey—perfect for gifts this coming holiday season. You don’t even need Christmas wrappers, because the indiennes patterns are even better. Tie it into a bow to seal the surprise inside.