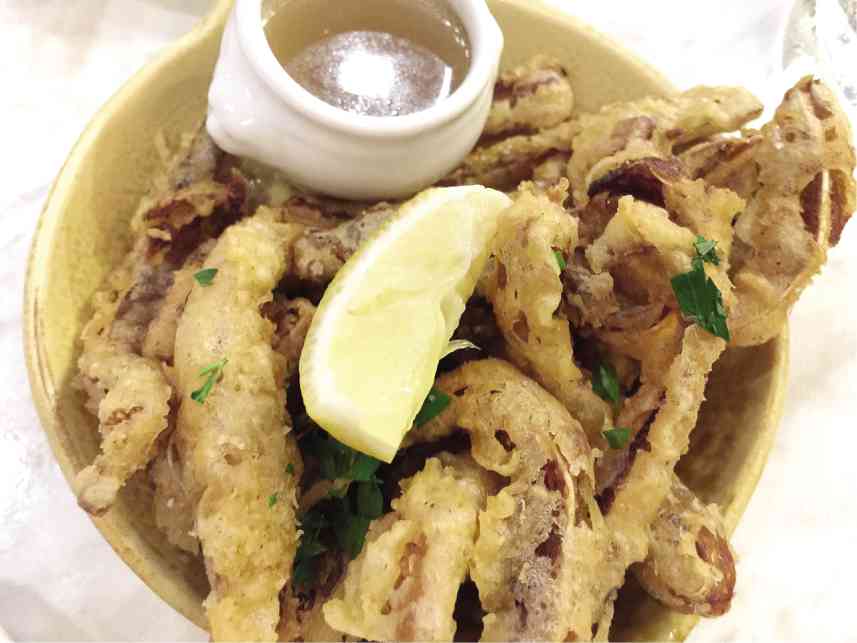 New restaurant is small in scale but big on eclectic charm

A recent visit to the cardiologist has redirected my everyday diet into the contentment of ritual virtue: grilled fish, fresh vegetables and only water to drink. I became more alert, like a goldfish in a tank of murky water that had been replaced after a month. This state of Zen-like righteousness lasted for about a week, when I realized, staring out through the newly crystalline water, that I felt, well, rather like a goldfish. Life was not worth living without fat.

This dispatch comes to you amid a slick of lipidinous haze, after indulging in a dinner of fried strips of battered pig’s ear (I mean the strips of pork were dipped in batter; the pig, I hope, suffered no physical abuse).

This was followed by French onion soup, and then a pig’s leg, also deep-fried, served with a rich mustard sauce and preserved cabbage.

My right temple is throbbing and I have lost hearing in one ear, but this is nothing that a good digestif can’t fix.

The last time, incidentally, that I ate French onion soup followed by a pork trotter was at a brasserie in France, and it was terrible. The soup was brown stodge with yellow rubber on top; while the pork leg oozed lard and cooking oil as I tried to saw through the leathery crackling with a knife, then a sharper knife, then, finally, my teeth.

The death of the brasserie is one of the most lamentable damages of the current recession on France, because they were wonderful places: brash, garlanded palaces of great social theater.

CDP, the new restaurant on the exterior side of Rockwell’s Power Plant Mall, has some of the trappings of a brasserie: a dramatic bar, ornate candelabra, and what almost looks like a pressed tin ceiling that could have come from Montparnasse. It’s a tribute to the excellent interior design of the place that it doesn’t overwhelm, but makes the space look bigger. Because it really is a very, very tiny space.

Wedged into the tiny gap between Mamou and Kuretake, it feels like an extension of Mamou, which in a way it is. Malou Fores is one of the partners; the others are Kristine del Gallego (formerly of Lu), and Katrina Alcantara (of Mesclun, a restaurant that never did get the chance to come into its own).

One might reasonably wonder, given that three disparate personalities are involved, whether the menu would be a disjointed mashup of cooking styles and influences. To a certain extent, this is true, but it comes off as eclectic rather than muddled.

I’ve eaten at all three of their previous restaurants and can guess who is responsible for what: Malou for the steaks, given her expertise in the area at the Balthazar-inspired (another great brasserie that happens to be located in New York) restaurant next door; the small plates of intense Mediterranean flavors such as the black stew of baby squid in ink are in the style of Lu; while the neglected and lamented Provençal-style dishes like bagna cauda, vegetables with an anchovy dip, hark to Mesclun.

Although the menu managed to be a coherent selection of dishes to choose from, one problem I’ve encountered is the modulation in size. Some things come very, very large, while others are dainty bites. There is no advance warning as to what you’re going to get, unless you ask the waiter beforehand.

This doesn’t present that much of a problem if you’re sharing, but if individuals at the same table are getting separate meals, you might find yourself with too much on your plate.

Actually, whatever you get, you will have too much on your plate, because the plates are small; which is necessitated because the tables are small, too. But I’d rather have big portions on small plates, than tiny mounds on enormous slate slabs mostly taken up by drizzles and splotches, which seems to be the style these days.

Dessert is another weak point; it’s a tremendous missed opportunity because there are only three choices, all of which are a bit mundane, a bit mushy, a bit expensive. Since it’s in a mall, you can always move on somewhere else for sweets, but it would have been nice to keep our bums in our seats and progress slowly through an interesting dessert, onto Yardstick coffee and then, for those who are so inclined, segue into drinks at the bar.

A posh restaurant with good desserts is also an oasis for those who are on a budget, so that (as I did during my student days) you can have dinner at a cheap restaurant in the basement and then come upstairs to linger.

CDP, despite having the trimming of a brasserie, actually has more of the scale and friendliness of a bistro, and every neighborhood should have one. Part of every bistro’s job is to keep you coming back for its friendly staff and unpretentious food, as well as to stuff you in a way that will keep you fortified to face another week of slow-burning carbohydrates and boiled chicken breasts. In this task, the restaurant succeeds with a flourish.