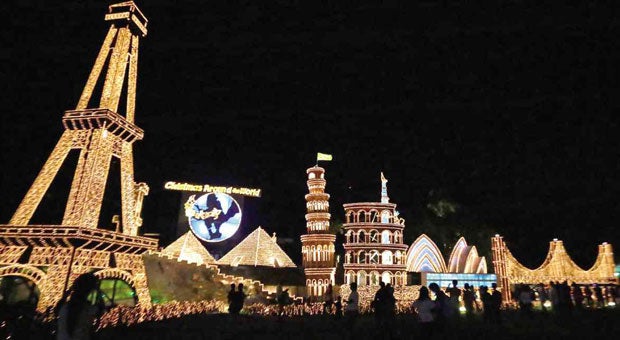 LANDMARKS of the world come to life in a 3,000 square meter compound owned by a doctor in Malinao town in Albay province. NIÑO JESUS ORBETA

MALINAO, Albay—Residents of this town need to take only a few steps from their homes to get to the Eiffel Tower, Leaning Tower of Pisa, the Pyramids of Giza, the Golden Gate of San Francisco and the Great Wall of China among other international landmarks, their replicas at least, that had risen in a 3,000-square meter compound here.

The display, carrying the theme “Christmas Around the World,” has drawn visitors from not-so-near places like Manila.

This is the 17th year of the display, according to the owner of the compound where it rises every holiday season, Dr. Floro Lianko.

The drawing power of the Christmas display is such that even those with illnesses gather their strength to visit the place.

One of them is eight-year-old Joshua Tutor, who came to the display still with a dextrose attached to his arm after suffering from diarrhea and is confined at a clinic also owned by Lianko inside the doctor’s compound.

His mother, Marites, said it was Joshua’s first time to see a life-size Santa and it worked wonders on the boy. Her son, according to Marites, felt the pain in his belly vanish.

“He was very persistent in asking me to take him out to see the display,” said Marites.

Aside from Lianko’s patients, hundreds of other spectators, mostly from out of town, have been flocking to this laid-back town to see the display since Lianko lit it up on Nov. 30.

Aside from the landmarks already mentioned earlier, the display also features replicas of the Windmills of The Netherlands, the Taj Mahal of India and the Philippines’ Rice Terraces.

Lianko, 69, a native of this town and a general medicine practitioner, told Inquirer on Tuesday that he was surprised to see visitors from as far as Manila come to the town just to see his Christmas display since the town is at least 500 km away from Metro Manila.

The display is a labor of love for Lianko who said it took him at least 10 months to put it together using materials as common as Styrofoam and plywood.

A team of architects and laborers he hired helped him realize his “dream concept.”

“It’s my passion to decorate during Christmas time. I would like to offer joy to people,” said Lianko.