Our prayers have been answered: Chvrches is coming to Manila | Lifestyle.INQ ❮ ❯ 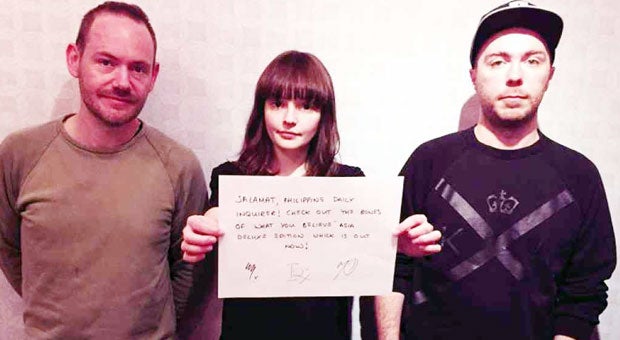 Our prayers have been answered: Chvrches is coming to Manila

Chvrches is arguably the hottest thing to come out of Scotland in a long time. The synthpop trio was formed only in 2011, and it’s been only a year since “The Bones of What You Believe,” its first major album, was released.

With members Lauren Mayberry (vocals), Iain Cook (synths, guitar, bass) and Martin Doherty (samplers and synths) Chvrches has found a place in the playlists and hearts of listeners around the globe.

Its official debut single “The Mother We Share,” the clawing, come-hither tracks “Gun,” “Lies” and “Recover” are just some of the songs that fans scream to in every show. The band has created quite a following not only through its records, but also as touring musicians.

It has performed in different cities across Europe, the United States, Canada and Asia, participating in every imaginable reputable music festival there is: SXSW, Sasquatch, Coachella, T in the Park, Reading and Leeds are but a few of them.

Recently the band was commissioned to write music for the “Hunger Games: Mockingjay-Part 1” soundtrack and to contribute to the rescoring of the Nicolas Winding Refn film “Drive.”

The band’s success comes as no surprise, though, as its members have been into music for a long time and have had the liberty to nurture their inclinations before coming together.

Aside from creating musical scores for film and television, Cook was a member of Scottish alternative rock bands Aerogramme and The Unwinding Hours. Doherty was part of post-punk indie-rock band The Twilight Sad.

Lauren Mayberry is an entirely different story. Her pretty face and youthful, endearing voice may have won you over, but there is more to her than what captures the senses. Playing piano since childhood and singing and pounding the skins for a few bands from the age of 15 throughout her early 20s may sound impressive, but there is more to admire about Mayberry.

The singer-songwriter also has an undergraduate law degree and a Master’s degree in Journalism, and previously pursued a career as a freelance journalist.

It would be easy to imagine Mayberry’s words on print or even her in front of the camera as a broadcast professional; but as fate would have it, she has since taken over vocal duties for one of the most promising synthpop acts to date.

Chvrches is a relatively young band that continues to make a mark in an industry that turns off the spotlight almost as easily as it makes room for the next emerging artist.

In this interview, Chvrches vocalist Lauren Mayberry answers a few questions for Inquirer Super and talks about the creative process and dynamics of the band, among other things.

What’s a normal day for you? What do you do when you’re not performing or making music?

At the moment, our normal days involve gigs, promo activities and maybe some sleeping whenever there is time. When we’re off the road (which isn’t a lot right now!), we all enjoy films, spending time with people we don’t get to see very often because of a tour, and a casual night in the pub.

Tell us about working on a song for the rescoring of the film “Drive,” and the one for “Hunger Games.” What was the experience like?

It was really interesting to write songs for a specific purpose, rather than for your own album, and it was exciting to be writing again after so much time away from it. We are all big film fans, so creating art to score someone else’s art is really incredible.

Before Chvrches, you were members of other bands which, from what we’ve read, were more guitar-based. What made you decide to go to the electronic, more synthpop side of things?

The sound of this band was mainly influenced by what we were listening to at the time, and also the instruments we were using. In our previous bands, the primary writing instrument had been the guitar, but in Chvrches, we normally start with keyboard or samples. We use a lot of vintage, analog synthesizers.

Tell us about your songwriting process. Who’s more focused on writing the lyrics, the arrangements, etc.?

We write all the songs together, but everyone has slightly different roles, and we can all play to our strengths in that regard. As Iain and Martin come from production backgrounds, we are able to self-record and self-produce, which gives us an added flexibility, so our writing process is our recording process because we demo as we go along.

We normally start with a beat or a sample or a new sound, and then build up an instrumental version of a song at the same time as a vocal melody, and then I add the lyrics in last.

Is songwriting still more of a personal process and an art, or has it become more technical?

Lyrically, we tend to write about more personal things—not necessarily a personal experience, but generally a personal perspective on a situation. But the way we start writing is normally more technical and about the sounds and the rhythms, rather than the narrative of the song itself.

You’ve come a long way since you started out in the scene. How do you think you’ve evolved as songwriters and performers?

The live show has definitely evolved over the past two years, as the venues have gotten bigger and we’ve added more production. We’ve become more comfortable with what the band is, live and in the studio, so it’s exciting to be going back into writing mode at the end of this year.

What is it about your dynamics as a band that makes it work?

I don’t know—that’s the golden question! We have all written with a lot of other people before, and this band has definitely been the best writing dynamic any of us have ever had, but you can never really put your finger on why.

I think it must be about learning to trust someone’s talent and instincts, and also everyone’s strengths lining up to make something that really works.

Was there a specific point when all three of you realized that Chvrches was really going to make it big? Do you recall what happened?

We’ve been incredibly lucky to do as many different things as we have in the last couple of years—playing amazing festivals and traveling to so many wonderful places—but at the moment we’re still trying to work really hard and keep our heads down. I think that as soon as you think you’ve “made it,” you are probably taking your eye off the ball.

There are only three of you, and yet people are enthralled by your performances. Aside from your music, what else do you think makes a huge impact on your audience? Do you make a conscious effort to keep the crowd fascinated when you perform?

It’s always important to us that our live show be just that—live. There can be a tendency with certain kinds of electronic acts to run everything through a laptop and just karaoke around in a glorified playback party, but we all come from live music, gigging backgrounds so it made sense to us—for our own enjoyment and that of the audience—to play as much of the music live as humanly possible.

Other than that, we have been pretty focused on the visual element of the shows, especially as the venues have gotten larger, and we work with an ace guy named Louis Oliver who designs all our light shows, incorporating the visual theme of the album artwork into the live shows.

You’ve released a highly successful album, toured the world and are probably the hottest things that have come from Scotland in recent years. What would you consider your biggest career highlight/s so far? Is there still something that you aspire for in your career as musicians?

At the moment, we’re focused on playing great shows for the final run of touring that we’re doing, and then we’ll be getting our heads back into the writing zone at the start of next year. Beyond that, who knows? 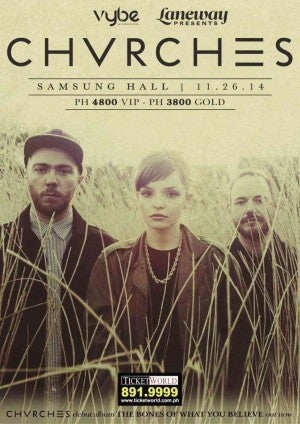 What’s your favorite track from your album? Which one is closest to your heart and why?

I think this probably changes every day for each of us, but the song “Lungs” is one that I always come back to because I remember what I was thinking about when I wrote the lyrics, and it’s interesting to play that song now and think about how far we have come.

Are you coming up with new material for a new album? What’s next for Chvrches?

We will be touring until the start of December, then taking time off road and starting work on a second album in January. When it will be released, we are not quite sure, but I’m sure we won’t be out of sight for too long.

While waiting for the second album, fans could sing along to their favorite Chvrches hits, along with some bonus tracks with “The Bones of What You Believe Asia Deluxe Edition” now available locally through MCA Music.

And there’s more to be excited about! November sees Chvrches on this side of the world as it play a series of shows in the Asian region.

Made possible through the efforts of Vybe Productions, Chvrches will be performing on Nov. 26 at the Samsung Hall of SM Aura, Bonifacio Global City.

Tickets are available through Ticketworld at www.ticketworld.com.ph or tel. no. 891-9999.