The state-of-the-art The Theatre at Solaire wants to be ‘a second CCP’ | Lifestyle.INQ ❮ ❯ 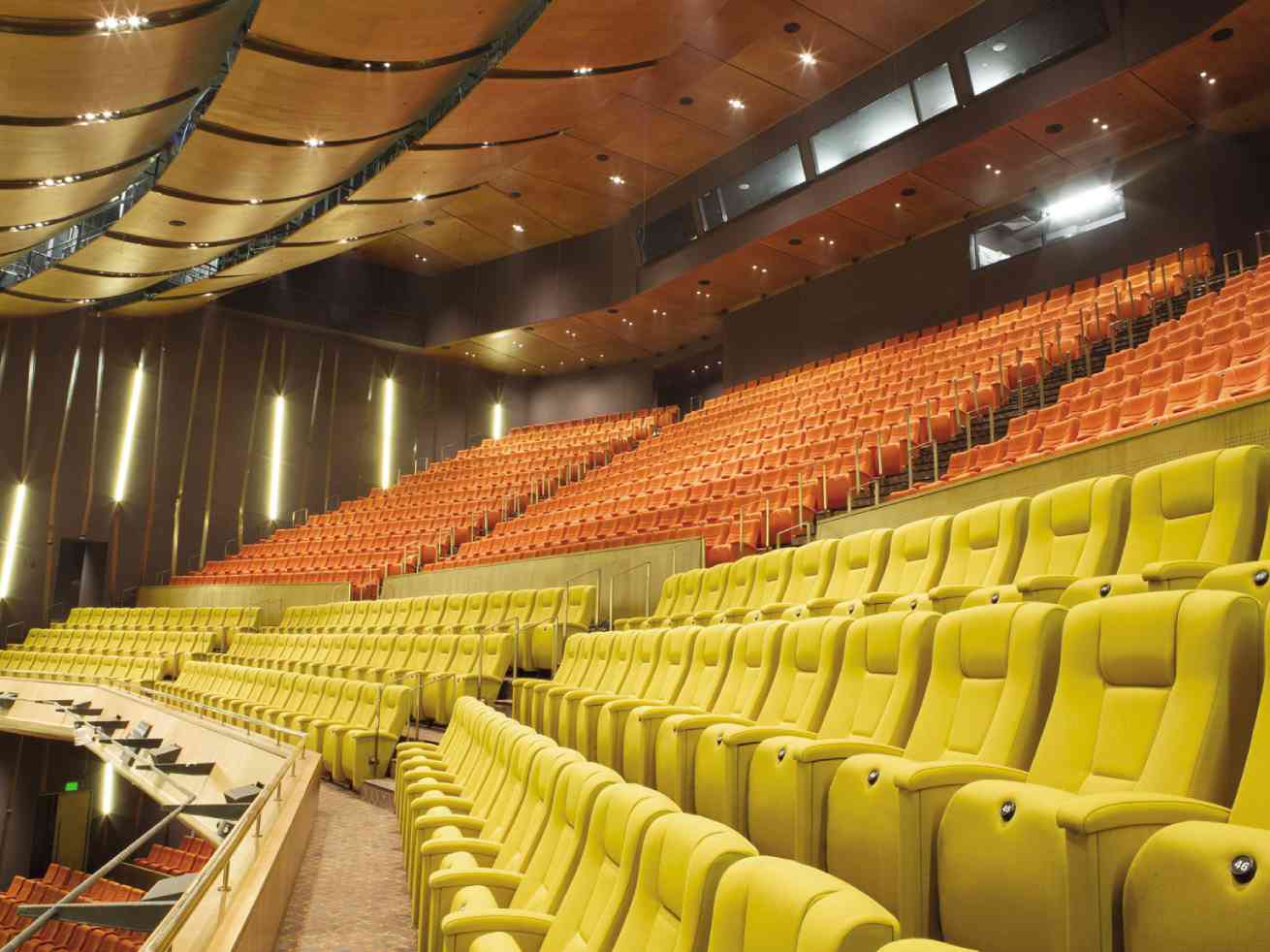 Audie Gemora beams as he walks the stage of The Theatre at Solaire—the spanking new venue for live musical and theatrical productions which he says the integrated hotel-casino-resort’s management planned and spent huge amounts on based on a vision.

“Solaire wanted to have its own world-class theater for Broadway-type shows aside from championing local talents,” says Gemora, now Solaire’s entertainment director. “It had vision because you just can’t decide to build a theater and then bahala na on how it’s done. You got to do it right, and Solaire did by hiring the right designers who do theater design. The consultants are all foreigners. Pinaghandaan, ginastusan.”

The Theatre at Solaire was designed by Aedas—said to be one of the world’s five largest architectural firms whose completed projects include The Star Performing Arts Centre in Singapore.

The 1,760-seat theater has been fitted with high-end audio, video and production lighting systems by Las Vegas-based theater consultant group Coherent Design, which also worked on City of Dreams in Macau.

The fan-shaped layout of The Theatre at Solaire is touted to have “excellent sight lines from every seat, ensuring a consistent experience for all members of the audience.” Its seating is arranged over two levels, Stalls and Balcony.

But its most outstanding feature, according to Gemora and Solaire Theatre manager Ed Concepcion, is the Constellation sound system designed by Meyer, an American company based in Berkeley, California, that manufactures self-powered loudspeakers, multichannel audio show control systems and electroacoustic architecture, among others.

“It’s the only one in the Philippines. And in Asia, only Singapore and Macau have it,” Concepcion says of the Constellation, adding that Bob McCarthy, whom he describes as a “sound guru,” came to Solaire to tune its theater.

Gemora explains that, in layman’s term, “the Constellation system is like a network of microphones that have been implanted all around the Solaire Theatre, so that it picks up every single sound which can be controlled by a computer. The overall resonance of the theater becomes more versatile. Some theaters are suited for recitals, others for rock concerts, musicals. The Solaire Theatre has a versatile sound system.”

Concepcion and Gemora are two of a number of professionals hired by Solaire for their theater background. Concepcion was manager of the Meralco Theater for 11 years. But Gemora was initially hesitant to take on the job of Solaire entertainment director.

He first came to Solaire to offer the services of his performing talents at Stages, the company he manages with Carlo Orosa. He was proposing that his talents perform at Solaire’s Eclipse Bar.

“I was doing a presentation and at that time, Solaire was looking for an entertainment director. It found somebody for awhile… But he quit,” he recalls.

In a few meetings with Solaire vice president of brand and marketing Jasper Evangelista, Gemora says he was invited to join the company in a full-time capacity.

“But I didn’t want to take the whole job,” he admits. “I said, ‘I’m interested in your theater ’cause it’s been a big problem all the time. In our industry, somebody builds a theater without consulting the end user, the theater people and we’re stuck with a theater that’s not really ideal.”

Gemora says the “forward-thinking” attitude of Solaire management in its concept of The Theatre was “compelling for me. When Jasper said, ‘Partner, sali ka na…’ sabi ko I would be interested if you let me handle just The Theatre and not all the entertainment. But he said The Theatre is 80 percent of what the entertainment director will do here. So, that convinced me.”

Gemora, a veteran theater actor and director who honed his craft in Repertory Philippines, is apparently speaking for all his colleagues in the Philippine theater industry.

“The fact that puro kami taga-teatro na magpapatakbo nito, we have a clear understanding of what needs to be done production-wise, and also how producers can also help build a profitable industry,” he says.

“For example, instead of just saying ito na ang rental fee namin, we can be a bit more pliable,” he explains. “If it’s a Broadway show, ito ang standard fee; but for a local production, maybe we can change the fee a bit or be creative on how we can help each other so we can encourage the best content in Philippine musicals or concerts.”

His plan is to make The Theatre at Solaire an attractive option to other theaters in the country. In fact he wants it to be “a second CCP.”

The Main Theater of the CCP (Cultural Center of the Philippines), he says, “is always booked year-round, it’s not easy for a production to get in… So this could be a wonderful option. I want The Theatre at Solaire to be very welcoming… a center of culture and arts. But at the same time, it services the needs of the resort. Our valued gaming clients come from Asia, the Chinese market… Now I have to learn kung sino’ng sikat sa China or sa Taiwan and I will bring those acts here.”

Gemora is quite emphatic when he talks about the Philippine theater industry. He says his new job at Solaire “is now the biggest challenge for me. For the longest time the arts have been considered a beggar… Theater people are always begging for funds. Here we have a different model. It is big business willing to support the arts. The challenge here is to prove that arts and culture can add to the business. We want Solaire to grow its business by having the best shows that its theater could provide.”

While standing onstage he proceeds to enumerate the theater’s other excellent features. “See that,” he points to his back, referring to a structure known as a fly system—a line of ropes, pulleys, counterweights and related devices within a theater that enables a stage crew to quickly, quietly and safely hoist components such as curtains, lights, scenery, stage effects and, sometimes, people. “We have 62 fly lines!”

He takes note of the theater’s wide wing space, which is important when productions have big sets to put on the side of the stage.

“Come,” he invites us to take a tour backstage, which reveals an astonishing array of amenities: 14 fully furnished dressing rooms; an accommodating greenroom/pantry; a multipurpose rehearsal studio; a black box performance space; laundry and wardrobe rooms; production offices; and an extensive TV monitor and communication system.

“This is a dream theater,” Concepcion gushes.

The Theatre at Solaire’s features will be demonstrated in a special invitational show on Nov. 26 featuring some of the country’s best performing artists.