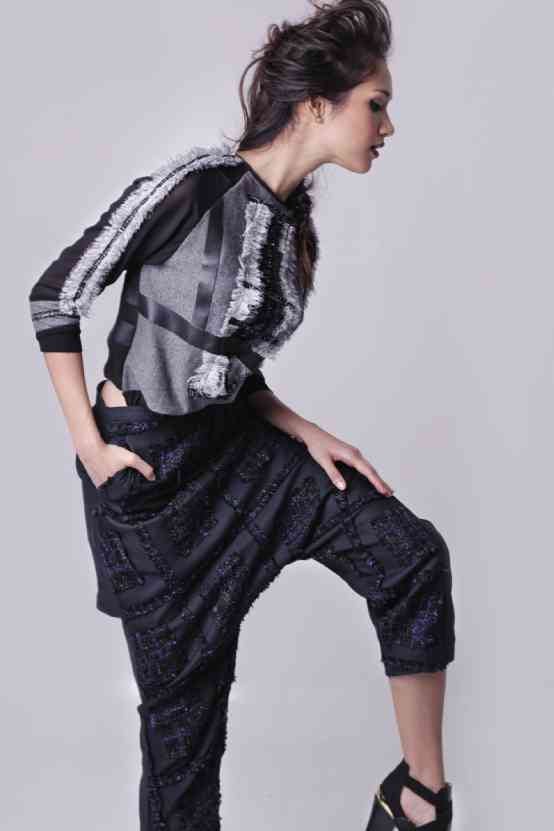 THE PIECESwere well constructed and paid attention to detail.

Structured, androgynous, layered and mysterious—these were our initial reactions to models strutting down the runway in Via Valencia’s collection at the Fashion Institute of the Philippines’ graduation show.

It was a collection of apparent contradictions: Oriental but Western, languid yet strong, dressed up but casual, easy yet well made.

Faced with off-center closures, big cuts, kilt-like detailing and samurai-type pleating, we couldn’t tell whether this collection came from the East or the West. The dark color palette only added to the mystery of its origin.

Altogether, the pieces were designed for a worldly, well-traveled, fashionable clientele. As separates, each piece was just as strong as when they were coordinates; one could not go wrong with any of Via’s items.

The manner of styling made the clothes appeal to a variety of aesthetics. From the casualness of the plaid sheer tops and the raw yet finished look of her trousers to the amalgamation of nationalities in her jackets, her collection displayed a range of styles.

The pieces were also well constructed and paid attention to detail. Looking at her frayed twill and unexpected closures, you couldn’t help but think luxe.

There was nothing pretentious about Via’s clothes; they were very laid-back—anyone could pull off these clothes without appearing to put too much thought into it.

Talking to Via right after the graduation show, we went into the details of her collection. She started by sketching what she had in her mind’s eye. With each stroke, she thought about what she wanted and what we, as the audience, would probably like.

It was a marriage that was necessary for her, as she wanted to see her craft not only as an expression of her desires but also as manifestation of a collective want—hers as well as that of the masses.

This, of course, grew organically with her experience in fashion; it wasn’t something contrived. She simply melded her various inspirations from the past and the present.

Even as she now looks up to the likes of Yamamoto and Ackermann, Via recalled a time she knew little of fashion or its icons. She simply drew inspiration from what was popular and appealing at the time.

She started by replicating Pretty Sailor Senshi when anime was popular. In high school, she admired the beautiful dresses she saw on mass media. On her pad, she sketched what she thought was fashionably cutting-edge yet appealing and understandable to many.

Looking at her clothes in detail, one sees an array of fabric swatches that many an experienced designer would not usually combine. The thing is, it works perfectly.

When Via started sourcing materials for her collection, she didn’t (and still doesn’t) know much about fabric. She simply went with what felt good to her.

This perhaps is where her being “green” works in her favor.

It’s unassuming, endearing and fresh. This is just how she works: What she feels, she creates, from fabric swatches to patterns. She does not know too many of the technicalities.

One example of just going with her gut would be her blue jacket with oversized sleeves. Not knowing how to create this pattern, she just went with it.

Via was truly successful with her collection. Backstage, she was already swamped with questions and offers, I could hardly get a word in edgewise.

She has won awards, from the YKK Award, the Best in Fashion Illustration and the Best in Construction to the Design Novitiate Award and the coveted Designer of the Year. To think she almost missed out on the fashion world—her family wanted a corporate career for her.

It was her determination to fight for her dream that got her where she is. She decided there was no harm in trying, and she flourished.

She still isn’t comfortable with the term “designer.” She believes there is still much to learn.

Going by this collection, we should all be very excited with what Via has in store.