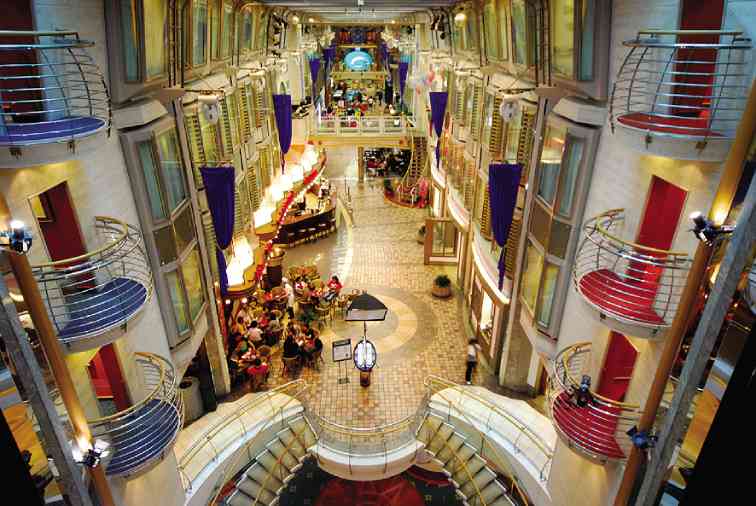 It was 6:30 a.m. Expecting the warm morning sun rising on the horizon, I was instead pushed back by frigid, blustery winds on the deck.

I had forgotten. The ship, now sailing in open sea, was cruising at full speed. Everything, save for the stream of lights glowing in the ship, was engulfed in pitch-black darkness. Even at half past 6 in the morning.

But when the sun finally shone at 7:15, peeking slowly at first, rising from a smooth sea in the distance, even hardcore fitness buffs circling the jogging path had to stop to take in the view. It’s not every day, after all, that you get to see sunrise at sea.

Many people think that going on a cruise is for the old, withered, world-weary traveler/retirees. But hop aboard Asia’s luxurious cruise liner, Royal Caribbean International (RCI), and you’ll be surrounded by a crowd of mostly young people: employees on a break, college buddies, families with children in tow, couples and friends.

Patricia Ramos, director of sales and marketing of Arpan Air, the international representative of RCI, said the Asian market has a much younger demographics than the West.

Cruise Critic, founded in 1995 and owned by the Independent Traveler, a subsidiary of TripAdvisor, ranks Mariner of the Seas among the top choice destinations of travelers. And that’s because the ship itself is a destination.

Mariner of the Seas, the largest cruise ship in Asia with a gross tonnage of 138,000, has a total of 15 decks, 10 pools and whirlpools, and 17 bars, clubs and lounges. A five-day cruise will go by fast as there are so many activity options each day.

A comprehensive list on what to do, what to see and what to taste is printed on the daily Cruise Compass, a newsletter delivered to your cabin every day.

The most popular strip on the ship is the Royal Promenade on Deck 5, a boulevard of shops (tax- and duty-free while sailing), cafes and pubs reminiscent of quaint, European streets sans the cobblestones.

Our favorite hangout is the Café Promenade, open 24 hours, serving specialty coffees and teas—and the best cookies onboard.

Sit outside, just across the charming pub, sip your coffee, and people-watch. From here you can enjoy an unobstructed view of the four-story Royal Promenade. Come early, though, as seats outside are almost always full.

The Royal Promenade is also a good place to spot the DreamWorks Animation characters walk by. Children and adults will be delighted to meet Gloria, Puss in Boots, Shrek, Princess Fiona, Po (Kung Fu Panda), the Madagascar penguins and more, and even watch them dance during the DreamWorks Parade. DreamWorks is an exclusive feature of Mariner of the Seas.

Good news for shopaholics. The Promenade Shops are almost always on sale. On special days when a sale is announced, prices are slashed drastically. Watches at $100, for instance, go on sale for $25. Even luxurious gadgets, such as Leica cameras, will be marked down to less than $1,000.

If shopping is not your idea of a vacation, Mariner of the Seas offers a variety of shows, such as the popular ice-skating performance in “Ice Under the Big Top” at Studio B or nightly shows at the Savoy Theater hosted by the charming cruise director, the Englishman Gordon Whatman.

Up on Deck 13 are adrenaline-pumping activities for thrill seekers of all ages: a rock-climbing wall (shoes, helmets and harnesses are provided); an in-line skating track, where you can also learn how to skate; full courts for basketball and volleyball; Mariner Dunes Golf Courts, a 9-hole mini golf course for adults and children.

On Deck 12 is the Vitality at Sea Spa & Fitness Center, which has signature massages, beauty tips lessons, manicures, seaweed wraps, personal training, metabolism analysis, and even cardio and spinning classes.

Right outside is the jogging track that winds around the ship, a video arcade, pool deck, Johnny Rockets diner with its famous burgers and milkshakes, Fuel Teen Disco exclusive for teens aboard, outdoor movie screenings by the pool showing Hollywood blockbusters night after night.

It’s also where you’ll find Boardwalk Dog House which, according to the ship’s crew, was Kris Aquino’s favorite hotdog place when she and her kids took a holiday cruise last year.

About 25 percent of the crew is Pinoy. The executive housekeeper, Jose Mallari, is one of the highest ranking Filipino employees onboard. The executive sous chef, Ramil Buhian, the man in charge of serving more than 15,000 meals per day, is also a Filipino who used to work at Plantation Bay in Cebu City.

A lavish buffet is served at the casual seaside café called Windjammer Café. Here you’ll find an international cuisine, from salads and mains to desserts. Be prepared to tread your way through a thick crowd at lunchtime, as almost everybody onboard chooses to eat here.

Family-style dining is offered in the casual Italian resto Giovanni’s Table. If you want a fancier setup, there’s Chops Grille, the onboard steakhouse that serves the juiciest, most tender medium-rare steaks.

You will be billed if you dine at Chops Grille, as you will also have to pay extra if you buy alcoholic drinks and sodas.

There are very few exempted establishments from the package, such as Chops Grille.

There are piano jazz bars and string trio shows for those who want a more relaxing evening.

There are lively parties on the upper decks, and even ballroom dancing with dance instructions. And then there are DIY workshops, such as napkin-folding or flower arrangement classes.

Gaming enthusiasts and cautious risk-takers will be happy to know that Mariner of the Seas has an onboard Royal Casino. The only time the casino closes is when the ship docks for land excursions.

We embarked at Singapore and departed for Thailand. The ship docked at Laem Chabang, Thailand, a two-and-a-half hour ride to Bangkok and about 45 minutes to Pattaya.

Our group was taken to Pattaya for a quick massage and shopping, before we hopped on back to the ship in the afternoon.

Some passengers, however, decided to stay overnight in Bangkok, or went sight-seeing in famous Pattaya Elephant Village.