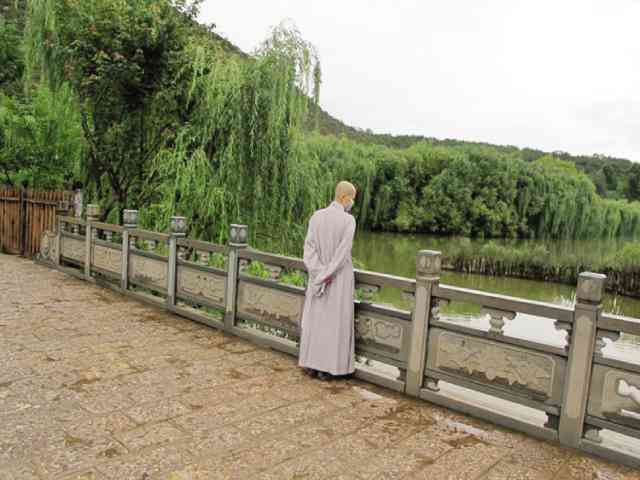 A BUDDHIST monk contemplates on the beauty of the Black Dragon Pool Park in Lijiang.

How Nina Halley found Shangri-La on her 60th birthday

Breaking away from the glitzy Manila party scene, entrepreneur Nina Halley spent her 60th birthday in the Tibetan hinterlands in southwest China.

Halley’s businesses include real estate and the popular Love Garden, which services hotels and high-end clients.

This elegant lady is one of the best hostesses in town. But, instead of entertaining, she chose to mark her milestone quietly with her children Shavit and Rihannon in the Himalayan foothills in Yunnan province.

The first week was savored in Lijiang, a city situated beside a mountain valley shielded by revered snow-capped peaks. The place is often compared with James Hilton’s fabled utopia called Shangri-La in his novel “The Lost Horizon.”

Lijiang has become a popular destination for its preserved old quarter, called Shuhe, which is known for bubbling waterways, old stone bridges and ethnic women in their traditional costumes.

The Halleys stayed at the Banyan Tree Resort. The windows offered a panorama of centuries-old trees and rooftops dotting the valley and peaks. Over breakfast in the main dining area, they welcomed the vista of a pagoda etched against the Jade Dragon Snow Mountain, Lijiang’s iconic landscape. Outside, the view opened up to mountains covered with barley fields.

The Old Town of Shuhe is a Unesco World Heritage Site, famous for its offering of nature, history and culture. Consisting of three major streets, this historic town is built with cobblestone lanes that were interlaced with willow-lined canals.

Visitors explore the winding alleys to appreciate how the locals preserved their homes that were built of wood, bricks, heavy wooden doors and shutters and curving gray-tiled roof.

Stone bridges bow over the tributaries of the Yuhe River that stream through Shuhe. The scene is made more picturesque by creepers on the old walls and the blossoming trees that shield kois in the water passages.

Shuhe is a walking town filled with many stores that sell silver jewelry and teas, occasional crafts, and traditional Chinese medicine. Later in the day, ethnic dancers assemble in the Square Market. The center of the town is the famous waterwheel where most tourists like to be photographed with the ethnic group Naxis.

Halley said tourists can enjoy a variety of restaurants that serve local cuisine, pasta and pizza; there are cafés and bars as well.

The family’s quieter moments were spent in Black Dragon Pool Park. Although its main attractions are ancient temples and pavilions, the Halleys loved the quietness of the pond and its pristine waters—one could see the pebbles lining its floor and the flourishing fish life.

The Halleys then drove up to Ringha, considered part of Shangri-La County. For tourism purposes, Chinese officials have clustered several towns and named them after the fabled mountain paradise.

Ringha is bordered by Tibet, Burma (Myanmar) and Sichuan province. The Halleys were taken by a culture that has remained largely untouched by consumerism and modernization.

They were captivated by the sight of Buddhist monasteries, yaks, horses and other farm animals on the road. Since it is situated at 3,300 meters above sea level, the place often left visitors panting as they climbed up to their lodges; they were provided with oxygen-filled canisters.

The Halleys were billeted at the Banyan Tree Ringha, whose villas took after the Tibetan farmhouses with their dark woods, latticed windows and quilted curtains. The second floor had a terrace that overlooked the river and the snow-capped mountain range. Every morning, they would be greeted by a yak or some farm animal wandering inside their lodging.

They had their meals at Banyan Tree’s Changsa restaurant which specializes in Tibetan hot pot of yak, juicy meats and condiments.

To acclimatize themselves, the Halleys took a two-hour trek along Shudugang, Ringha’s sacred river. This preparatory hike had a trail that took visitors to the pine forest and cherry trees and exposed them to indigenous plants.

A longer seven-hour trek included a 700-year-old hunting route, a picnic lunch along the tree grove by the river, and a hike to a hilltop pasture for a view of the surrounding villages.

A similar hike took them to a higher altitude of 3,360 meters. After passing through an awning of pine trees and rhododendron groves that spanned the precipitous part of the trek, they were greeted by the sight of mystical mountains.

Sixteen kilometers from their hotel, the family felt the power of peace emanating from the chanting of 800 monks at the Songzanlin Lamasery, the largest Tibetan Buddhist lamasery in Yunnan. Their senses were further soothed by the walk along the valley of Shiga Mountain and lunch in the old town of Dukezhong.

The Halleys also enjoyed the tour to Tibetan villages where the locals wear native costume, and to the Tiger Leaping Gorge, one of the deepest canyons in the world with a 16-km drop.

The scenic nomad Alpine trek evoked the explorations of botanist Joseph Rock in “The Lost Horizon.” The route reached an altitude of 3,700 sqm where the mountain plateau seemed to kiss the sky and the landscape was littered with pine forests, snow-covered mountains, wild flowers, streams, and medicinal plants on forest paths.

The Shangri-La culture tour exposed them to the extraordinary hospitality of the Tibetans in their farmhouses. The family was touched by the simplicity of their lives, as they saw the locals make yak butter and cheese, take care of sheep and horses and wear fur for warm clothes.

But beyond the culture and nature trek, the deep conversations and the bonding with her children made Halley feel that she was truly in Shangri-La.