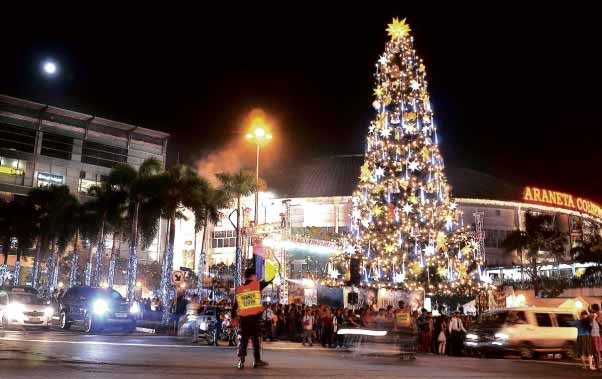 MANILA, Philippines—For President Benigno Aquino III, he had only happy memories at the Araneta Center in Quezon City.

In a speech at the 60th founding anniversary of Quezon City’s central business district, President Aquino recalled how Araneta Center became part of his childhood, calling himself a “batang Quezon City” (child of Quezon City).

Although his speech was brief, he gave a rare glimpse of his family’s life away from politics.

Like any other family, the Aquinos too, had trips to Araneta Center to buy their school supplies at the National Bookstore.

The President said it was his mother, Corazon, who brought him and his siblings to the Araneta Center to prepare for every school opening.

Mr. Aquino said his parents treated him to the restaurants in the Araneta Center whenever he did well in school.

His father, Ninoy, brought him to Araneta Coliseum to watch his first boxing match.

It was also at Araneta Coliseum, from the courts to the parking lot, where he witnessed the intense basketball rivalry between Ateneo de Manila University, his alma mater, and De La Salle University.

The President’s parents would later on became the country’s icons of democracy, fighting martial law that came with a heavy price—the assassination of Sen. Benigno “Ninoy” Aquino Jr.

Since Araneta Center was founded by the family patriarch, J. Amado Araneta, six decades ago, President Aquino noted how the business district had changed immensely.

Small establishments, he noted, have been replaced by “high tech BPO offices.”

President Aquino lauded the Araneta family as “visionaries” able to strategically plan Araneta Center’s future that provided services to the public and employment to many.

He said he admired the family for literally staying in their roots, not leaving their home in Cubao even if they could live in gated subdivisions.

The late business tycoon Araneta, who founded the Araneta Center in the 1950s, transformed the 35-hectare land in Cubao into a thriving commercial hub in Quezon City.

Mr. Aquino’s speech was interrupted at least five times by his coughing.