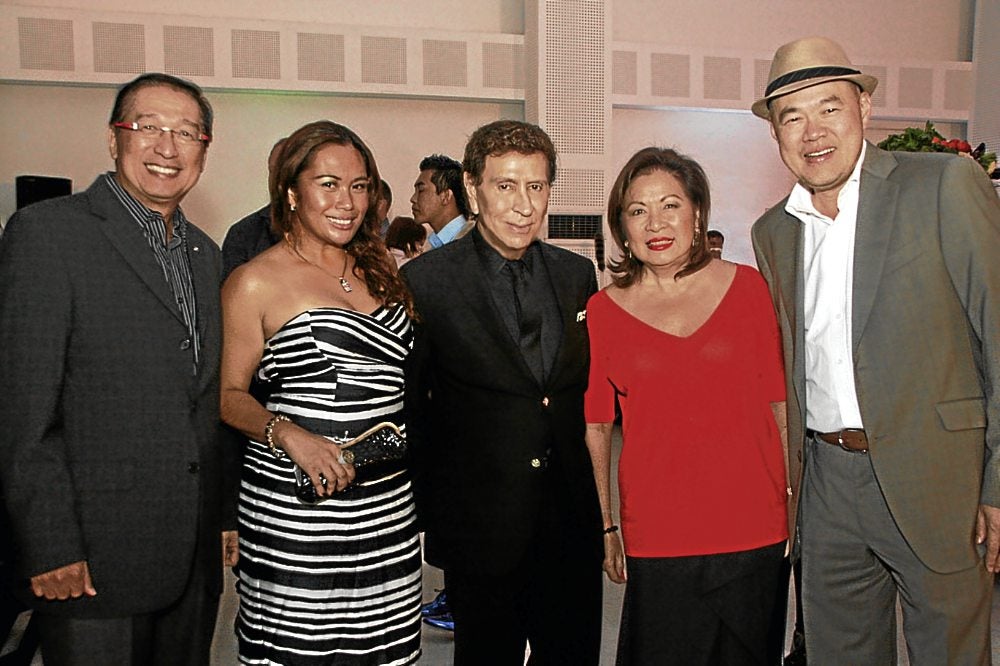 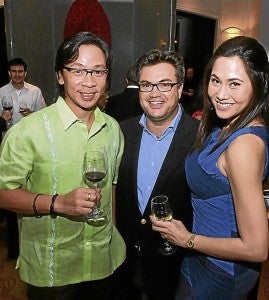 As always, when it comes to chic-ness, Philippine Tatler is one of the leaders of the A-listers’ set, dahlings. No wonder Red was the venue at the Makati Shangri-La, where cocktails and chilled champagne, naturellement, were served to celebrate the “James Suckling Guide to Bordeaux 2010 Futures” in cooperation with Visa, Sony and Wine Story, an event attended by true lovers of excellent wine and sumptuous food, palanggas.

The highlight was the announcement that James Suckling has become Tatler’s wine editor starting this year. Forbes Magazine has called the Los Angeles-born Suckling “one of the most powerful wine critics.” Check out his website www.jamessuckling.com.

We learned that “buying wine is similar to buying commodities on the stock market. Instead of coffee or gold, buyers pay for wine maturing in the cellars of the best chateaux that will not be delivered until two or three years after the harvest. It becomes a good investment depending on the vintage and the price you can acquire it for. In the James Suckling guide, the Filipino investor is able to navigate the world of wine futures with relative ease.” 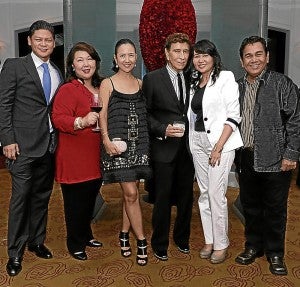 Major partner was Visa, which presented its Infinite card, a card so exclusive that it is by invitation only. The company was represented by Visa’s country manager, Iain Jamieson.

Sony, another partner, unveiled its exciting and luxe computer, the PC-VAIO Z. The materials used for this awesome notebook are from an aircraft and an F1 race car—light and strong, as presented by Sony Philippines president Takao Kuroda, dahlings.

With excellent finger food, from the Peking duck station to the cheese table and yummy appetizers, downed with the best white and red wines from Wine Story, it totally was a connoisseur’s dream happening.

Their fashion is a lifestyle concept for jaded or new world travelers, so it was no surprise at all, as moi rubbed elbows during cocktails with 280 of Manille’s creamiest of the cream for Travelife Italy Night, an incredible gastronomic evening organized by the popular Travelife Magazine for its fourth-year grandest anniversary, yet, together with renowned chef par excellence Margarita Fores; vivacious Silvana Fornari, wife of Italian Ambassador Luca Fornari; the Embassy of Italy; and in cooperation with HSBC, Bacchus Epicerie and Wilmax.

It was a full house at White Space, with a gorgeous Ferrari and Maserati plus 12 eye-catching vintage Vespas in the cocktail area, where they had an open bar, and chosen regional wines plus two huge round tables with seven kinds of antipasto buffet-style, dahlings. It was just the tip of the iceberg before the divine nine-course Italian dinner and a stellar crowd of namedroppables headed by former Philippine President Fidel Ramos, no less; President Benigno Aquino’s sisters Pinky Aquino-Abellada and Viel Aquino-Dee; and ambassadors and hotel executives, dahlings.

Travelife Magazine brilliant publisher Christine Cunanan, the brain behind this spectacular event, personally supervised the production, working on it for days before the happening. She was eye-catching in a purple gown, welcoming her invitees and presiding over the presidential table. 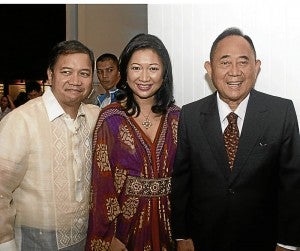 But the dazzling star of the night was, naturellement, my Princess of Italian gourmands Margarita  and her awesome degustation menu.

At the end, heavy A-listers and hotel top execs rushed to the kitchen dazzled by the culinary artistry, asking, “Where can we have this meal again?” The answer was, “This menu was created especially for Travelife Italy Night only,” dahlings.

A clearly delighted Christine said, “We intend to be the only magazine that writes about travel and truly brings travel to our readers.”

And true to her words, darlings, we were all mesmerized and transported to Italy for one awesome magical evening, without the charges on your credit cards you get after a trip like this abroad, palanggas.

Patrice and JC at Fashion Watch 2011 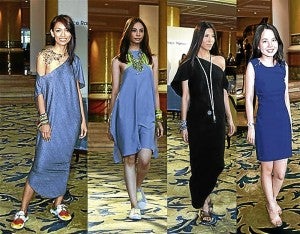 Sportswear-inspired designs were the main focus of Patrice Ramos-Diaz. She wanted to offer something fresh and new, while gorgeous pieces from one of the original icons of timeless accessories, Joyce Oreña, no less, dahlings, kept the collection edgy and captivating.

“Joyce has taste and creativity, she can make any simple piece look expensive and unique,” Patrice says.

Eye-catchers besides the accessories were the sneakers worn by the models and the designer herself, and chic shoes for the dressy outfits designed by Melissa.

“I wanted something trendy, not the usual red-carpet shoes,” says Patrice. “This is actually my first time to go this bright for a more playful fun and summery look,” she said with a smile.

“My inspiration came from first ladies—Jackie O and France’s Carla Bruni Sarkozy,” said fashion designer JC. Silk abaca, a new fabric from Catanduanes that looks like piña, was one of the materials used for his line.

“My strength is tailoring, to be worn on occasions that call for something fashionably chic or casual—an alternative to dressing up for events,” he concluded.

Amina Aranaz, designer of Aranaz bags and a member of FDCP, showed her bags, masterfully embodying a Filipiniana vibe for modern women who want a dash of nostalgia in their ensemble for JC’s collection.

The show was in cooperation with four media partners and major sponsors BMW and Metro Pacific Investment, plus Patrick Rosas for hair and makeup; Grace Molina, project coordinator and director; and Manila’s Prince of Fashion himself, Inno Sotto, as creative director.

Bazaar for a great cause

The Catholic Women’s Club’s yearly in-demand event, Casa Y Jardin Bazaars, will have two bazaars to be held at the Grand Ballroom of Hotel Intercontinental on Oct. 16, Sunday, 9 a.m.-6 p.m., dahlings, with the sale of Limited-Edition Mother and Child Plates chaired by Nina Dizon, Maritess Pineda and Joey Sobrepeña. On its 26th series, the featured artist for 2011 is the well-known visual artist Anita Magsaysay-Ho, no less. The 90th anniversary commemorative plate marking CWC’s 90th year is by National Artist Carlos “Botong” Francisco.

The committee, under the leadership of dedicated president Mimi Valerio, has Nikki Valerio as chair  and Ane Preysler and Terry Tambunting as co-chairpersons.

Check the bazaar out, palanggas, it’s totally for a good cause. Visa and Mastercard credit cards will be accepted.