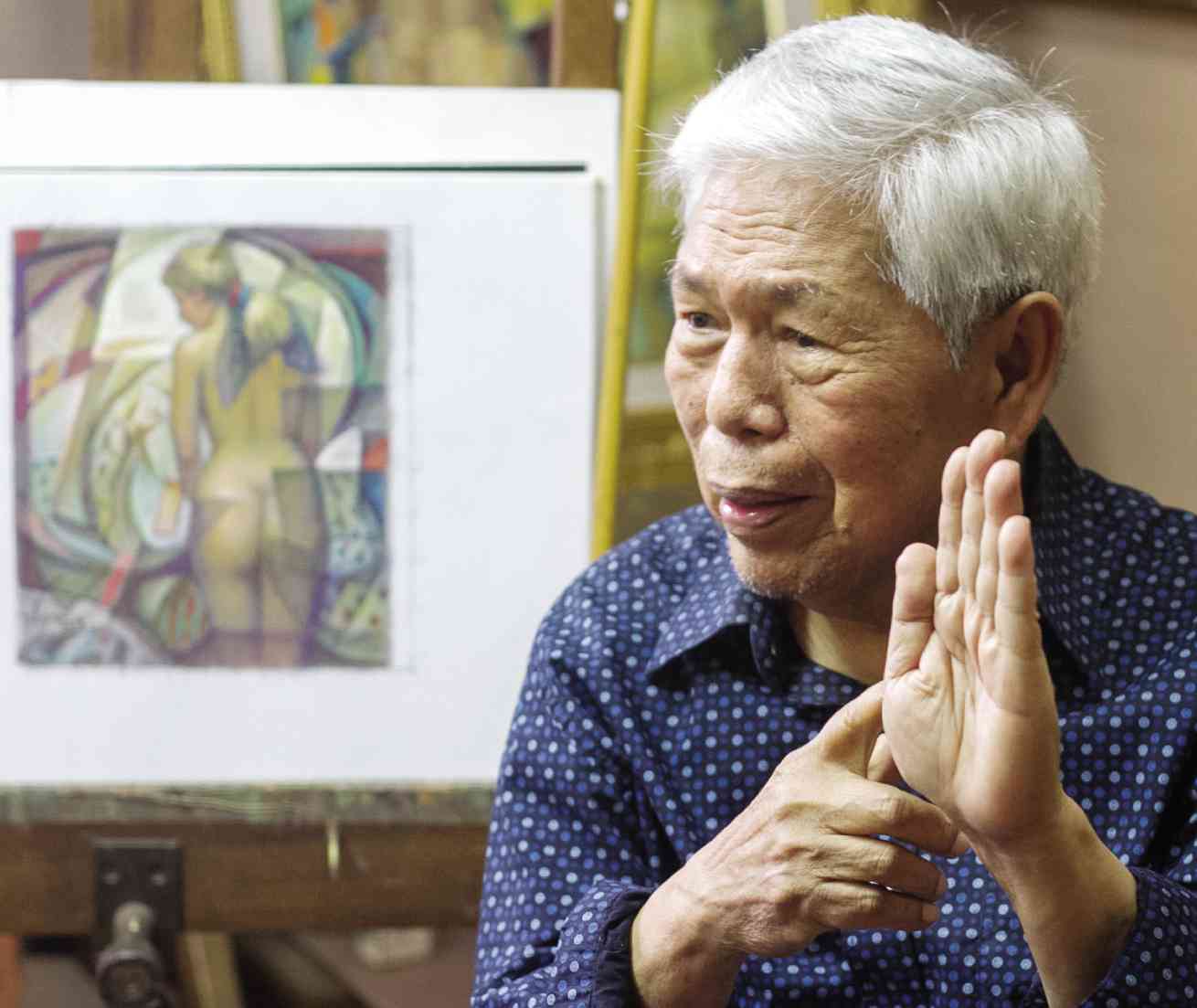 Surrounded by his paintings, Sofronio Ylanan Mendoza eats lunch, alone and quietly, in his condominium unit in Metro Manila one early afternoon.

The Canada-based artist flew into town recently. He is prepping for his first major one-man show in his hometown Cebu.

SYM, as friends and fans fondly refer to him, is obviously excited. “This exhibit is a showcase of what I have done for the past 50 years,” the 80-year-old grandfather explains.

There will be pieces in the realistic style that had made him a presence in the arts scene—as mover and founder of the Dimasalang Group in the 1960s.

Most of the works to be sent to Cebu, however, are huge canvases done abroad, in a style that he developed and dubbed New Millennium Cubism.

One painting propped up against a desk features local vegetables like an eggplant and string beans.

Yes, the vegetables are on canvas, but they appear to exist on different planes. A red fruit and a pitcher are not round but multifaceted, and seem to be cut diagonally.

“The subject is not important anymore. It is how I treat the subjects. I dissect them interestingly to make them profound and complex,” he says.

SYM points to a spot where a basket is highlighted.

“The basket is round. The background is also round, so that the roundness of the basket radiates and expands. This shape should be repeated somewhere else. The eggplant is also rounded to repeat the shape.

“Ang kontra ngayon dito is a geometric figure. When the round figure is beside something sharp, the curve is stressed by the angular contrast,” he explains.

SYM says the complexity of the images stems from how he paints them “in dissected space.” He then refers to Russian painters Kazimir Malevich and Wassily Kandinsky as inspirations.

“Malevich talked of space in nonspace,” says SYM. “The complexity is in how I arranged the shapes interestingly and in a personal way. I thought about how it was to be done while I was doing it at the time.”

SYM likens his work to music that “also has repetition of sound and rhythm. So in art, shapes are also rhythmic; sharp edges can be repeated all around. So there are two movements—round and sharp,” he explains.

He talks of what he perceives as violent opposition from certain sectors in the local arts scene, following his shift from the realistic and figurative style taught by his maestro, Martino Abellana (a protégé of Fernando Amorsolo) in Cebu in the late 1950s, to his current one.

SYM says the evolution began in 2002 in Canada, where his family migrated in the early 1980s. After decades of painting landscapes, portraits and various commissioned works, he began to dabble in images of vegetables in the cubist style and incorporated components of the mythical sarimanok in the background “to produce a swirling effect.”

“I wanted to include our cultural background and fuse it into my art.  I wanted it to be sariling atin, and not simply adopted from the style of foreign painters,” he notes.

He says his shift is part of a growth process that cannot be suppressed by observers and market forces.

“My talent is a gift, and I told Jose that to be able to change is a privilege not accorded everyone. One day, I will leave this planet and never come back, so I intend to use this privilege,” he says.

“I don’t care, as long as I’m happy with what I’m doing.  Kung ’di nila magustuhan, pasensya na,” he shrugs.

Noted art dealer Didi Dee says SYM has always preferred to swim against the tide. His nonchalant attitude towards critics should not be surprising.

Meanwhile, writer/artist Alejandro Roces, author of the coffeetable book on SYM, “The Power of Struggle,” noted his fighter’s instinct early on.

Roces traced this to the time Abellana, the first mentor based in Carcar, Cebu, urged SYM to go to Manila to further his craft.

SYM, then in his late 20s, managed to scrimp P25 and applied for a scholarship at the University of the Philippines’ College of Fine Arts in Diliman.

Professor Tomas Bernardo told the young man his lack of a permanent address forced judges to declare a runner-up as winner.

Undaunted, SYM returned to Manila a year later with P5 in his pocket and a third-class boat pass that allowed him to sleep with pigs traveling via Aboitiz Shipping from Cebu.

Bored during the trip, SYM volunteered to draw the deck pursers who, impressed with his work, spread word around the ship about the talented artist holed up in the top deck.

News reached the captain, who summoned SYM to his cabin. After seeing the drawing handed to him, the captain, only known as Rodriguez, offered SYM accommodations in his plush residence near the Jai Alai building along Taft Avenue.

But SYM would have none of it.  Living a more challenging life, one exposed to harsh realities and harder choices, was part of his agenda in Manila.

A referral from Abellana opened doors to decrepit ateliers in Ermita. SYM was immediately welcomed. A young colleague, Fred Villanueva, eventually invited him to his home in Bulacan.

Villanueva’s father Ulpiano, aka Amang, was very impressed with SYM’s talent and sent him to the University of Santo Tomas to study Fine Arts, while offering him accommodations in Bulacan.

SYM later transferred school to the University of the East, which he represented in several major art competitions, including an on-the-spot art contest for art students sponsored by Shell.

He came home with the P500 grand prize that he turned over to Amang.

Vilco’s then unknown artists went on to attract art lovers including business executives, Imelda Marcos’ blue groupies and a certain Don Luis Araneta, who raided Vilco’s premises one time and bought everything on sight.

SYM married Amang’s daughter Elena (Ely). Some time later, newspaper editor and visual artist E. Aguilar “Abe” Cruz became acquainted with SYM and the Vilco gang. The two gentlemen formed the first Dimasalang Group of artists that later spawned two more, including a third that SYM established in Canada when he settled there.

SYM would return to the Philippines several times to hold exhibits and give art lectures. There were also visits to Cebu, but never for a one-man show.

“All these complexities in my current work, hindi nangyari nang isang araw lang.  It was a slow evolution of personality, vision and concept until such time na nag-manifest sa trabaho,” SYM points out.

The issue of marketability comes up. It’s possible, he says, that an artist attains a level of comfort that makes it difficult for him to think of change.

In this situation, SYM wonders whether the artist could be capable of producing “another work of art better in terms of innovation and physical beauty.”

The challenge remains how to do something creatively. And if such requires change, so be it.

He adds that even while he was still Abellana’s apprentice, “aware na ako na maiiba ang gawa ko kesa sa aking maestro, but at the start, you cannot avoid that your work is influenced by your maestro. But as you said, the influence of Abellana is no longer that visible in my current work, except for my use of color. He taught me modulation, paano mag-produce ng malinis na color. Merong mga batas or system on how your color can be clean.