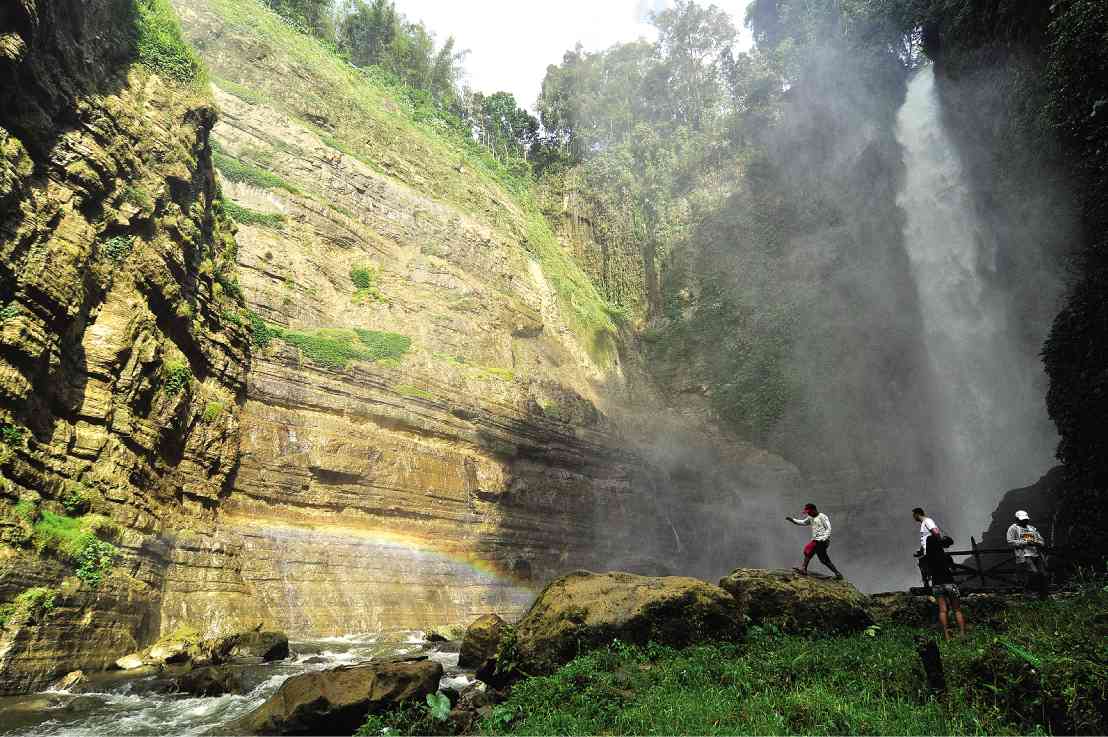 ONE of the renowned Seven Falls in Lake Sebu, South Cotabato

Strange that some Filipino travelers are familiar with what’s going on in places like Inner Mongolia and yet have no clue about many Philippine must-see sights and must-go sites.

Soccsksargen (South Cotabato, Cotabato, Sultan Kudarat, Sarangani, General Santos, comprising Central Mindanao, or Region XII) is known to most Filipinos for its alliterative acronym, Manny Pacquiao, the T’boli,  Dole pineapple, and sashimi-grade tuna. But many probably can’t zoom in on the spot on the map.

We were one of those who were left in the dark, for instance, as to what was there in Lake Sebu in South Cotabato, until we recently flew to General Santos City and drove straight from the airport—past Polomolok (of Dole fame) and the provincial capital Koronadal—to this fabled place in the Valley of Allah.

Imagine our surprise then to find it’s not just a lake but a whole town, a first-class municipality with 19 barangays of some 100,000 people, 68 percent of  which are indigenous (T’boli, Ubo, Tiruray, Manobo) and 32 percent are migrants (Ilonggo, Bicolano, Ilocano).

And the body of water is not circular, like Laguna de Bay or Taal Lake, but amorphous, a 364-hectare lake containing 11 islets. It has been recognized by the national government as one of the country’s most important watersheds.

Fish cages crisscross off its shoreline. European-style chalets dot its ridges. Concrete paths are making inroads into its hinterland. Tourism is rearing rampant all over the place. (Obviously we’ve come too late to experience its pristine garden state, as we once experienced Boracay in its gasera days.)

Punta Isla Lake Resort in Sitio Toku-ful is where you can have a panoramic view of the place. Situated on a ridge, it has terraces, a patio, and dining areas on decks where you can comfortably sit and watch the evening twinkle on the lake and the mist rise on a hill. Or you can go boating late in the afternoon, circle a few lake islands, and get closer to the egrets and kingfishers skimming over the surface of the water or just standing still on flotsam.

A feature in the resort that shouldn’t be missed is the cultural entertainment after dinner (not during, as the T’boli consider it bad manners to be eating while a performance is going on, since its core is always religious ritual). Tribal culture is often inspired by the natural environment, and as these people were originally animists, their dances mimic the behaviors and gestures of animals such as monkeys and birds, even flowers and the wind.

Another lakeside resort that has such spectacular view is Monte Cielo. Here you get a vista of the whole lake, while from the opposite side you see an expanse of rice fields in a sunlit valley—so that’s 2-in-1.

Visiting and staying in the resort is by endorsement only, though; and service is highly personalized. Home cooking is a feature of its restaurant, highlighted by the various ways of preparing tilapia freshly caught from the lake.

Fishery and aquaculture are lucrative and thriving in Mindanao. Just as GenSan is known for its tuna, Dipolog for its sardines, Sarangani for its bangus, Lake Sebu has come to be known as the Tilapia Capital of Soccsksargen.

While travelers may feast on the tilapia and get curious about the lake’s sulfuric water, tourists mostly come for the sights and leisure. A major attraction is the ecotourism park developed by the provincial government, a jumping point to the Seven Falls, Lake Sebu’s interconnected waterfalls varying in height, breadth, magnitude and appearance.

You can espy four of these beauties without getting wet by taking the park’s famous zipline. Two lines run along a ravine cleaved by lush vegetation, one measures 740-meter while the other is 400-meter. If you take them one after another, zipping 20 meters per second over a snaking waterway and a rainbow, you’re experiencing the longest zipline in the country.

At 180 meters above ground, it is touted to be one of the highest ziplines in Southeast Asia. So you not only have a bird’s-eye view of the place but also feel like a fledgling on its maiden flight.

All these make Lake Sebu one of the prime ecotourism destinations in the region. But tourism is not only about beauty spots and biodiversity hotspots. There is also cultural tourism here.

The highlight, of course, is the arts and crafts, lifestyle and beliefs, customs and traditions of the T’boli, the native dwellers known for their dreamweaving, fine brassware and colorful costumes, bracelets and anklets with tiny bells whose tinkling heralds their approach.

You can have a glimpse of their way of life by visiting T’boli Museum, a native dwelling that’s a comprehensive showroom of T’boli culture, from household utensils to weapons of war.

The museum is owned by Datu Bao Baay and this is his personal collection. It would greatly help if he’s around when you visit as he can give a lucid explication of everything on display.

Connecting with the spirit of the abaca

Ever present is the t’nalak, abaca fiber dyed in red and black then woven into patterns of the weaver’s dreams. The weaving is an arduous process, taking 25-30 days before an item is considered finished. It takes 4-6 months to produce 6 meters of cloth.

Dreamweaving is on the brink of extinction, says ecotourism guide Roy Ungkan. There used to be 11 dreamweavers in Lake Sebu, but all have passed away except for 90-year-old National Folk Artist Lang Dulay, and she stopped weaving 10 years ago.

She is training 16 weavers in her house, which is also the School of Living Traditions, in Sitio Toku Lefa at Barangay Lamdalag, 5 kilometers from the poblacion. But not just anyone can be a dreamweaver. One has to “connect with the spirit of the abaca” before one can weave one’s dreams. Lang Dulay’s students themselves cannot weave from dreams; they only reproduce their mentor’s original patterns.

For livelihood, and to support the school, they sell to tourists bolts of t’nalak, tubao, brassware, beadware, even coin purses and cellphone holders made of t’nalak. Swathes of t’nalak signed by Lang Dulay go for P2,500 per 3 meters—such a small price for such a glorious cloth.

On the way back to General Santos City (popularly GenSan), you can stop by Koronadal (popularly Marbel, B’laan term for “murky waters,” from its river), a smaller but more orderly city; and slow down along the highway of Polomolok to see part of its 12,000-hectare field of pineapples. The landscape here is dominated by Mt. Matutum (2,293 meters above sea level), a dormant, cone-shaped volcano.

Lying at the head of Sarangani Bay, GenSan is the country’s southernmost city. It is the province’s center of trade and commerce, the region’s shopping capital, and one of the country’s fastest-growing cities. It is also called the Boom Town of the South.

GenSan was formerly called Dadiangás after a thorny tree with poisonous berries that used to thrive here but is now rare and a protected species. To memorialize this place-name origin, one tree has been planted on the grounds of Notre Dame of Dadiangás University, and another at Plaza Heneral Santos.

In the plaza stands a monument of Gen. Paulino Santos, after whom the city was named. He was the leader of the 62 pioneers from Luzon who came to this Promised Land in the late ’30s under a Commonwealth program.

The university has a museum, the Gen. Paulino Santos Museum, that houses his memorabilia. It also has a corner devoted to the memorabilia of world boxing champ Manny Pacquiao.

Waves of migration from Visayas and Luzon followed in the ’40s and ’50s. Thousands came, dislocating the original settlers, the B’laan, most of whom lost their livelihood and were driven to the mountains.

While Koronadal is mostly Ilonggo, majority in GenSan are Cebuano speakers. The city is predominantly Catholic, about 80 percent of the population. Across the plaza, toward the sea, is the Church of Our Lady of Peace and Good Voyage, built in 1957.

The city has two festivals: the Kalilangan in February, a cultural festival spearheaded by Mindanao State University; and the Tuna Festival, a thanksgiving celebration that falls on the city’s charter anniversary on Sept. 5.

GenSan has been known as the Tuna Capital of the Philippines since the early ’70s. But many are unaware that the premium fish, the yellowfin, is actually caught from international waters in the Pacific, off the coasts of Indonesia.

GenSan is just the trading port for the fish harvest, accounting for the second-largest daily catch of fish in the country after Navotas. It has seven tuna-processing plants, its state-of-the-art fishport complex an impressive sight from the highway.

In the outskirts of the city, rising amid an expanse of karst terrain, is Jam’s Restaurant that specializes in tuna-based dishes. The memorable preparations use all parts of the fish from head to tail, including eyes, skin and entrails; only the fins and scales have been excluded.

A city since 1968, GenSan has an international airport, the biggest in Mindanao and the ninth busiest in the country. The flight from Manila takes one hour and 55 minutes, while the  drive to Lake Sebu is about an hour and a half.

All this is ancestral domain, says Datu Benito Blonto, municipal tribal leader of the T’boli. But due to poverty, a few are selling parcels of their land to developers, though this is forbidden by law.

Book a visit to that Little Baguio of Soccsksargen as it is cooler there, rainfall is evenly distributed throughout the year, and Koronadal Valley is typhoon-free. Now is the time to go when there still remain unspoiled patches in its landscape.