The haven of the faithful where the Blessed Mother wears a maternity dress | Lifestyle.INQ ❮ ❯ 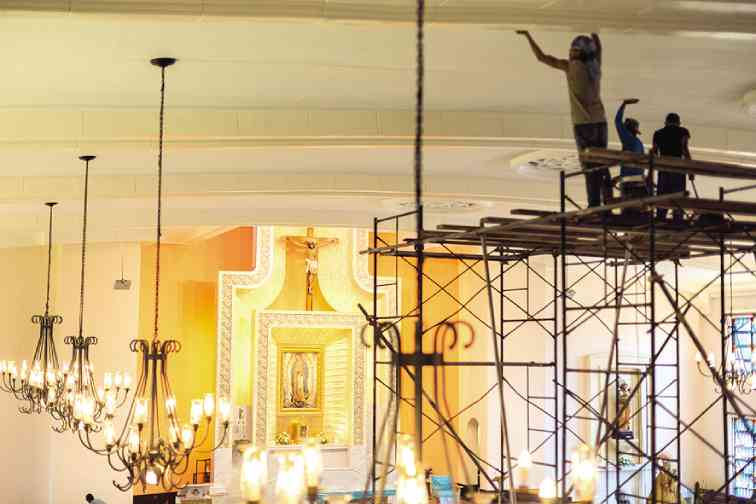 THE SCAFFOLDING used by workers is removed when there is a HolyMass.

The rest of the city had already succumbed to the languor of the afternoon heat, but inside the National Shrine of Our Lady of Guadalupe in Makati, half a dozen people were praying intently.

Phase two of the church’s renovation is in full swing. Carpenters operated a screeching mechanical saw right in the middle of the church. The faithful were unmindful.

Fr. Roderick Castro said having visitors at unlikely hours has been typical since the church has been declared a national shrine when he took over as parish priest and rector in February 2010.

Three sectors stand out among petitioners, he noted. These are the very sick, the old and those wanting children. Numerous stories of cancer patients and those with eye and heart problems visiting the church and offering prayers abound.

Fr. Castro recalled one such case of a woman who was given only several months to live who chanced upon the 12 noon mass and suddenly felt as if cold water was being poured on her.

“She walked on her knees from the entrance to the altar, unmindful of the others. When she reached the front pew, she sat down and cried until the mass ended,” the priest said.

The woman has since recovered and visits the church frequently until now.

The Guadalupe Shrine is also a haven for childless couples. After all, the Lady of Guadalupe is known as the Patroness of the Unborn.

“Our Lady of Guadalupe is the only image of the Blessed Mother that is pregnant. People would note that she wears a maternity dress,” Castro said.

“Note that during those times, women wore a belt at the waistline, but she wears hers near the chest, meaning she is pregnant,” he added.

“There are those who want to have children who come here and their prayers are granted. Hence this church has also enjoyed an image as a pro-life shrine,” the priest pointed out.

Castro added that Luis Cardinal Tagle has given a special privilege to all priests of good standing who hear confessions inside the church.

“When the priest hears someone who confesses (participation) in an abortion, he would have the faculty to remit the penalties of abortion and absolve the penitent,” he said.

“Hindi lahat ng simbahan at shrines may ganoon. As far as I know, here in the Archdiocese of Manila, only Quiapo and Guadalupe (have been given that privilege),” the priest noted.

As it is, Castro said that under Church rules, only a bishop could absolve a case of abortion that he hears in the sacrament of confession.

Their sheer number has encouraged parishioners to ask Castro to initiate improvements inside the church to make it worthy of being called a national shrine.

The priest explained that once a church is given national shrine status, it becomes the “mother of all shrines” dedicated to the specific patron saint.

“A parish church belongs to the local community. An archdiocesan shrine belongs to the whole archdiocese. This means the devotees of other parishes, say in the Archdiocese of Manila, can go to this shrine and pray to Our Lady of Guadalupe,” he said.

Castro said that back in 2010, the newly declared national shrine was a far cry from how it appears now. The interiors were dark and the midday heat emanating from the iron sheet roofing made contemplation uncomfortable.

“Even the stained-glass windows were faded. People said hindi bagay ang hitsura for a national shrine. They wanted the church’s look to befit its new status.”

Castro said he was amazed at the parishioners’ determination to renovate their church. One of their projects was to distribute iCans or small coin banks that they filled with donations. The priest was touched at the sight of small children lugging cans filled with coins to church.

Of the P16 million raised through various efforts, P14 million came from the people.

Phase two of the improvements began in May 2014 and includes the interiors, ceiling and windows. A quick perusal earlier this month showed a new and dramatically lit retablo that showcases the altar that is a sight during Holy Mass.

Enjoying pride of place is a duly certified replica of Our Lady of Guadalupe, the image of the Blessed Mother that appeared to Juan Diego of Mexico.

Castro said Monsignor Diego Monroy of Mexico sent the replica in 2011, and it bears the seal of the Archbishop of Mexico.

The church is now waiting for more donations so that the church can begin phase three, which focuses on the church exterior. So far, a private construction company has already donated bricks that would be used for the façade.

Also in the works is the construction of an adoration chapel that will feature a secondary relic of St. John Paul II.

Castro said the late pope used the altar table that will hold the Blessed Sacrament during his first visit to the Philippines in 1981.

The altar table stayed at the Apostolic Nuncio in Manila. But when the pope was set to make a second visit in 1995, “some of the items were disposed of. (The late Jaime) Cardinal Sin gave this altar table used by Pope John Paul II to Guadalupe. We’re planning to use this now in the adoration chapel.”

Many of the sick who hear about the relic visit the national shrine and ask to touch the relic from John Paul II, although it is still kept in a private room.

Castro said having an adoration chapel would finally give the relic a home it deserves.