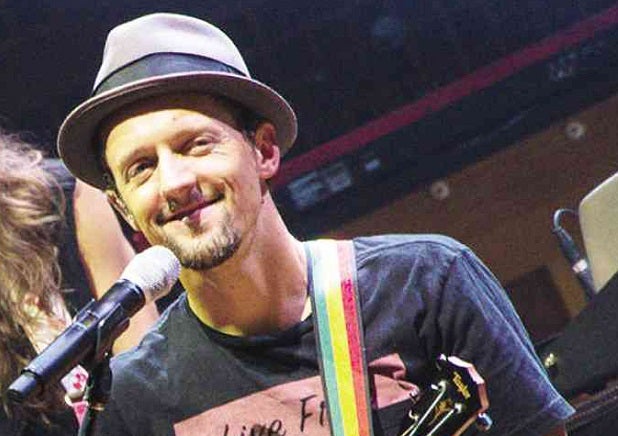 It’s five days before Jason Mraz returns to Manila for a concert on Nov. 27 at Smart Araneta Coliseum—and we hope to catch the show because this would be our first time to see him perform live.

The music of the American singer-songwriter of Czech descent has been a constant presence at home; its engaging mix of folk, rock, reggae and blues is the type of modern pop that is accessible to both young and old generations.

We’re surprised to find out that his latest record “Yes!” is actually his first acoustic album—considering that Mraz has always been identified as a folkie with an acoustic guitar and even a ukulele.

In any case, his concert at the Big Dome will feature the all-girl band Raining Jane, with whom he recorded “Yes!”

Speaking of the Big Dome, that was quite an enthusiastic crowd we saw at the venue during the 2014 Myx Mo! concert party that featured dozens of Filipino artists including Gary Valenciano, Rico Blanco, Sponge Cola, Kamikazee, Chicosci, JayR, Karylle, Kyla, KZ Tandingan and other ABS-CBN talents.

Watching the performances, we appreciated the ABS-CBN network’s long-term commitment to run a music video channel as a showcase of the best as well as up-and-coming bands and solo acts in the country.

MTV Philippines might be gone, but Myx has stayed on. It’s a cause for celebration, indeed, as the music channel remains open to all kinds of music—including the street-corner pop humor of Rocksteddy and the emotionally tortured hard rock of Save Me Hollywood.

We finally had the chance to visit, for the first time, 71 Gramercy—the upscale club located on the 71st floor of the 73-story Gramercy Residences in Makati.

The occasion was the first anniversary party of Smart Communication’s music streaming app Spinnr, which had DJs playing dance tunes and Taylor Swift appearing in a video to greet the Philippines and premiere her new single “Blank Space” from her new album “1989.”

Now that online streaming is the most popular way people listen to music, it’s good to know that Spinnr has over 300,000 paying subscribers, plus more than 3 million visitors who could, later on, also serve as potential revenue for both Spinnr and—no matter how small—for the composers of the songs licensed by MCA Music, Sony and Universal Music, including local tunes.

The event also launched SPINNR Radio, which offers continuously playing songs without requiring data or  music subscription. (To access, download SPINNR via the Play Store/App Store or log on to spinnr.ph and click Radio.)

As for 71 Gramercy, it’s quite cozy for a crowd of about a hundred; it’s also open for dinner from 6 to 10 p.m., before the party people take over till the wee hours.

But what we look forward to is going back there before dusk, so we can have a view of the skyline while enjoying a few drinks.

It was also our first time to visit Tipsy Pig, described as a gastropub or a pub that serves high-end beer. We were immediately impressed by its creatively designed wooden interiors.

We didn’t check how expensive the imported beers were, although we settled for the all-malt San Miguel Premium Beer, plus an order of Tipsy Wings or fried chicken wings with homemade Jack Daniel’s BBQ sauce (P295).

A young DJ started spinning music around 11 p.m.; his repertoire included remixed versions of 1980s classics like Tracy Chapman. He could tone down the volume just a bit, although the place had good acoustics.